You are here: Home / Uncategorized / mcfarland usa – a review

It’s no secret that I love movies. I could probably, happily, go to the theater five days a week. One of the local theater chains actually has a pass where you pay a monthly rate, and you may attend as many showings as your little heart desires.  I’ve considered purchasing that pass.

I come by it honestly. I was a Motion Pictures major in college, specializing in screenwriting. I visited LA in my senior year, touring studios, meeting agents and producers, and generally being blown away by the Hollywood glamor. But my insecurities got the better of me, and my scripts remain locked away in a hidden location, never to be exposed by human eyes. When I graduated, I scored a job working in (trade) magazine publishing and moved smoothly into sports and event marketing.

To date, one of my favorite leisure activities is sitting down to watch a well-written, beautifully filmed, brilliantly acted and exquisitely scored film.

McFarland USA is based on the true story of the unlikely and inspiring rise of the 1987 cross country team from McFarland High School.

Kevin Costner plays the role of Jim White, a high school football coach whose bursts of temper have made him persona non grata on the more desirable California campuses.

However, a job offer comes from McFarland High School, located in McFarland, California, which is described as one of the poorest towns in America. White relocates his wife and two daughters to the heart of this small, predominantly Mexican-American small town, where he finds himself in another world, culturally and socially.

At first, White makes no effort to relate to his students or to fit into his new home. He sees this job as a stepping stone to another opportunity and has no plans to stay any longer than necessary. However, after he challenges the head coach to protect an injured student during a football game, he finds himself ousted from the assistant position, but still employed as a teacher at the school.

With time on his hands and the realization that some of the students in his PE class can run, White undergoes a crusade to create a cross country team to compete at California’s first invitational track and cross-country event. The principal gives his grudging blessing and White goes to work.

Kevin Costner did a lovely job portraying the humbled coach who brought hope to a town where hope was gone. In a place where the the town prison was located directly across the street from the high school, and where students started their days before the sun, picking in the fields to earn money for their families, before a full day of classes and then back until dark, without much complaint, dreams were created and realized. 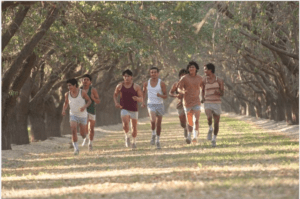 Maria Bello was flawless as Cheryl White, a wife trying to support her husband through his times of poor judgment and give their daughters a home and family of which they can be proud. Carlos Pratts did an outstanding job in the part of the anguished but dauntless Thomas Valles, walking the tightrope of seeking his father’s approval while daring to dream of something more. And I really can’t say enough about newcomer Ramiro Rodriquez’s role as Danny Diaz, one of the three Diaz brothers on the original team, the anchor who bound the group.

The story is filmed against the sweeping backdrop of the San Joaquin Valley, at times dry and dusty, but at others, so bright with color and majesty it takes one’s breath away. Filmed on location, it was easy to capture the spirit and soul of the McFarland streets and neighborhoods, lending an authenticity to the overall production.

This is a story of passion and dedication, family and brotherhood, trust and redemption, inspiration and triumph. These are universal messages that apply to running and to life, and they will always stick with me.

I’m probably going to need to see this again in the theater, either with Mr PugRunner or with some running friends.

Have you been to see McFarland USA yet? What did you think?