Last month, Wendy from Taking The Long Way Home suggested the idea of a Running Book Club. I’m always on board for reading new things and having a way to share opinions on them so I was quick to sign up. 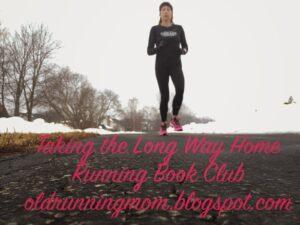 This month’s selection was Honey, Do You Need A Ride? Confessions of a Fat Runner by Jennifer Graham. 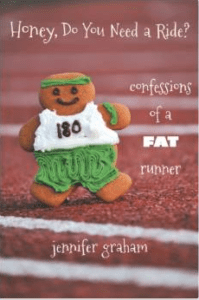 I was kind of excited to dig in to this. I mean, that gingerbread cookie on the cover looked mighty delicious, and I really like reading stories of people who run and find joy in it, who maybe aren’t conventional in terms of size, shape and skills.

This is journalist-turned-freelancer Jennifer Graham’s story of accepting herself as a “real runner”. A “fat runner.” In short, disjointed chapters, that lend themselves better to newspaper columns than a cohesive book, we learn some details about Graham’s life.

We jump around a bit, covering her father’s abandonment of the family, her grandmother,’s overindulgences via food, her less than athletic endeavors into organized sports, the teachers in high school and college who treated her poorly for her weight and who inspired her for her writing talents.

Graham started running because of a dream she had at the age of 25. In it, she is running around the lake of her childhood home, in perfect form, without, as she details, breaking a sweat. This is the thing that propels her from the couch and into her sweatpants and sneakers, for the very first outing of her running career.

In stacatto snapshopts, we learn about her four children. Her husband. Her moves to different houses and different cities. Her divorce. Her donkeys.

She shares the anxiety that comes with searching for and finding the outfit that makes you feel great about yourself when running. The joy of the runner’s high. That feeling of running your first 5K and worrying that you don’t belong there, until you get out there and know that you do.

She also shares a little about her marriage and its end and the role that running, among other things, may have played. I found this to be the most interesting and valuable portion of the book (next to Ensuring Your Escape Artist Donkeys Can’t Escape and Don’t Own A Horse That Wants To Kill You). Having some individual interests is generally a healthy thing for spouses, but lack of support and understanding from the other partner can drive a wedge into or put up walls around a relationship. This is absolutely not specific to running, but I appreciated Graham’s honesty about how it all played out in her situation.

In her head, Graham talks to the ghosts/spirits/essences of Steve Prefontaine and George Sheehan. They speak to her and about her in her own, ongoing inner dialogue. They push her out the door and down the road when she’s not feeling the urge and they alternately encourage and disparage her into testing her limits. Coaching and support is always important, even if it is from two gentlemen who have departed from the land in the living.

She runs her first half marathon in Kiawah. She struggles, as most runners do. But she pushes through and overcomes, and we understand the joy a simple bowl of hot bean soup at the end of a hard-run race can bring.

Then we find out that Jennifer Graham is 5’5″ and 155 pounds at her heaviest. And that she is running 10:00 – 12:00 miles. The photo of her provided at the end of book reveals a rather regular and ordinary woman. 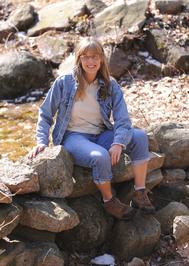 Certainly not anyone that would fit the traditional definition of “fat.”

Graham addresses that criticism in the book itself, in what may be complete body dysmorphia: “Imagine that… after a lifetime of torment suffered by this particular descriptive, I find myself enthusiastically defending my right to be fat.” She goes on to reply to a commenter on Runnersworld.com with “I love you, Kaleidescope Eyes, but “Confessions of A Runner with Not Exactly A Hard Body” just doesn’t have the same ring.”

So what we have really is “Confessions Of A Somewhat Ordinary Runner With Low Self Esteem and Poor Body Image Who Disparages Herself and Lashes Out At Others.”

Because that’s what really struck me about this book. As a person who probably doesn’t fit the conventional stereotype of how a runner looks, who has overcome feeling of shame and anxiety about getting out on a public road and running (in time, even daring to run in public in OMGSHORTS!), I was hopeful to connect with Graham.

Graham attempts to be funny and self-deprecating, but for me the humor falls, awkwardly, short. There are a few amusing moments, but what sticks out the most is an uncomfortable, underlying bitterness.

What Graham seems most perturbed about is what people think of her as a “fat” runner. Unfortunately, she doesn’t afford much kindness towards “you skinny people”, the “shirtless wonders.”

There are plenty of disparaging digs throughout “Confessions of a Fat Runner”, where the reader realizes that while Graham doesn’t give herself much grace, she clearly has none to spare for others either. “This is the truth: On this planet, small people are going to laugh at you, no matter what size you are or what you do.” And on her “perfect, thin, beautiful cousin Stephanie’s divorce” she has this to say:  “…there was a small, guilty part of me that, despicably, relished this news.”

For me, statements like these are cringe-worthy and detracted from any solidarity, and occur far more than necessary. What Graham shares of her life certainly has its downs and disappointments and while she is honest about how they have rocked her, the truth is that not even running has helped her recover from the things that are hurt deep down inside.

In her stories of the challenges she faces in the sport, I think Graham really disproves her own theory that she, as a “fat” runner, is somehow set apart from the rest of the running community. The self-doubt, the anxiety, the lack of motivation on some days, the search for the perfect sports bra or shorts… those are things that all runners experience on the regular. Whether we way in at 100 pounds or 400 pounds, we have these in common, which, at the end of the day, is what binds most runners in camraderie and make the community so great. It’s a little sad that Graham doesn’t seem to realize or embrace that.

Needless to say, this was not my favorite and I walked away hoping that Graham is able to find her peace and learns to be kinder to herself in her running journey and in her life.

If you read it, what did you think of Honey, Do You Need A Ride? Confessions of a Fat Runner?

What are your thoughts on exaggerating on a title in order to entice readers?

Next month, we will be reading and reviewing Hal Higdon’s 4:09:43: Boston 2013 Through the Eyes of the Runners. 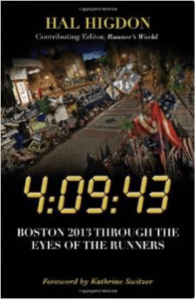 This will be a gutting read, but the stories from that fateful day in history certainly need to be told.