I received free entries to the March To Get Screened 5K Run/Walk Event for myself and for purposes of a giveaway as compensation for promoting and reviewing the event. All opinions are my own.

Last Sunday morning, I bundled up and made the drive to the gorgeous Jacksonville Beach Fishing Pier to take part in the March To Get Screen 5K Run/Walk Event, which is held in honor of Colon Cancer Awareness Month, and whose purpose is to bring attention to the prevention and treatment of colon cancer through regular screenings.

I had the privilege of attending the run last year, with my mom. (It was her first official 5K. We need to get her back out there). 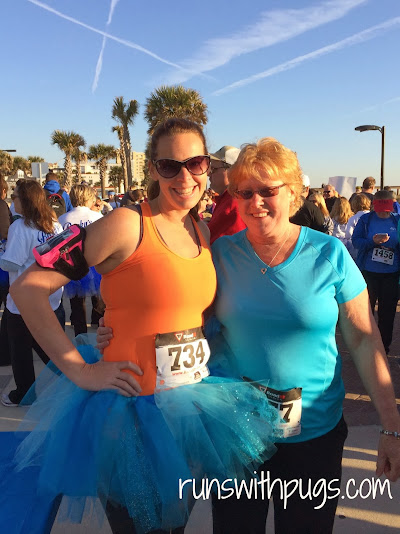 I was injured and so we joined the walkers, but this year, I was ready to run my heart out.

Packet pickup starts about an hour before the race, so I had planned to be at the venue on the earlier side. The event had grown in size since last year, but pick up was very well organized, and festive with lots of blue.

I collected my bib, chip, drawstring bag and shirt, and then made my way back to the car to sit in the heat for a few more minutes. The temperature was in the mid 40s, and since we were on the ocean, there was a rather nasty wind with which to contend.

Brrr. I was glad to have gloves and my ear warmer.

After thawing a bit, I went to the portapotty (there were only two at one end of the parking lot), and then headed over to the pier area to meet up with friends

We stayed in the staging area, to keep out off the windy beach.

Close to 9:00, we made our way closer to where March To Get Screened founder Jan Pratt thanked everyone for their participation and shared her story of surviving colon cancer. Her strength and desire to help others is truly inspiring, and it was wonderful seeing survivors, their friends and families and supporters all together, ready to run for the cause.

We made our way down to the beach. It was warming up a little, but not too much.

The sand was nice and packed, which was just fine. Beach running is tough if the sand isn’t right but it didn’t look like we would have any problems.

It was go time.

The course was just a simple out and back, from the start line, under the pier, down the beach and back again. There is one water stop right before the turn. On the way down, the sun had warmed things up enough for me to shed my gloves. I debated ditching my ear warmer, too, but I hated to lose it. After the turnaround, I was pretty glad I had held on to it. The headwind was quite brutal.

Sharon, Kristin and I crossed the finish line together and rejoined the group.

Mr PugRunner and little man were there, too! They had planned to participate but with little man’s breathing issues, they ended up sitting out. We were going to have breakfast together, but first…

Mr PugRunner offered to put our name on the list for breakfast at a diner down the road, while we headed across the street to Lynch’s Irish Pub.

Runners were given tickets for complimentary beer.

And we sat back to listen to Darren Corlew.

We wanted to see S get her award, but they weren’t scheduled to announce until about 90 minutes after we had finished the race, so we said our goodbyes, and headed to join the boys for breakfast.

I absolutely love March To Get Screened, and everything it symbolizes. I am glad we were able to raise awareness for colon cancer, support such an important cause and run in the midst of those who have been touched, in some way, by such an awful disease. It was an honor to be a  part of it all.