I’m going to go ahead and toot my own horn, here. This week was epic. It was one of those weeks where breakthroughs happen, resolutions are made and goals were met.

It doesn’t happen very often, so when it does, I would say it’s reason to celebrate. Let’s check it out.

After having stayed up WAY too late on Saturday, it only made sense that little man would be ready to hunt for his Easter basket before the sun came up.

He’s such a morning person. 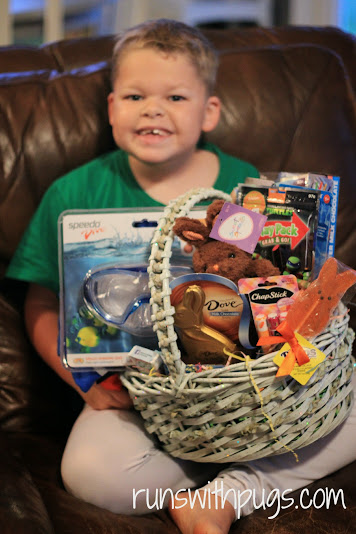 Mr PugRunner made these adorable, Pinterest-inspired pancakes for breakfast, and then it was time to get to work.

I put the ham in the oven and my cousin helped me make these deviled eggs.

Mom and Dad brought homemade macaroni salad and cheese, crackers and olives, and we made sautéed Brussels sprouts and tiny little potatoes with rosemary, pepper and salt.

For dessert, we had the knot cookies and strawberry shortcake. It was a great holiday.

We were sorry to see everyone to go home, but little man had school the next day.

I woke up on Monday feeling pretty lazy. A day of eating and a few glasses of wine will do that to a person. I knew I had to go for a run, but I really didn’t feel like it. I procrastinated by chatting on my Facebook page with some awesome supporters regarding switching up my intervals. I am going to save the specific details for another post, but basically, I decided to try changing my 3:1 intervals to 1: :15 intervals. In my head, I thought it would be easier, but I was also hoping that I would be faster.

It was certainly not easy, but I can’t say I wasn’t thrilled with the results. I had to wonder if it wasn’t a fluke, but I was excited to try again.

After dropping little man at school, I was off to work for a great day. I was eager for an early night’s sleep for another crack at my new intervals.

I had to squeeze in this run before the rest of the household woke up, so I didn’t have any music to help push me on my way.

It seems it didn’t matter.

With a race coming up on Saturday and another one the following Thursday, I turned my thoughts a bit more seriously towards a PR.

After a shower, I had to head to the local Athleta store to pick up my packet for the Cupcake Run benefitting Girls on the Run Northeast Florida. I had registered on Monday, but by Wednesday, I started getting emails stating that the run had severely underestimated the numbers of registered runners and there were all sorts of disclaimers about getting t-shirts, personalized bibs and custom medals. While it was nice to see the great response, I was a little annoyed by the lack of organization and preparedness. I wash hopeful that cupcakes at the finish line would make up for any little snafus along the way.

We had work and then it was off to dinner and little man’s first baseball game since his illness. It was a bit of a rough night for him – he was up a bit later and running around a little more than he has been due to his breathing. His team won, though, which was nice to see.

Instead of running, I went for a stunning, four mile walk with a friend. We went up and over my favorite bridge, and then down to the beach. It was warm but breezy, and absolutely glorious. We could see all the sailboats coming in for the weekend’s boat races, and I have to say, it was a sight to behold.

It was one of those good-for-the-soul kind of walks, and it just started the whole day off right.

Later, I had lunch with my parents (and scored the most delicious pea soup leftovers from mom’s kitchen), and then came home to wait for little man to be done with school for the week.

We went out to a really yummy Mexican restaurant for dinner, even though I had a race in the morning. I played it safe with plain tacos, rice, beans, and then threw caution to the wind with one margarita and some spicy tomatillo sauce.

Today was the moment of truth. Time to see if my new interval plan was effective.

I will have a complete race report up this week, but I will give you a little spoiler: I had a HUGE PR!

After getting home and cleaned up, we spent the rest of the day at little man’s baseball game with my parents, and then at Home Depot for some stuff for the yard. I was absolutely exhausted and ready for bed when we got home, and I was pretty excited for a quiet Sunday.

This was the best training week I’ve had in a long time. In spite of some not so wise nutrition choices, I was able to achieve the one thing I’ve been working on this year: a sub 30 minute 5K.

Now, to make it happen in a race situation, where it really, truly counts 🙂

What’s a challenge you have overcome?