The Beson4 Media Group Corporate Run was an interesting one. 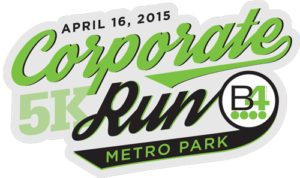 For one, it was on a Thursday. For another, it was at night.

I’m fairly certain I’ve never raced midweek, and I am really sure that I don’t care for night running.

But, I’m all about participating, and joined up with my company’s team.

I arrived at Metropolitan Park at around 5:00, to get my packet and be on hand for team pictures. The field was completely decked out in corporate tents, with ever increasing numbers of people arriving. It was great to see the matching team shirts and enthusiasm from all around.

I loved the setup – everything was nice and centrally located, in easy reach of real restrooms. That’s always a plus as far as I’m concerned.

The start time of the run was pushed back to 6:45 PM, so I was there a good bit of time. However, it was nice – we did pictures and chatted and stretched.

As the start time approached, we headed over to the start line. I positioned myself a little closer to the front than I normally would. I knew there were going to be a lot of speedy folks out there, and I may have overestimated myself. Live and learn, right?

When the gun went off, I went off with it. My strategy was to start my intervals as soon as the crowd thinned and I could get to the side, but there was a flaw to this brilliant plan: the crowd took a while to thin and there was no way to get over. Oops. I ran about a half mile at a (for me) searing 6:00 pace, and I was done.

The course was nice and, most importantly, different. It wound through some little residential neighborhoods in downtown Jacksonville that I don’t remember seeing before, so it was nice to have a change of scenery. There were some little, rolling inclines that were most certainly annoying, especially after my failed heroics at the start, but I kept with it. Maybe I slowed down a bit during running and maybe I added a few extra seconds to some walk breaks, but that’s the consequence I had to pay.

It wasn’t a complete failure: I didn’t PR, but it was my second fastest 5K by over a minute, so I really can’t complain.

I found my way back to our tent, where the party was in full swing. There were hot dogs, chips and salsa, cookies, beer, wine and frozen margaritas.

Few things are better after a hot run than a frozen margarita.

I had a little something to eat and hung out a bit more, before calling it a night. Construction has been pretty awful in and out of the city and I wanted to get home to a nice shower.

All in all, I would call it a success, and a fun way to spend a Thursday night.

What are your thoughts on night racing?

Do you ever run with a team?