You are here: Home / Uncategorized / disney dream: let’s sail away with mickey!

Read about boarding the Disney Dream and our first day here.

After the muster drill, we parted ways again. Nana and Papa Bear wanted to go up to get a great spot for the Sail Away Celebration, and we were right behind them.

We got a great spot along the railing on Deck 12, and Mr PugRunner scored us some frosty, tropical cocktails.

The party was packed. Mickey and the gang, in their cruise attire, danced and sang on the stage, while the audience rocked out right along with them.

It was high-energy and very cute. I think it was a must-do for a first-time DCL sailing, but I’m not sure if it will be imperative the next time we go. We will play it by ear in the future.

I almost didn’t notice we were moving. Until I did.

For better or worse, we were cruising!

I had started taking Dramamine when I woke up that morning, and put on Sea Bands right before we boarded. I was a teensy bit queasy once I realized that we were pulling out, but it wasn’t overwhelming, which was a blessing.

After the party, we wanted to check out the Open House at the Oceaneer Club.

Little man hadn’t entirely decided if he was going to spend any time in the kids’ club. We were hoping he would, because it looked like there were so many cool activities offered in there, but if he didn’t want to, that was ok, too.

The kids’ club is broken into two connected sections: the Oceaneer Club and the Oceaneer Lab. The two areas are connected by a lab/kitchen area. There are all kind of nooks and crannies for reading, watching movies, playing video games, cooking up experiments or treats, drawing, making crafts, dressing up or just playing. There is story time and character appearances and all kinds of special activities.

The area is kids only. Children check in and out with their Magic Bands. They must wash their hands in high tech washers on the way in and on the way out, which is such a great habit to enforce.

No adults are allowed except the cast members who works in the clubs, unless there is an open house. When the children are ready to leave, cast members use the ship’s wave phone system to contact parents via text, and parents report to the club. They must provide their Key To The World, be identified by photograph and provide a password in order to collect their children. All in all, it was a great system.

There is a huge interactive play floor for games and dance parties.

and the Monsters Inc Laugh Floor.

Little man loved it and said he wanted to go back after dinner. Fantastic! We thought we would hit up the Golden Mickeys in the theater while he was there.

By then, it was about 5:25 and we had Main Seating dinner at 5:45 in the Enchanted Garden. We were heading over, when I noticed that Mickey was out, taking pictures on one of the balconies. It looked like we would be ok to hop on line and get a picture.

We were one of the last to be allowed in the queue, and it made us about 10 minutes late for our meal. Normally, I wouldn’t care, but when we arrived in the Enchanted Garden, we saw that we were seated with another family: a couple and their 6 year old son. We apologized profusely for being late, introduced ourselves, and got down to the business of getting to know each other.

They were incredibly sweet, and even though we didn’t realize that with a party of five, we would be placed with anyone else, it worked out fine.

Our servers, Darmika and Keneisha, were absolutely lovely. Service was on point and they made some excellent recommendations on menu selections. I appreciated that they took extra special care with the boys, quickly learning their favorites, joking with them, putting their place settings near each other and other little nice touches.

Dinner was very nice (I will do a complete rundown of each dining room and the meals separately), and we enjoyed the company of our new friends.

While dining, we discussed our evening plans. We had originally planned to go to the show, but little man and his new buddy started talking pool and AquaDuck. Apparently, it’s quite an experience riding at night. Little man decided that instead of the Oceaneer Club and Lab, he wanted to get back in his trunks and go to the pool, and at first we tried to dissuade him, but then we figured what the heck? This was his vacation as much as any of ours, and how often do you get to go swimming at night on a cruise ship, with a movie playing on the Funnel Vision and a giant, enclosed water flume? Not often.

We returned to our cabin to get changed as the sun was setting.

It was nothing short of glorious. Mr PugRunner pointed out that there were dolphins leaping next to the ship, and while I wasn’t able to get good pictures of it, it was truly one of the most beautiful things I’ve ever seen.

I could have stayed on our verandah all night. 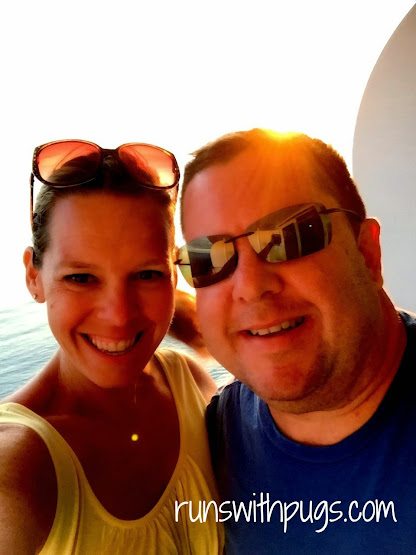 I had to take care of a couple of things, so the boys headed off to Deck 11. It took about 20 minutes for me to start heading up the stairs with my pool things, but it turns out, Mr PugRunner and little man hadn’t gotten very far. I found little man sitting on the steps while Mr PugRunner was standing with a young man who was having a medical emergency. It was really scary and I grabbed little man to take him upstairs and out of the way, while Mr PugRunner and another guest were able to get a staff member who was then able to call for help. Mr PugRunner was an EMT way back in the day, so it’s nice that he is able to offer a little bit of assistance in situations like these (good news: Mr PugRunner saw the young man the next day at the pool, and he was doing great).

Since we weren’t sure how long Mr PugRunner was going to be delayed, we set up camp next to Nana and Papa Bear, who had grabbed chairs on Deck 11, facing that night’s movie on the giant screen. And then it was up to me to brave the AquaDuck with little man! Ack!

It. Was. Freezing. The line was much shorter than it was in the afternoon – we basically walked right up and on – and when I was finally able to open my eyes after the first big rush of water, it was such a cool view!

When we got off, I bundled up in towels, and little man found his dinner buddy. Mr PugRunner had arrived, so the guys all headed off into the Mickey pool, while I sat down to warm up and watch some of Hercules.

At the end of the movie, we decided to call it a night. We would not be getting off the ship in Nassau the next day, but we wanted to have a nice breakfast, explore the ship, and try to take advantage of everything there was to do on board. And to be honest, it was a long day and we were exhausted.

It took everyone a few minutes to fall asleep – I could feel the rocking of the ship in the bed, but finally, we managed to drift off, dreaming of the fun we would have tomorrow.

Tomorrow’s installment: My birthday at sea and how we spent our day onboard!

What was the most beautiful sunset you’ve ever seen?