Another fantastic week in the books. Long runs are happening, and we are getting closer and closer to Rock N Roll Virginia Beach! Holy moly!

The 4th of July partying wasn’t over! We were invited to a pool party at a friend’s house, and we spent a great day enjoying the water, yummy food and great conversations.

Mr PugRunner even got to take little man out on a wave runner for a bit.

I may have experienced a mild panic attack when a massive thunderstorm started rolling in while they were out exploring the canal, but fortunately, they were able to get back to the dock right before the lightning started, and I earned the title for Most Chill In Time Of Crisis.

On top of all that, it was time for Shark Week!

How I love Shark Week!

Morning came too soon, but I was up and out for my 3.1 miles. The run must go on, right?

Little man started karate camp this week as well. He would also be participating in his first tournament on Saturday, so when I dropped him off, I had a conversation with the studio owner regarding a schedule for his extra training. It was going to make a busy week for us, but worth it.

Little man had to be at karate by 7:45 to get a jump on his training, so we were all up and about with the sun.

After work, I had to go grab him from camp, get him home for a shower and quick dinner, and then bring him back for tournament class, where he could work on polishing his forms. It was really cool getting to watch all the tournament team members in action.

Confession: Wednesday morning was hard. I was just so tired and when the alarm went off at 5:00 AM, I couldn’t bring myself to get out of bed. Ugh. Mr PugRunner came to the rescue and told me to get a little more sleep – that he would take care of getting little man packed and off to camp.

That freed me up to run my seven miles without the stress of a deadline.

When we all got home that evening, I decreed that we were going to have a fun night. We rented Paddington on pay-per-view and ordered pizza from Papa John’s. It was l0w-key and little man got a kick out of dinner delivery. Sometimes, family time is really all that’s needed.

Another packed day of early karate and late tournament team class. My legs were tired and I was really missing my cross-training. Oh, well.

This was kind of a fun day. I did two miles in the morning because I was planning to run again in the evening

The rest of the day, I ran some errands and made some pie. After all, our evening run was going to be pie themed, so I put together a lattice-top cherry pie and a mint chocolate chip ice cream pie with fudge topping and oreo crust. Also, some silly medals for afterwards.

It was freaking hot, even at 7:00 PM, but I powered through the next two anyway.

After all, it meant spending time with these great ladies.

After partaking in some of the delicious pies that were served, I had to call it a night. We had an early morning on Saturday.

We had a great breakfast and then headed off to the church where the karate tournament would be held.

Little man did some practice with the other members of his team, and then it was time to begin.

He did a great job on his routine, and didn’t seem nervous at all, even though he was doing his forms in front of judges and an audience.

There was some tough competition, but he did great and seemed to love it.

We went out to lunch, and then, to finish the celebration, we went to see Minions. 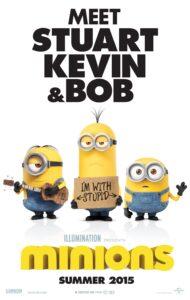 It was a darn good day.

And with fourteen miles logged, it was a darn good week.

I am looking forward to a few new experiences in the upcoming days. I am a big fan of breaking out of my comfort zone from time to time, and I can’t wait to share what I’ll be up to.

I am also pretty happy that this week will be a little less stressful than last. Little man can enjoy all camp has to offer, and then we have a few weeks off before school starts. I’m already planning out a couple of day trips for him and me. He’s a great road trip buddy and we are going to have fun.

What’s your next race or event?