I had to delay this post a bit due to some travel over the weekend. However, running was done, quite a bit of it, actually, and therefore, it must be logged.

I figured that Sunday would be my best chance for a long run, so I took the opportunity. Unfortunately, I left the house a bit later than I had planned, which meant I had to contend with a bit more heat and humidity than I would have preferred.

I wasn’t going to let excuses get me down, so I filled up my handheld bottle, stashed my Gu, and headed out.

It wasn’t the worst rune even, but man, those are a lot of miles.

I was beyond thrilled to take a nice hot shower, and then chill out for a bit. Mr PugRunner took little man to the movies and I honestly just plopped myself down on the couch and did exactly nothing.

We have been having some nasty afternoon storms, but prior to that, little man and I were able to go to a playdate at the beach. Little man has gotten rather brave with the water, but the water was pretty rough so he played with his buddies on the sand instead.

Afterwards, I drove him up to my mom’s house for a few days. They wanted to take him to see the Minions in 3D, so we didn’t visit long. Which I got home, I was hoping to see Jurassic World with Mr PugRunner, but he wasn’t really up for it, so we stayed home and watched The Maze Runner, instead.

My new running group is falling into place, and we had a beautiful sunrise outing for three miles. 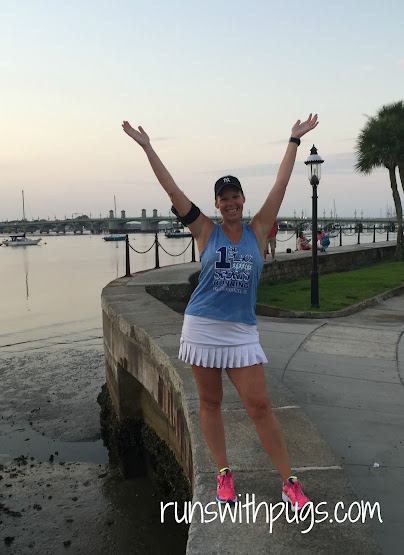 After work, I headed home to change back into running clothes. We had another group run for work. Oh, yeah. Two runs in a day!

Let’s just say I was sleeping before my head hit the pillow when I got home.

I pretty much had a free day, so I treated myself to Jurassic World on my own. It was incredibly cheesy, but I really enjoyed it, and it was a great way to unwind before another work run. 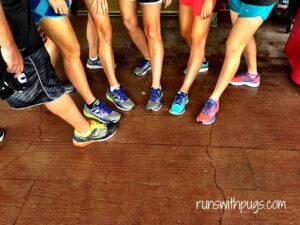 Another mile, another late night. I was wearing right out. No stats because I loaned my Garmin 220 to Mr PugRunner. Who decided he loved it and needed it. We made a deal where I gave him my red and black one and would purchase a purple and white one for myself. Everyone wins!

I wanted nothing more than to stay in bed, but I had people waiting for me. It’s amazing what motivation that can be.

My legs were absolutely fatigued, and in spite of the awesome company and beautiful views, it was the worst run I’ve had in a while.

Rather than getting some down time, I had to pack. We were taking a trip to the west coast of Florida to spend some time with Pop and Grandma, for their birthdays (one day apart), as well as one of my brothers-in-law, my sister-in-law and our niece. I’m usually great about organizing in advance, but I put this one off to the last minute.

Mr PugRunner had his long run scheduled so I finished packing and tidying while he was out so we could be ready for the drive after his shower. The rainy, three hour drive was pretty draining and we were thrilled to finally reach our destination.

The awful weather ensured that I had no pictures, especially none of our delicious, celebratory oceanfront dinner. Boo.

We woke to even more rain. It’s so rare to get full days of precipitation in Florida and it was just so yucky.

Fortunately, we had plans to spend the day with loved ones, enjoying each other and a home-cooked birthday meal. I’m so glad we were able to have that time together. We stayed late into the night, just chatting and sharing memories, before heading back to our hotel to get some sleep.

My July is going rather well. Just one more month, give or take, until the Rock ‘n’ Roll Virginia Beach Half Marathon. Eek! I got a chance to chat with my brother-in-law about the course and the experience this weekend (he’s run it several times and it’s his favorite race), so it’s getting even more excited.

How was your last week in review?

How often do you road trip?