You are here: Home / Uncategorized / legoland hotel: everything is awesome

Legoland Florida is located about 45 minutes south of Orlando (and the rest of the theme parks), in a town called Winter Haven. Which, in and of itself, is a lovely little town, but is a bit out of the way, especially from all the hotels and areas with which we are familiar.

Over the past few years, several friends have made suggestions about the limited hotels available outside the Legoland park, but in May of 2015, a new possibility arose. 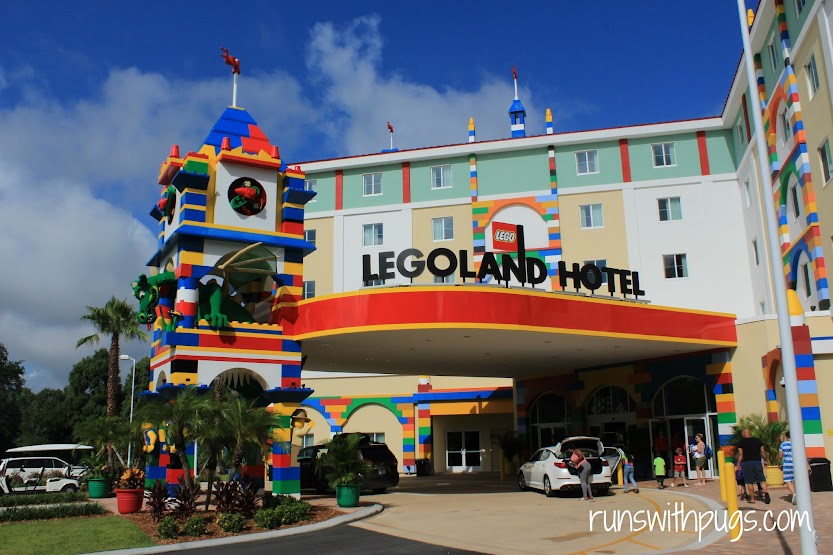 Positioned about 100′ from the entrance of the theme park, the Legoland Hotel is… well, it’s pretty awesome. And pretty pricey (a commenter in my last post mentioned a rate of $600 a night – we paid a little less than half of that, thank goodness, but it was still more than we would usually spend). However, after comparing to our options, and considering that this was pretty much a one-time, one-night splurge, we decided to go for it and booked a Pirate-themed room.

Little man had no clue.

After saying goodbye to our family, we started the trek up I4. Little man was very insistent on knowing where we were going because he didn’t really recognize the route. We managed to hold him off for the duration of the drive, and when we pulled into the Legoland grounds, he got very quiet.

And then he said he had caterpillars in his tummy.

The lobby of the hotel was fantastic. Everything, everywhere seemed to be made out of bricks. The wall behind the front desk was lined with minifigs 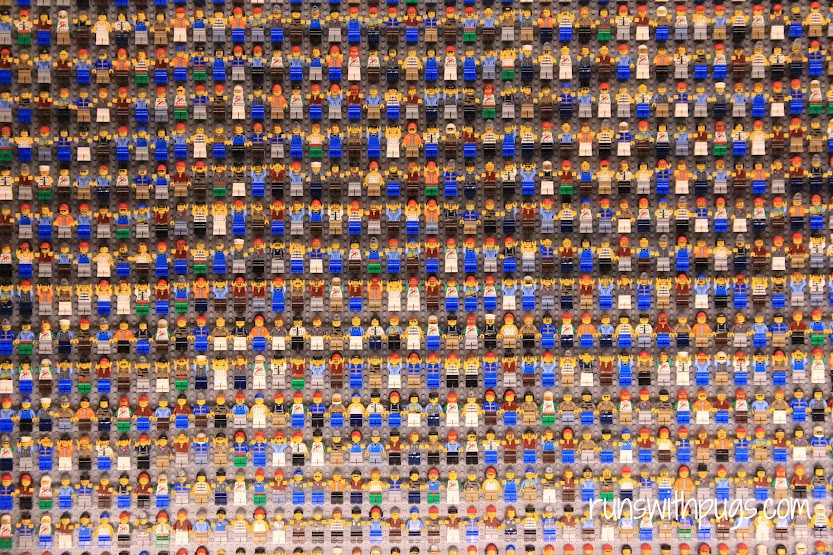 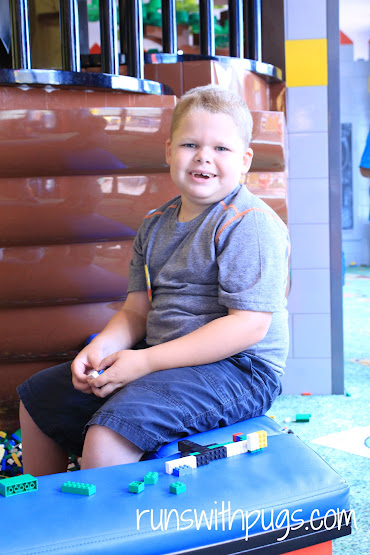 Past the elevators was a huge play structure, part castle and part pirate ship, surrounded by more pits of bricks. 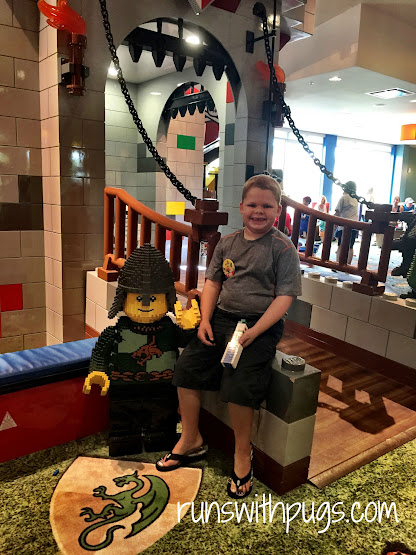 Our room wasn’t quite ready, but we were permitted to store our bags with the concierge and make our way to the park. They would contact us when our room was available.

By this time, it was around 9:45, right before the official park opening, so we headed over to purchase our tickets. We ended up with annual passes because it was only a $10 difference between day tickets and the pass, and we would also get access to the water park, early admission and 10% discounts on all purchases, including food and drink.

We got the call as we were finishing lunch in the park and decided that we would head back to check things out. Mr PugRunner arrived ahead of us because little man wanted to hit one more ride on the way, and texted to say that it was amazing.

He met us in the lobby, and we hopped into the elevator for our trip to the second floor. I’m not going to give too many details, but the elevator is pretty damn special. 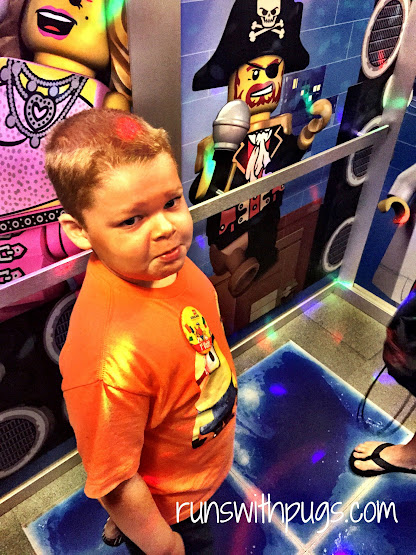 Little man was thrilled with our room. He loved the theming and he was enamored with his own private space (with a sign that said “no adults!”) with a bunk bed and TV. 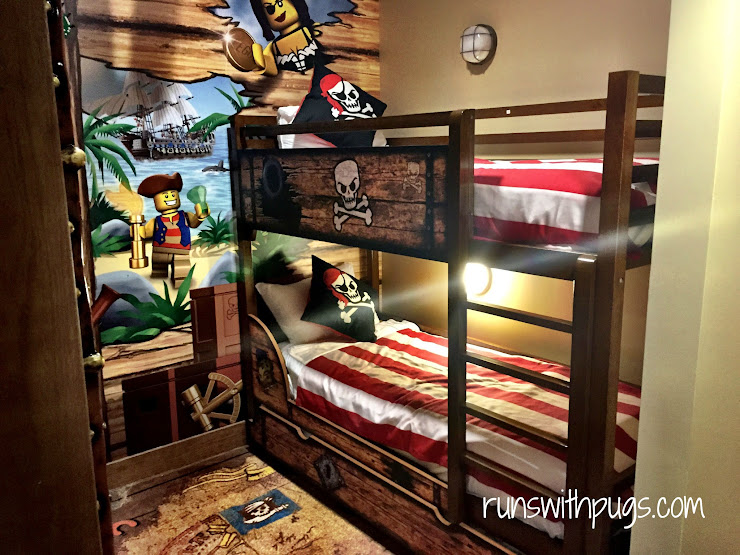 There was also a nice king-sized bed for us with a lovely view of the pool and some of the park. 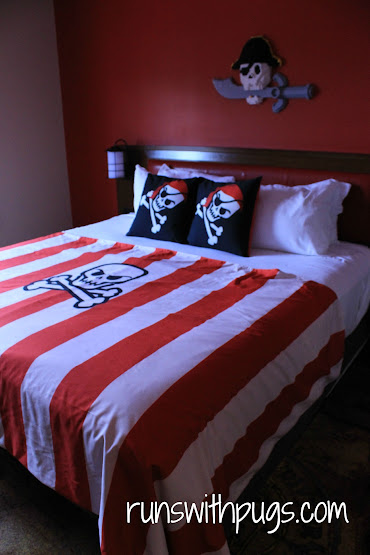 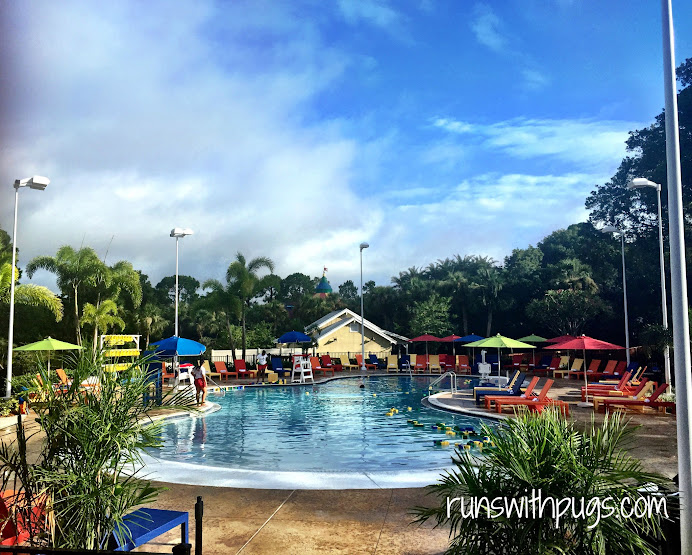 When we entered the room, there was a padlocked chest on the floor with instructions for a scavenger hunt in order to find the combination for the lock. 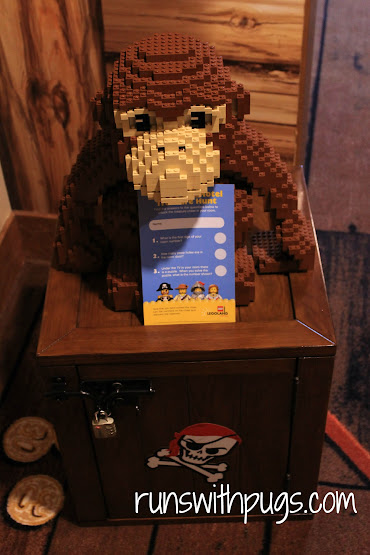 It took a few minutes for little man to crack and the code and we opened the chest to find a stash of Lego Mixels, juice boxes, activity packs and Lego Club magazines. He was thrilled. 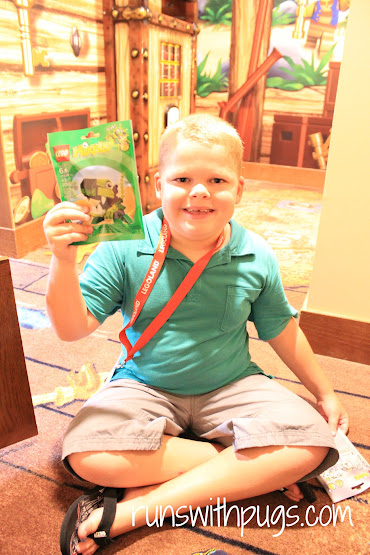 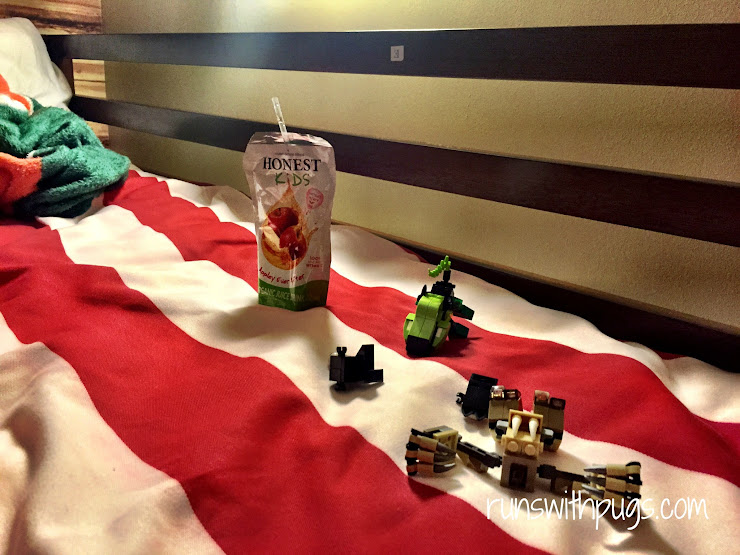 The Legoland Hotel provided plenty of entertainment: in addition to the play areas mentioned earlier, there was a small store, a kids “club” (a small room near the bar with Lego bricks, building tables and family-friendly movies on loop), character appearances, 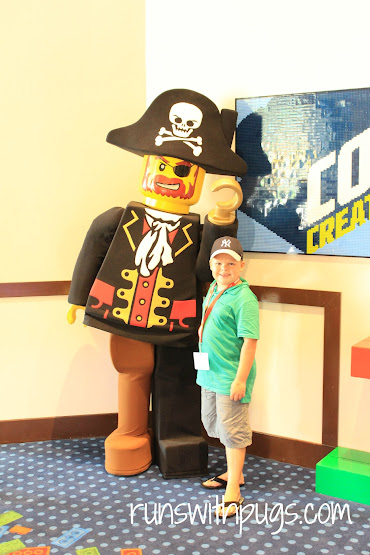 building classes and live interactive games (including a PJ dance party). The park may have closed at 7:00PM but there was still plenty to do.

Our afternoon at the water park was cut short due to nasty storms. We were drenched when we finally got back to the lobby and I was thrilled that some of the staff were waiting with a cart of fresh towels for the soaking guests. It was a minor glitch in the plans, but it was ok because little man got to build some cool things and play with other kids. 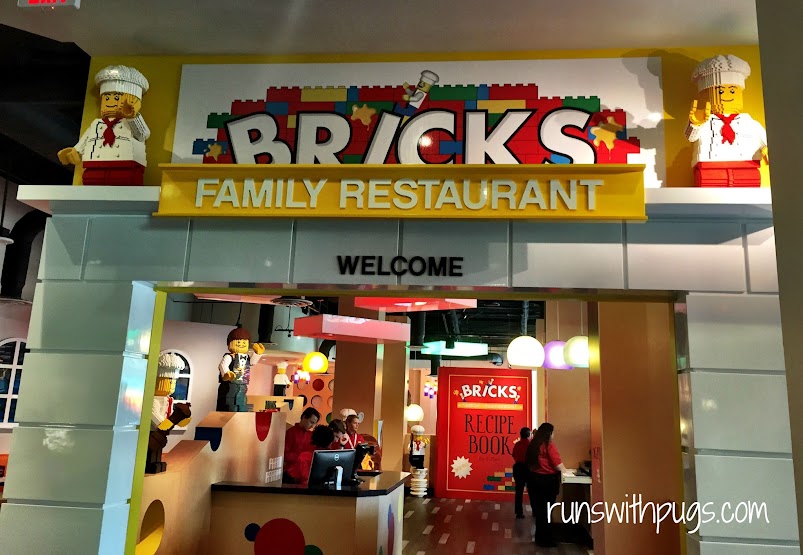 There is also a lounge with a full bar, located not too far from the play structure. Guests can order appetizers and dinner from a menu and eat at tables with a view of their kids. 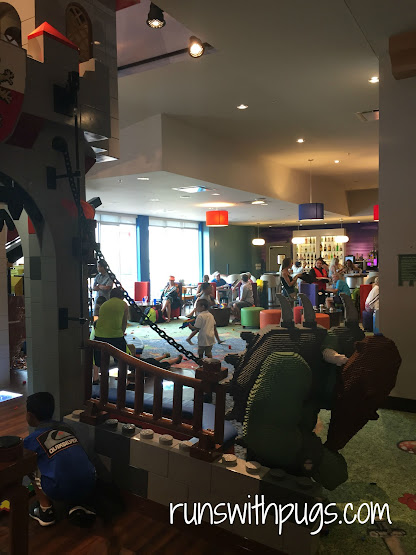 Dinner was very good. There was a fresh salad bar, a carving station with two meats, a pasts station and all manner of sides and desserts. The food was fresh and turned over quite frequently. 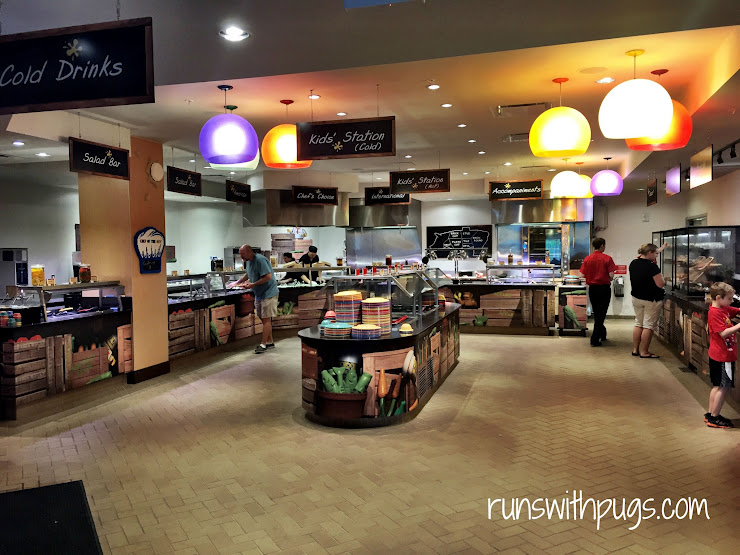 Breakfast was… edible. The omelet station was packed and I didn’t want to wait, but I wasn’t really in the mood for waffles or pancakes and so I picked at a french toast stick, yogurt with fruit and granola and some grits. The meal was included with our stay and there was plenty from which to choose – it just wasn’t my favorite meal.

At each seating, there were character appearances – both times we saw one of the Lego Friends (I have no idea which one), but they were cute and sweet and made lovely conversation.

All in all, I am so glad we made the choice to stay here. And I’m pretty sure this sums up little man’s feeling on the subject. 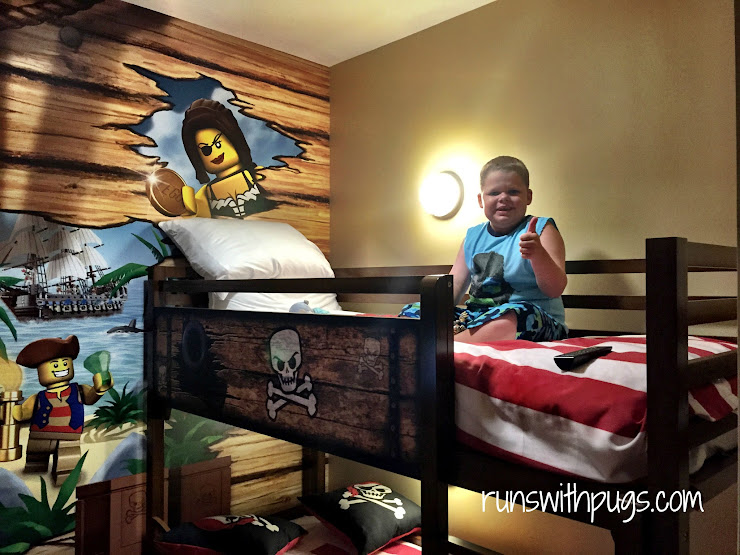 Do you ever splurge on a special hotel when traveling?

What’s a special touch a hotel can offer that makes a difference to you?