Mr PugRunner and I were pretty excited to head north for the Rock ‘N’ Roll Virginia Beach Half Marathon. It would be our very first Rock ‘N’ Roll event, and my first race in a different state (Yes, I think it would be incredible to run a race in every state. Two down, 48 to go!)

We had been looking for an event to run together, and while we had originally looked at the runDisney Wine & Dine Half in Orlando, RnR Virginia Beach was at a better time of year for us, and packed an extra bonus: we would get to spend Labor Day weekend with my brother- and sister-in-law, nieces and nephew! This is an event my brother-in-law has raced eight times and so it was also nice to be able to do something on his turf that he loved, especially considering he came down to support me during the WDW Marathon.

Labor Day Weekend is a huge deal in the northeast – it’s the last hurrah before school gets back in session and people spend the weekend at the beach (or shore, if you’re from NJ). It’s been quite a while since we actually did a “beach weekend”, and it was exciting to pack up the sand chairs and beach toys for the occasion.

We checked into our hotel, the Holiday Inn Hotel & Suites Virginia Beach – North Beach on Friday morning. This was one of the Headquarter Hotels for the race, and one of the more reasonably priced ones when we booked. We were at the far (read: quiet) end of the boardwalk, oceanfront, on the second floor with a view of the pool and the beach.

The accommodations were fine. The nightly rate was high for a Holiday Inn, and it was a certainly an older building, but the rooms were clean and the staff very friendly. We gave up on the elevators entirely and we did have to have service when we realized that our faucet and half the outlets didn’t work, but once that was handled, the rest of the stay was perfectly pleasant.

After a breakfast of delicious pancakes with the family at the Pocahontas Pancake House,

We got checked in and into our bathing suits.

The weather was  gorgeous, and I was able to sit and catch up on my reading while little man did some boogie boarding.

We enjoyed lunch at Cabanas at the Sheraton,

and I was thrilled that the weather was actually chilly. In fact, I had to put on a long-sleeve hoodie (and cracked up when one of the servers commented on it – if he only knew).

With full bellies, we left little man in the charge of his cousins so we could hit up the expo.

The conference center was about a ten minute drive from our hotels. Since we were still early in the day, it wasn’t at all crowded, and we had our packets in a matter of minutes.

Brooks had a huge space inside the expo, full of cute race-themed and regular apparel. We also had to make a stop for Mr PugRunner to get some Bondi Bands, and for his brother to sign up for next year’s RNR Virginia Beach. We checked out the latest flavors of Gu (Yay for apple, boo for maple bacon) and admired all the RNR medals on display.

There weren’t a ton of installations, but enough to make for some good browsing.

After we got some pictures, we made our way back to the hotels for dinner. We stayed up super late, wandering the boardwalk. Fuel was playing at one of the concert venues,

and little man took a bike ride with his cousins.

It was a great night.

Although I probably should have gotten some sleep, I wanted to try to see the sunrise and go pick up fresh donuts with my brother- and sister-in-law. Unfortunately, the weather was not cooperating.

Of course, donuts can brighten any day. These were made fresh and topped when we ordered. I was so excited to try Duck Donuts, and was NOT disappointed. I only wish we had one closer to home.

Little man slept LATE, so I hung out with him with Mr PugRunner went to hang out with his brother. When everyone was up and running (figuratively), we tried to go to the outdoor pool, but the wind was insane. Therefore, we gave the indoor pool a try. Little man has never before experienced an indoor pool and he loved it!

We had some excitement that afternoon when the power went out, affecting about four or five resort blocks. Yikes! It lasted just over an hour, but they did get everything up and running, in enough time for me to get dressed to head out to dinner with family.

Our reservations were at Mannino’s Italian Bistro, just a few blocks away. I was very impressed by their special menu for the evening

and ordered the tortellini, which was delicious.

I had a lovely glass of pinot noir to settle my nerves, and then we made our way back to the hotel to get some shut eye. We set out our outfits and gear (at which point I realized that I had left my arm pocket at home, which led to all kind of pouting and readjusting). 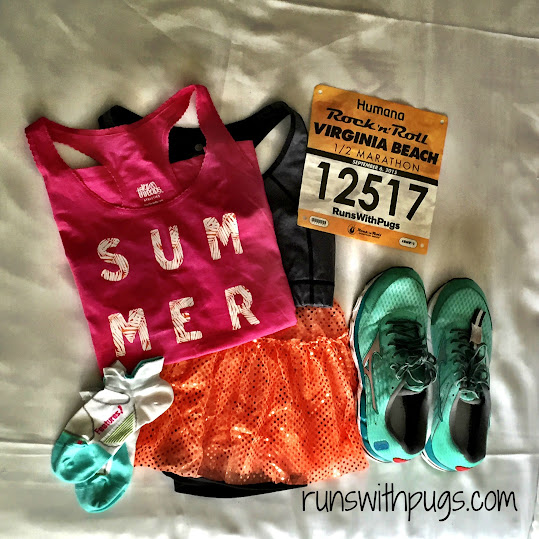 In the morning, we would run our very first Rock ‘n’ Roll event!

Are you excited to try out new race events or companies?