Pink Up The Pace is a local organization, founded by breast cancer survivors to help raise funding for early detection of breast cancer in men and women. In October, the group hosts a rather large and awesome 5K in downtown St. Augustine.

Last year, I missed out on the event because I was registered for the Marine Corps Half Marathon in Jacksonville. The races fall on the same date, but this year, I opted to stay closer to home and be part of this cause. Additionally, the two women I run with twice a week, as well as some other friends, would be running, and so I wanted to join in with them.

The expo and packet pickup took place on Friday, October 2. Expo hours were from 4:00 – 7:00, I believe, which didn’t work with my schedule, so I had to get my packet on Saturday morning. I always like to have my bib number in advance, but sometimes, it doesn’t work out that way.

My pre-race meal wasn’t ideal (hot dog, chips and a mini-cupcake at little man’s cornhole event at school), and I also had a very “special friend” show up that night, along with a nasty sinus headache. Needles to say, I wasn’t feeling awesome when the alarm buzzed in the morning, but none of that was a good enough excuse to stay in bed, considering the reason I would be running.

There was nothing to be done but get dressed and head downtown. I got a great parking spot in the garage, and since I slid in right before 7:00 AM, parking was free, which was a nice bonus. 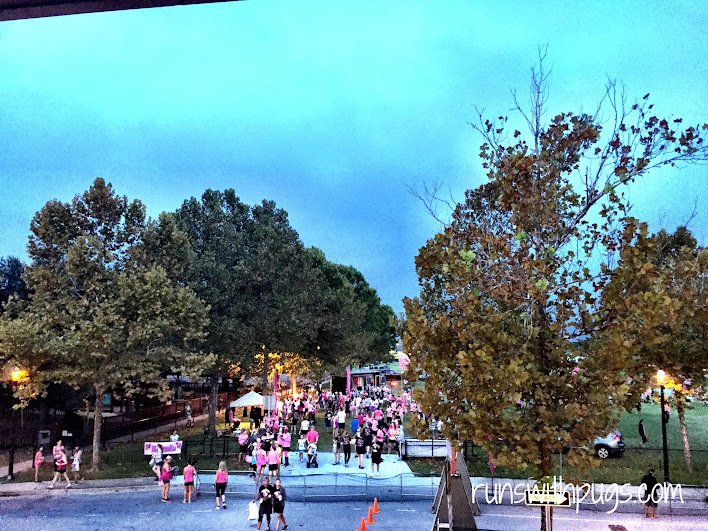 I picked up my bib and t-shirt, and ran into some of my friends. 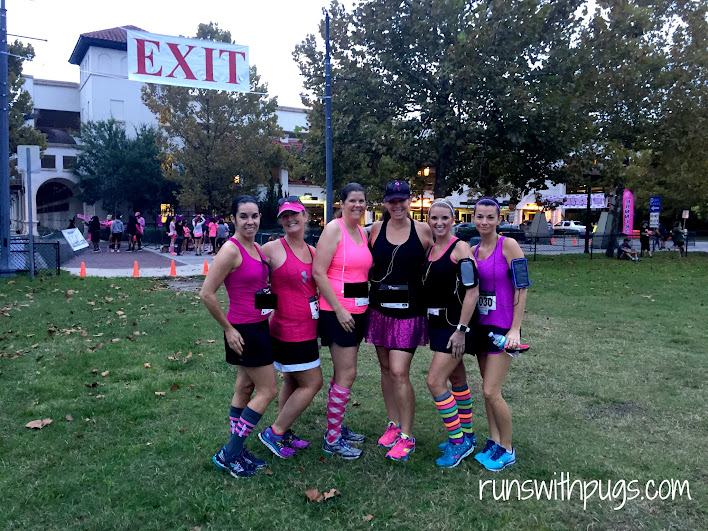 The race was a point-to-point: the start line was in front of the Visitor Center, while the finish line was between the parking garage and Francis Field. It was a little bit of a walk, but it felt nice to warm up in the chilly weather. I hooked up with my friend D. The plan was for me to pace her, but she had been getting really speedy in race scenarios and I wasn’t sure my legs were up to the challenge.

When we got to the start line, I was very honest with her: I would try to keep up, but she had a goal and needed to achieve it, with or without me. I think she was a little surprised, but I reiterated that she could very easily make the time she wanted, and I wanted her to get it. With that cleared up, we took a moment for the National Anthem and waited for the official start.

From the get go, my legs felt like lead. I kept up with D for maybe the first 3/4 of a mile, but adrenaline sent her speeding off. I was really happy for her because I knew she was going to have an awesome race, but I was pissed at myself for not being able to snap my body into shape. The weather was perfect, there was so much awesomeness around me, and I felt almost like I was squandering an opportunity.

The course was lovely. We looped along the waterfront, past the armory and into Lincolnville. The pavement, on the other hand, was wearing havoc on my feet and ankles. I started wondering if I needed new shoes, or if it was just the uneven terrain and old streets that were doing me in. I stopped paying attention to that, and started focusing on all the spectators and racers.

There was so much positive energy: so many people out for a beautiful run, celebrating life and strength and love. There were pirates in full costume, conquistadors with pink helmets and armor, guitarists, cheerleaders and  all sorts of residents lining the streets. Signs, songs and high fives were in ready supply.

The last half mile or so took us down St. George Street, which was full of cheering spectators, and then up and around to the parking garage.

I crossed the finish line and rejoined some of my friends.

D had gotten her PR, and I was so proud of her!

I couldn’t stay to wait for everyone because we had family pictures about 90 minutes later. I was sorry not to be able to cheer at the finish line, but this won’t be my last Pink Up the Pace by a long shot.

What are some of the touches that make little local races special to you?