Happy November! Another month has come and gone, and according to all the memes, we are about seven weeks away from Christmas.

This also means I have about four more weeks until Space Coast, and my training is going to be taking it up a notch.

Yes. It is terrifying.

Of course, I will do a race report for the Evergreen Pumpkin Run 10 Miler, but I will say it was a hard run. My legs felt like lead from the get-go, and even though I managed a six minute PR, I wasn’t really thrilled with my performance.

I didn’t have time to dwell on it, because I had things to do. After a quick bite to eat with my race buddy, I dropped her off at her car, and then showered and got ready to meet my parents and little man at a local fall festival. Where we “won” our new family member, Mr. Sammy (Basically, if you walked by the booth, you got a fish. Yay?) 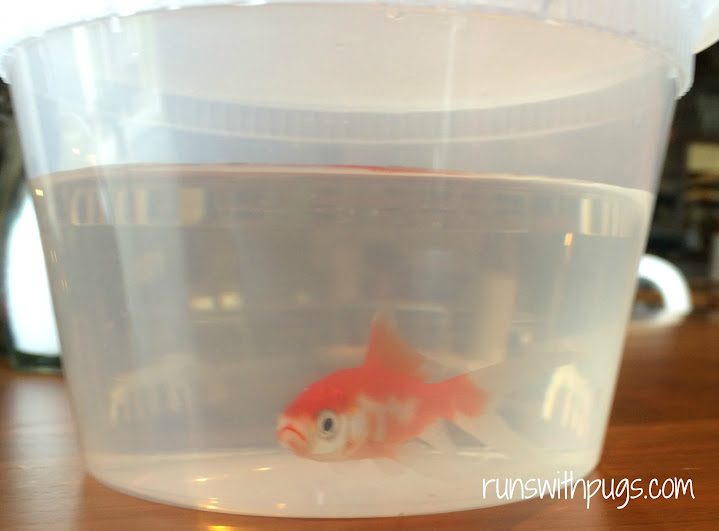 We got some BBQ for a late lunch, and then it was on to a pumpkin carving party. 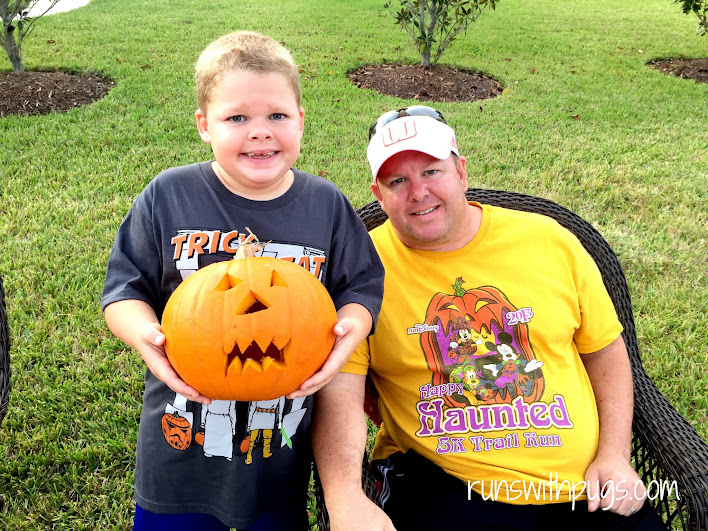 We had the best time and I loved that little man drew and carved his own pumpkin. Even if he did take it one step too far.

I was not a huge fan of this class. It was focused on body weight exercises, and man, those can be hard.

I was incredibly glad to be done, and move on to running my errands and getting on with my day.

I am coming to dread speedwork, especially when it comes in the form of bridge work. Yuck. Fortunately, I had my two group run buddies with me, and that made the miles pass a little more quickly.

Rest and I was glad for it. Our only big obligation was karate and then I made some really cute stuffed peppers, in an attempt to be festive.

Nothing is more intimidating than going out for a run with one’s coach. At the same time it  is also incredibly encouraging to have someone at your side, cheering you on. The run was hard. I was a little wheezy, from some kind of pollen and also from someone doing an early-morning controlled burn. However, I ran it at a pretty darn fast pace (for me), and was feeling pretty good by the end.

Which is great, because I needed the adrenaline to get me through the end of the day. After work, I had to get little man from the bus stop and then head back to work for an evening event. It was a lot of fun with a ton of people, but it was a much later night than I’m used to.

This was a body circuit class I loved: weights, weights and more weights. I like weights. A lot.

When I was finished and showered, I went to help out at little man’s Fall Centers. It was a lot of fun with Halloween bingo and cookie decorating. He has the best kids in his class and I adore his teacher.

After school, we had a playdate with one of this friends from class. She and her mom came over to hang out, and have pizza and s’mores on the fire pit. It was a really fun and relaxing night.

I was slated for eight miles, but…. To be honest, I had all that sinus-y gunk collecting and I was way more interested in getting a good night’s sleep than going out for a run. As much as I hated to procrastinate, I decided that I would go ahead and make sure I hydrated well throughout the day and go for the run on Sunday instead.

Our day was chock full of fun. I made breakfast.

Next up, a birthday party at Chuck E. Cheese. All the kids wore costumes, which made it extra cute, too.

When I got home with little man, Mr PugRunner reported that two of our pugs weren’t feeling too great, so he took little man to our second party, while I stayed home to play nurse. (We will be making a trip to the vet today, unfortunately). I was sorry to miss the fun, but cuddling the furbabies was the priority.

The boys spent a few hours at that party, then came home to trick or treat. Little man hooked up with some friends in the neighborhood and Mr PugRunner and I took turns walking around with them.

It was a wonderful night. And it was daylight savings time, so we actually got an extra hour of sleep, even though we stayed up pretty late! Yay!

According to my stats, I ran 76 miles in October, which is the most I’ve done in a long time. Maybe even since marathon training. Just goes to show you how hard my coaches have been working me. For the most part, I’m hanging in there. Some of those early wake-up calls have been brutal, but once I’m up and out, I do ok. The next four weeks are going to be a true test of will, and I hope that I have what it takes to finish strong on race day.

How was your week in training? How about your month of October?

How was your Halloween?