After little man’s triathlon, he was very clear that he was not interested in taking on another experience quite like that.

He did, however, say that he would like to do some more mile-long fun runs.

I was all on-board for that and immediately started looking at appropriate races for us.

Obviously, The Great Candy Run was the perfect choice.

With proceeds going to the Fetal Health Foundation, The Great Candy Run is a family-friendly, well-themed run with options for a 5K, a one mile fun run and a shorter, toddler-friendly distance. Costumes were encouraged, and there was promise of lots of candy and fun.

How could it be anything but?

I wanted to be really festive, and so I decided we would make our own, candy-themed shirts. Of course, my mind went immediately to Candy Crush. I was able to find a plain athletic shirts for each of us, and started making the famous candies out of felt. My mom was awesome enough to sew them all on for me, and I was able to use puffy paint to draw in the details. 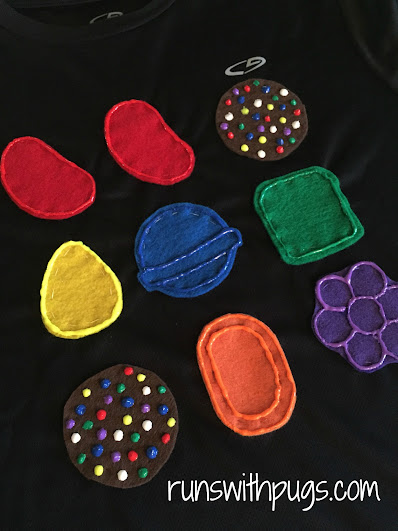 They turned out really cute and little man was so thrilled that he won’t let me take the felt pieces off to use the shirt for anything else. Fair enough.

There was no early packet pickup for either of the kids’ runs (just for the 5K), so I made sure we were at the venue (Hemming Plaza) on the earlier side to find parking and pick up little man’s bib. A race t-shirt wasn’t included in the price of registration, but we were able to buy one for an additional $10. They had a full range of child and adult sizes available. We had plenty of time to stash everything in the car, and get back to the race site.

The real bummer of the morning was the weather. There were so many adorable candy-themed details, but the mist and drizzle really put a damper on the festivities. We hung out with some friends under one of the vendor’s tents to stay dry before our turn to race, but it would have been nice to wander around and enjoy the sights and the sunrise a little more.

Things got started a little late, but soon, the younger kids went off for their dash. It was very quick (and cute), and after the start line cleared out from those finishers, it was our turn to line up.

The course was an out and back: we were to run a half mile down the street, turn around and run right back. The only obstacles were a fairly surprising hill (who knew there was a hill in downtown Jacksonville?), and the slippery streets. We got ready, set and off we went. 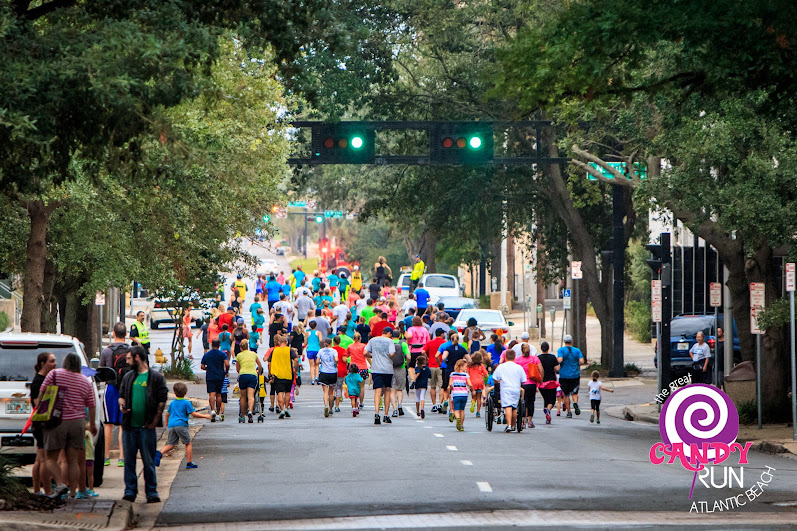 Of course, little man is still learning about pacing himself, so he was off like a rabbit. I followed at a little distance and caught up to him soon enough. We took turns trading the lead until we got to the halfway point, where volunteers were handing out cups of water and little cups of Skittles.

I did have to use the Skittles as bait at one point.

However, we crossed the finish line, to the applause and cheers of the 5Kers who were waiting for their turn to start. Little man collected his medal and empty candy box, and it was on to even more fun!

The “post-party” was outside (bounce houses, clowns, face painters, games, etc, in Hemming Park) and inside, at sponsor Sweet Pete’s. Since the weather was so iffy, we opted to just hit the candy store.

On the porch of the store were two setups: a photo booth with props

and a nice little candy bar for runners to fill their empty boxes.

Inside, we were welcome to explore and shop, but there were also some interactive stations for the kids. They could decorate their own chocolate covered pretzels.

Or they could watch candy makers boil sugar so that they could make lollipops or taffy.

It was such a fun morning, and we both loved shopping for some sweet treats to bring home. 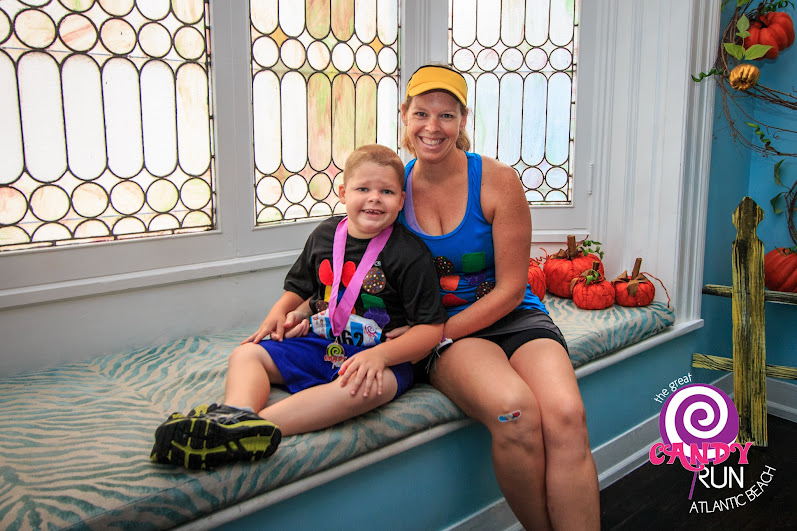 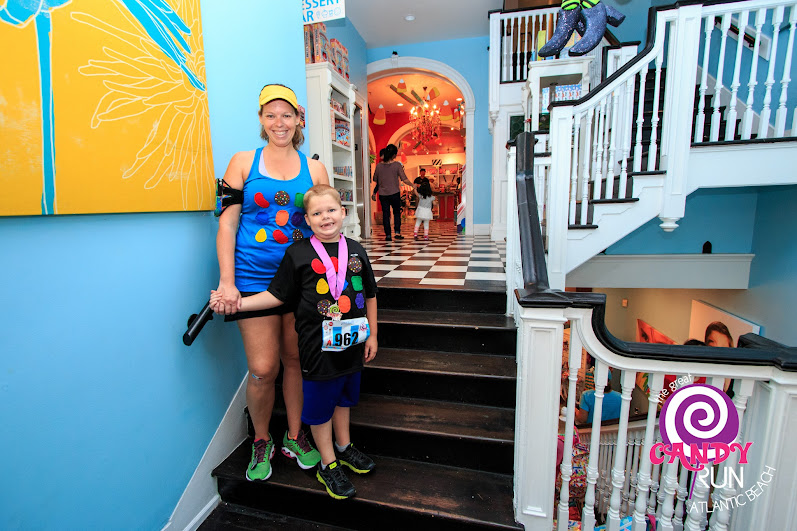 We headed out as the last finishers’ were crossing the line, and cheered them on as we made our way back to the car. Everyone looked like they were having a blast, which is a sure sign of a great race.

The Great Candy Run was a well-organized event with attention paid to every detail. While the race portion is obviously the most important part of a run, my event-planning self loves it when the whole experience is well-rounded and thought out.

What are some things that make a race feel like a more complete event?

What would be your favorite candy at a fuel station on a race course?