I confess. With training and the pugs being under the weather, and things going on for the holidays, I have been miserably behind in my blogging. I hate having to play catch up, but I have at least three race reports and some trip reports to share, and I hope to get that all finished in the next few weeks.

Much as I didn’t want to drag myself out of bed, I set the alarm and headed out for my scheduled 11 miles. Within the first half mile, it started drizzling. I am really not down with rain running, but I tried to stay tough. The drizzle gave way to a downpour, and even though I wanted to stick it out, the thunder started rumbling. I have to draw a line at thunder and lightning, so I called it quits, took a shower and got another hour of sleep. I was really disappointed in myself for not getting it done, but it wasn’t meant to be. My coaches said it was ok, but I needed to make it up the next weekend, which I resolved to do.

We met up with my in-laws for breakfast and said our goodbyes. It was sad to see them go, but they had to get back.

Mr PugRunner and his brother wanted to watch football, but before that, we all took little man to see The Peanuts Movie. It was surprisingly cute – a little longer than it needed to be, but sweet.

We had dinner out at one of our favorite Mexican restaurants, and said our goodbyes. My brother-in-law would be leaving first thing on Monday morning.

The workout was pretty tough – not only were the exercises difficult, but the humidity added another level of challenge.

I spent the rest of the day getting the house back on track after the weekend of visitors.

It was going to be a busy day. First, I had three miles of speedwork. I had a little bit of a break since I didn’t have to run the bridge. I hated every second of the intervals while I was doing them, but afterwards, I felt fantastic.

I got cleaned up, sent little man off to school and got myself to work. It turned into a pretty busy day, which made the time fly, and soon enough I was home. I couldn’t wait for little man to get home. I had packed our bags and we were going to be making the drive to Orlando for a night at the Royal Pacific and a day at the Universal Studios theme parks!

He had no idea the surprise that was waiting for him, and he was so excited when we pulled into the Royal Pacific.

We had dinner at CityWalk, and called it a night. I was exhausted from the drive and we had to be up early to take advantage of early park hours.

Little man and I had the best day! We got up early and spent the day riding and meeting characters and just having fun. We were very sorry to see it come to an end.

We managed to get home right in time for dinner, and then it was off to bed for all of us.

The weather had finally made a significant turn. It was in the low 60s, with heavy, heavy fog. I couldn’t see three feet in front of me while I was running. Yikes. But it was so nice to finally not be dripping sweat in the first few miles. I ran two at home and then went down to the bayfront to join my group for three.

I was able to snap a few pictures while I was in recovery from my strides. 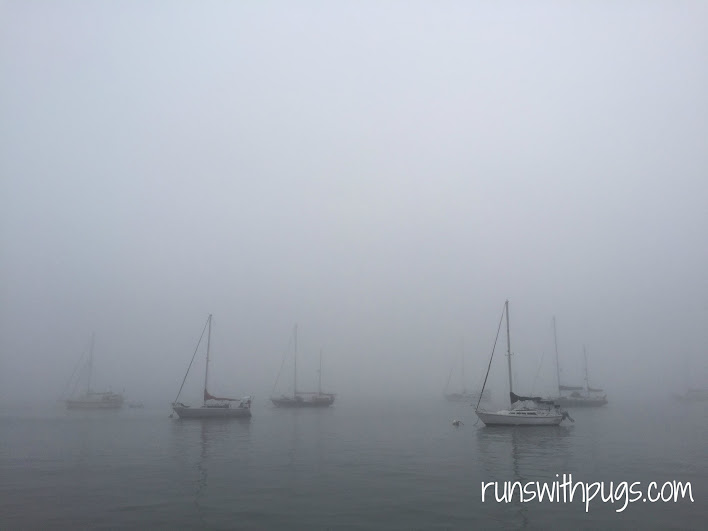 Mr PugRunner had plans with friends that evening, so little man and I had breakfast for dinner, made some popcorn and watched a movie. It was a really nice way to unwind.

Class was cancelled for the day, but I still had a meeting and had to pick up a birthday gift and some other things. Little man’s school carnival was that night, and we spent a few hours there so he could play games and have a chance at throwing pies at his teacher (who is such a good sport). Afterwards, we grabbed dinner at our favorite Italian place, so I could get in a little carb loading.

Earlier in the week, I started feeling anxious about this 11 miler, and decided that I was going to break it up: five miles really early in the morning, and then a 10K for the remaining six (point two). It was really the only way I could wrap my head around the distance.  I used to be great at solo running, but since I’ve been doing more and more with groups, it’s getting harder and harder for me to suck it up. I need to work on that a bit.

I played around a lot with the logistics and finally decided to run the five at home, shower and change, and then carpool with friends to the race. It was going to be too early for me to comfortably run alone near the race site, and I was pretty sure I wasn’t going to want to run a little bit before and a little bit after the race.

Of course, this meant that my alarm went off at 3:45 in the morning. I completed the first five in the pitch black and utter silence of way early morning,

and then headed out to do it all over again.

We spent some time at the post-race celebration and then got back.

I was able to eat, shower, and take a nap, and then I took little man to a bowling birthday party, while Mr PugRunner got the house ready to have some friends over for dessert and drinks.

It was a long, exhausting day, but I loved every minute of it.

So the week went well. I am hitting the paces that my coaches have assigned, and I am feeling mostly ok. With two weeks to go, my nerves are getting out of control, and I hope that I can keep it all in check on Space Coast day. I think if I can stay calm, the rest will all start to fall into place.

I am also looking ahead to what comes beyond Space Coast and into 2016. There are some great races on my calendar, and I am trying to make plans for my next goal. I find it’s good to keep my mind occupied with what’s to come – it makes the present challenges a little less prominent in my brain.

Do you ever run before you race in order to hit your scheduled miles?