Can you believe that we are in December and almost to the end of the year? It’s unreal.

Yesterday, I raced my last run of the year. I think. I’m pretty sure. Ok, there’s one more I want to run, but I don’t know if it’s going to fit into the schedule. I guess it can be a game time decision and we will see.

There is so much to say about this race, so many ups and downs, good moments and bad. Because that’s how races are. I finished and the end result was awesome, and I am now a Milky Way Challenge Finisher (I have run three of the five years of the Big Bang Series, and am on track to be a 5-Year Intergalactic Finisher). It’s a good feeling.

We arrived home around dinner time on Sunday and after a 3:15AM wake up call, bed never felt so good.

It was kind of a relief to know that I didn’t have anything on the schedule. At all. I mean, there was all the normal clean up entailed after a trip away, but that was it. And it was so very much needed.

Since I was still recovering, I skipped my normal Tuesday group run. It was a pleasure to sleep past 5:00 AM, and even 6:00. I could get used to this.

After I got little man to school, I had asked my parents if they wanted to join me for a little adventure. I have been looking forward to checking out a trail about 40 minutes from the house, but wanted to wait until after Space Coast, just in case I ended up tripping, falling or otherwise getting hurt.

I also thought it might be nice to stretch my legs on a little two miler.

We just don’t have things like this anywhere near where I live and run. It was nice to incorporate something new and focus on the beauty around me (and the potential of snakes), rather than pace and pavement.

My parents appreciated the walk and the views as well.

We hurried home for lunch and then it was back on a normal schedule with soccer and karate.

I skipped the group run again. It felt off not going, but I also had to appreciate that my plantar fasciitis was no longer flaring and a few more days of serious rest would probably get me close to right again.

I had thought about returning to body circuit today, but I figured one more day of nothing would be ok. I had been working really hard and recovery is honestly an important part of training.

Besides, I had a big day of volunteering at little man’s school: I had lunch with him, helped the class with their spelling tests and then got to read some great holiday stories for them (it was really sweet that the kids kept asking me to read more).

When little man got off the bus that afternoon, we got him changed and then headed up to Everbank Field. The Junior Jags were throwing their annual holiday party and we were ready to rock.

It was a cute celebration with lots of different craft stations and things to do.

Little man got to make a frame for his cheerleader photo 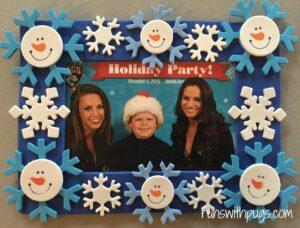 While we were waiting on line for his balloon animal, some of the Jags players came out and started to mingle, so I let him take my phone for a selfie with Tyson Alualu (Tyson helped).

We had a really nice evening together.

Afterwards, we joined Mr PugRunner at a neighbor’s ugly sweater party. We didn’t stay too late, but we had fun chatting and hanging out.

We registered little man for the one mile Gingerbread Man Dash Fun Run because it was later in the morning (9:00AM), but it turned out that his teacher was running in it, so we got there a little early so he could cheer her on. He also got to cheer on (and give medals to) another teacher, some classmates, and one of his karate instructors!

And then it was his turn. He did great!

After our late Friday night, we were all interested in doing nothing more than going home, getting back into pjs and watching movies, especially since the weather was so dreary and rainy. We had one more stop to make: the Health & Fitness Boutique so I could pick up my packet for the Divas Half Marathon & 5K St. Augustine. I don’t have any pictures, because it was so congested and crowded that I could barely get my bib and bag, let alone any great selfies.

(I did, however, get some info for the upcoming Daytona Half and 5K, in which little man took particular interest. We had a long talk about him trying a 5K again, and he said he wants to challenge himself, so we will revisit in the new year and see if he is still on board. I love that he wants to be involved in something that his dad and I love so much.)

We spent the rest of the day doing exactly nothing, which was just what the doctor ordered.

Do you have any more races or challenges before the end of the year?