You are here: Home / Uncategorized / savannah: a sneak peek

Disclaimer: I am an ambassador for the 2016 Publix Savannah Women’s Half. In conjunction with that position, I was compensated for this post with accommodations and admission to several local tourist attractions. All opinions are my own.

Last weekend, Mr PugRunner and I took a drive to Savannah for the weekend. Savannah is one of our favorite cities, great for walking, rich with history, and offering a culture proud of its heritage, arts and cuisine.  It’s been way too long since we have visited and I was glad to be back for this little sneak peek before the Publix Savannah’s Women’s Half Marathon.

After an uneventful drive, we checked into the the Hilton Savannah Desoto.

The hotel is situated in the heart of historic downtown, within very easy walking distance of Forsyth Park, Bay and River Streets and everything in between. Our 12th floor room afforded a gorgeous view of the city, and we were treated to the sight of bell towers for three different churches from our balcony.

It was also pretty cool to watch the fog roll in, completely obscuring the view, and then roll back out again.

We braved the cold to stretch our legs and get a late lunch. Savannah is great for walking and maybe even better for eating. On a recommendation from the front desk agent, we made our way to Treylor Park.

The Grilled Apple Pie Sandwich was one of the most delicious things I’ve ever put in my mouth.  We often make grilled cheese with cheddar and slices of Granny Smith apples, but I never thought to use cinnamon apples instead. I now know better.

We took our time going back to the room. There was no reason to rush through the multitude of little squares that make up the blocks of historic downtown, and I soaked in all the architectural details: gutters, doorknobs, gates and intricate grillwork.

At the end of our walk, we stopped in the Cathedral of St. John the Baptist to admire the vaulted ceilings and stained glass.

Since we were pretty full from our lunch, we decided to get a light dinner at the hotel and watch a movie before turning in. My plan was to run in the morning, as well as check out some of the houses and museums in the area.

Saturday morning dawned cold and gray, with the hint of sleet in the air. I was a bit daunted, but I mapped out a four mile route (I didn’t think I would last longer without warmer clothes), and set a time for Mr PugRunner to meet me for breakfast.

I took my time running the streets.

For one, there were so many things to see, and for another, the sidewalks were a little uneven and slippery. Not to many people were out in the early morning, but when I reached Forsyth Park, I was pleased to see that some small groups of runners were also braving the winter day.

I never really warmed up, but I didn’t care. Because the little spatter of rain drops gave way to something whiter and fluffier.

I was absolutely elated to get to run in the flurries, and practically skipped all the way to B. Matthews Eatery, where I promptly ordered a cup of coffee and watched the flakes drift down.

When I had cleaned up, we made our way to the Andrew Low House and joined up with a small tour. I love that some of the houses in this city have been so meticulously and painstakingly preserved and maintained, and we admired original furnishings and architectural details as a docent shared the history of the home and the people who lived there.

We also walked to City Market, an outdoor collections of shops and restaurants closer to the river. We checked out some of the storefronts, picking up some homemade candy and local wine, before getting pizza at Vinny Van Go Go’s.

By this point in the day, the wind had really started to pick up, so we took it inside. I spent a little time reading in front of the windows, which was a nice way to rest and still see the city.

That night was a late one. When we were through with dinner, we headed over to The Grey, where Mr PugRunner’s brother’s nephew is a chef.

He was pretty busy with the night rush, but they did get to say hello and chat for a minute, and then we just enjoyed the ambiance of the place with some wine and oysters.

I don’t usually stay out so late, but it was a great evening!

Check out came too soon. We decided we would pack the car, and then get breakfast and hit up the Ships of the Sea Maritime Museum. This was a double history whammy, because not only would we get to see all the ships, but they were on display in the William Scarborough House.

The morning passed with us examining different models and artifacts and speaking with some of the volunteers about some of the elements in the house, itself.

Too soon, it was time to go home.

April 2 cannot come soon enough. I will be back in town for the race, with my mom in tow. She has never visited Savannah and she can’t wait to see what I’ve been raving about.

It’s going to be an incredible experience to actually race 13.1 miles through these beautiful streets, past so many landmarks and gorgeous sights. And I’m also pretty excited to cross the finish line in Forsyth Park and collect one of these beauties: 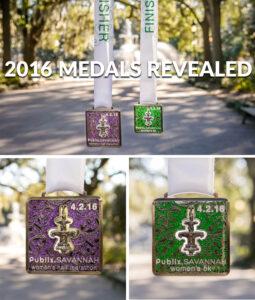 Will you be running through the streets of Savannah with me? There’s still time to register for a fun race weekend!

Have you ever visited Savannah?

What kinds of things catch your eye in your favorite cities?