Best Damn Race made it’s Jacksonville debut last year, exactly one day before I was committed to running my first (and probably last) marathon. I was so disappointed to not be a part of the inaugural event, although I did temper the emotion by registering for and running the virtual 10K. 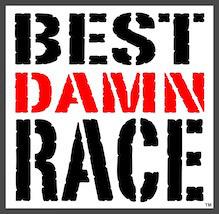 I loved the skyline medal. 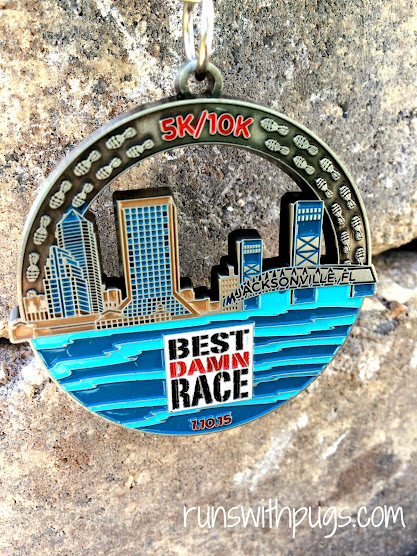 This year, I had no such ridiculous 26.2 plans, so I was all in for the BDR Jacksonville 10K. (The 10K has become my absolute favorite distance. The half is a great challenge, but the 10K is where I feel my strongest – they are so few and far between that I snap them up when I get the chance).

I carpooled/caravanned with a couple of friends and we got to the start line with plenty of time to spare. We parked in the open lots at Everbank Field and crossed to Metropolitan Park for the expo tents and start lines.

We met up with some of my fellow race ambassadors at the BDR tent, and spent some time checking out the lay of the land.

We were thrilled to see members of the 501st Legion on hand!

The weather was foggy and muggy and there was a pretty nasty chill in the air. I had started with a long sleeve shirt, but opted to ditch that at the tent and run in shorts and a tank. Due to the humidity, I didn’t regret the decision.

After a final restroom stop, we lined up for the start, and our group made decisions about how we would race. S and I planned to stick together for the duration, and fell into our groove pretty quickly.

I really enjoyed the course. 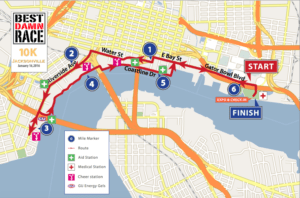 With the exception of the big onramp from Water Street onto Riverside Avenue, and that pesky pedestrian ramp to get back over the river, it was a pretty sweet loop: mostly flat and with some pretty and interesting scenery. The fog was incredible.

There were stretches where the runners ahead of us just seemed to disappear in the mist. I don’t believe I’ve ever run in fog so thick.

The water stops were fully stocked with water and energy drinks, and there was one stop towards the end with a nice selection of Gu. I wasn’t in the mood for water, but at one of the last hydration stops, the volunteers called out that they also had Nuun. I approached one of the volunteers, but it seemed that I had gone a couple of cups too far on the lineup: the Nuun was behind me. I shrugged it off. I wasn’t willing to go back and it wasn’t that important. I called thanks and continued on my way, and was flat out stunned when I heard someone yelling “Ma’am, I have your Nuun!”

That’s right. The volunteer had grabbed a cup and followed me down the block to make sure I got the liquid I wanted. I have never had that happen at any other race and I could not have been more impressed. They don’t call them the Best Damn Volunteers for nothing.

I was feeling pretty great coming into the home stretch until I glanced at my watch and realized that I was close to a PR. And that never ends well. I am going to dedicate a post to my race anxiety, but let’s just say it kicked in right on cue. I sent S on ahead – I needed a few seconds to get my breathing (and my nausea) under control.

Fortunately, those seconds didn’t cost me. I hit a PR by the skin of my teeth and was beyond overjoyed that I got to ring an actual PR bell! Such a great feeling!

The after party was in full swing, in spite of the weather!

I love how Best Damn Race has a little something for everyone.

We spent the rest of the morning watching the half marathoners cross the finish line and cheering people on. It was such a fun morning, and I’m so glad I got to spend it with some great friends.

This was way better than churning out 6.2 miles on my own and awarding myself a medal in my living room like I did with the virtual last year. I can’t wait for next year’s race!

And I can’t wait to add a version of this flamingo to my medal rack at Best Damn Race Orlando on March 5! 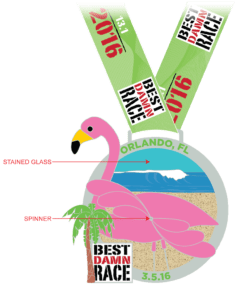 Maybe I’ll be able to chip away a little more at my 10K time!

(If you want your very own flamingo, you have til Friday, February 12, to take advantage of code RUNPUGS for a $5 discount on any available distance in Orlando!)

Have you ever had an exceptional experience with a race volunteer?

Do you have race anxiety?