I am an ambassador for the Publix Savannah Women’s Half Marathon & 5K. I have been compensated for my promotion of the event with a complimentary race entry and other event-related amenities. All opinions are my own.

I didn’t have a great night’s sleep. The howling wind and driving rain kept me up, and I was most definitely awake when my alarm went off at 6:00 AM. It was race day! 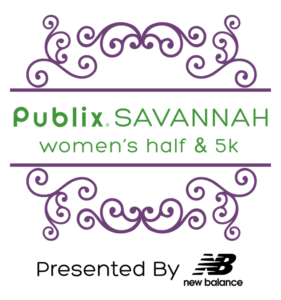 It didn’t take long to get myself together and make my way down to the lobby to meet fellow ambassador Anna-Marie, and Meghan.

The race had done a great job with communicating about the weather: there were several emails to let us know that the race would start at 7:30 AM as scheduled, with continued monitoring. As it was, there was a barely-there drizzle going on, so after a few pre-race snaps, we exited the Hilton Savannah Desoto.

We had about a four or five block walk to the start line in Forsyth Park. Plenty of other runners were also making the trek,and we arrived a little after 7:00 AM. For those driving in, there was plenty of street parking on the perimeter of the park and on the surrounding streets.

We had to navigate some saturated muddy patches in the park to get to gear check, and even though there were plenty of portapotties, I didn’t feel like I had enough time to make use of them before the race. There was, obviously, time for a pre-race snap.

I said goodbye to Meghan and Anna-Marie, and found Danielle.

We were planning to stick together for the half, but I was nervous. The streets were slick and I just wasn’t feeling strong or confident. I badly wanted to do this, but my head was all over the place.

Both the half marathon and 5K participants would start the race together, from the line on Drayton, alongside Forsyth Park. Runners were encouraged to seed themselves in informal corrals and there were pacers from 1:45 to 3:00 for the half marathon. Everyone would head down towards the river, and then start winding back up, around the historical squares. At about 2.4 miles, the 5Kers would break off and wrap into Forsyth Park, while the half marathoners would continue deeper into the city, before looping in for their chance to run by the beautiful fountain and across the finish line.

I was really enjoying the scenery: the beautiful houses and tree-lined streets. Savannah is such a unique city, and it’s great getting to race somewhere new, with new people and sights. But I was struggling early: the humidity, the bricks and the sharp turns around the historical squares was quickly wearing on me. Healthy, I would have been loving it. For some reason, I love turns and short streets on race courses – they help me compartmentalize the distances a little more. However, hurt was a different story. By 1.5 miles, my left hip was jangling every time I hit the ground.

To be honest, I didn’t know what to do. Part of me was very much “Suck it up, buttercup. You can go slow and even walk and you can finish.” The other part of me said “This is fine for three miles. It might even be fine for five or six miles. But what happens when your leg gives out at 10 miles?” I hated to leave Danielle, and I hated letting myself down. But I also wasn’t willing to do more damage that would set me back even further after the race was over.

We could see the turnoff for the 5K runners ahead: I said goodbye to Danielle and as she ran off, I burst into tears. I was so disappointed in myself and the circumstances. Another runner grabbed me in a huge hug and kept me moving. Her words were comforting: “It happens to everyone. This doesn’t define you. Take care of yourself and come back.” Truer words could not be spoken and I was able to collect myself enough to hobble-jog around the beautiful fountain to the finish line.

The finisher’s chute was very well organized. Volunteers handed out medals, and then reusable Publix grocery bags with a bottle of water, banana, orange and bag of mini muffins (The bags were a nice touch! I didn’t have to juggle any of my belongings – I was just able to pop everything into the bag until I was ready to go to gear check). There was a backdrop for photos, and then race results were posted a little further down the line.

I found Anna-Marie and Meghan, and they were good enough to help me to First Aid. I needed ice badly. The medical volunteers were great. They got me all situated and the jangling feeling started to ease.

Taped and wrapped, I was able to get my tears and my frustration under control.  It was time for a drink. Runners could choose from complimentary beer or mimosas, and Barefoot Wines was on hand for samples.

And then we sat back to wait for Danielle (and my mom, who was coming from the hotel). There was a nice steady stream of finishers: the field was just the right size to ensure there weren’t any major congestions or backlogs.

Local group, A Nickel Bag of Funk performed in the bandshell behind the fountain as the runners came in, drawing quite a nice crowd. They played twice: once after the 5K, and then later after the half. It was nice that runners from both groups were able to enjoy the music.

Danielle finished her second half in amazing time! I am so proud of her!

Before we left the park, I had to get a picture with my mom, too. She rushed right over from the hotel when I told her I had dropped my distance, and was happy to wait with the group until we were ready to leave.

It was late in the morning, and we were pretty hungry. Meghan recommended brunch at The Ordinary Pub, so we all showered up and walked over.

It was a bit of a wait, but it was worth it.

I have never had chicken and waffles quite like these, and they were just what the doctor ordered.

We had the rest of the day to enjoy, and so my mom and I took off to wander around a bit more. We checked out the Thomas Low House, the Colonial Park Cemetery, so many of historic squares, and lots of the architectural details that make Savannah the beautiful city it is.

We planned to celebrate our last night in the city with dinner at The Olde Pink House.

I knew my mom would get a kick out of the beautiful, historic house, and the food is always fabulous.

We couldn’t decide on what we wanted, so we ended up splitting some appetizers: Oysters Rockefeller, a fried green tomato salad, and the most phenomenal cheese platter. Our server split everything for us and served it in courses, which made the experience even more exceptional.

Despite my injury, it was a great day. I was, thus far, very impressed with the Publix Savannah Women’s Half Marathon & 5K weekend, and I am hopeful to be back next year for another go at the 13.1. I love women-specific races – they tend to be smaller and more intimate, with thoughtful swag (like quality tote bags) and great attention to detail, and this race was no exception.

Thank you to the city of Savannah and all the staff and volunteers, who helped make this day one to remember. But it wasn’t over! Stay tuned for my review of Sunday’s Yoga on the Square!

Have you ever had a race that didn’t go quite as you hoped?

What makes a race extra special to you?