Once upon a time, a little over a month ago, I ran a race…. 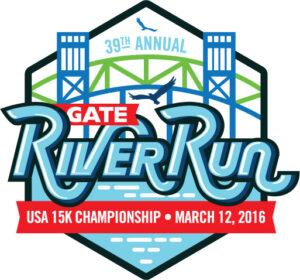 This was a serious game time decision for me. I knew that, technically, I wasn’t ready, and that I probably had no business being out there, but at the same time, I really hated to miss it. The Gate is, hands down, the premier race of the Jacksonville area, and it’s also walker friendly, so I figured what the hell?

My friend Emily had confessed to me that she hadn’t been doing a ton of training, so I asked her, no obligation, if she wanted a buddy for the 9.3 miles – I planned to do a lot of walking, and I said that if she was game for it, we could hang together on the course. Luckily for me, she was.

I was a little bitter on race morning. I wanted to be ready and able, but my body just wasn’t. I tried to tell myself it would be fun, and just to enjoy everything going on, so I tried to adjust my mindset. I wasn’t hugely successful.

The morning was cool and humid. Gate is always a later starting race (first runners depart at 8:30 AM), which can be tricky. When the weather is mild, it’s glorious. However, when it’s hot and sticky… some of those later stretches can be brutal.

I met up with one of my fellow St Augustine Moms Blog contributors, Brandie,

and my MRTT group (along with some visiting members of some other MRTT chapters). I can’t wait to start running with them regularly again.

I also met The Hart Bridge, in the flesh. Not so scary, for a Green Monster.

By that time, Emily was done with her Girls On The Run activities and was ready to meet. She had been seeded a wave behind me, but since I wasn’t going anywhere fast, I dropped back to her corral.

Which worked out great because there was Kristin

It was nice to see them, even though I wasn’t feeling incredibly sociable.

We all had different goals for the race, so after we crossed the start line, we went our separate ways. My hip was twingey from the start, so Emily and I settled into some semblance of a pace (limping for me) and set out for 9.3 miles through the city.

In a lot of ways, it was fun. Even though we were decidedly more towards the back of the pack, the bands were still performing en route and plenty of spectators were out. I was disappointed that I didn’t have it in me to run up (or down) the Main Street Bridge, but we were able to distract each other with conversation.

Towards Mile 7, Emily was starting to get a bit of a headache, so I offered her some of the Gatorade in my handheld, and insisted she take some jelly beans that were being handed out. The heat and the sun were pretty intense, so it was even more important to keep hydrated and maintain those electrolytes. I had an extra Gu that I was able to give to her, as well.

The Hart Bridge was a challenge, as always.

We ran a bit of it, and then took in the view.

We live in such a beautiful city.

There were a few runners who slipped and fell on the way down, so we were extra careful with our footing. I didn’t need any more injuries.

One of my favorite things about this year’s race was that the finish line moved. For the past two years, due to construction at the stadium, runners would have to cruise down the bridge, and then wrap a little way around the parking lot. This year, it was almost a straight shot to the finish line. Mentally, it was a nice change: had we both been in better form, it would have felt like flying.

As it was, I was pretty happy we had managed.

I wanted to get home, so we said goodbye and I jumped in the car. Though I hadn’t planned it, I had managed to park about 100 feet from the finish line. Fabulous.

As always, the volunteers and spectators were top-notch. We appreciate each and every one of you other there, helping get all of us through the miles.

It seems I’m in a habit of being injured one year for the Gate, then in great shape, then injured. So it looks like next year will be a redemption year for me. On the plus side, it will be the 40th anniversary of the race, which will make it extra special.

Here’s to next year!

Does your area have a premier race? What is it?

Do you ever go ahead with a race when you’re not up to par, just because it’s a great event?