It has been a long, long, LONG time since I’ve had the pleasure of writing a race report. I had planned on the Beson4 Corporate Run 5K as a  kind of pre-return: not quite a comeback 5K, but a warm up to the real thing. 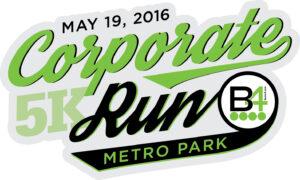 The Corporate Run is a fun way for companies to bring employees together to participate in physical activity. There are teams based on a variety of industries, with men’s, women’s and mixed divisions, as well as a CEO category. Teams are awarded points based on their top four runners, and category winners are then decided.

I don’t love that Corporate Run is a nighttime event.  I have never been a strong night runner, and after a day at work, I’m pretty generally spent. The weather forecast was also pretty ominous. The race had already been pushed back from 6:30 to 7:00 PM and if the lightning continued, there was a possibility it could be delayed even later, if not canceled altogether.

Tammy and I drove up to downtown together. It was nice to have a buddy for the ride. We were able to score free parking in the Everbank Field lot, directly across from the start line, so that was a huge plus. We found our team tent and got our singlets..

I love the color.

Since the weather looked like it was clearing, we headed over to the start line. I found a comfortable spot and started getting myself set.

As the National Anthem concluded, the heavens opened. Ugh ugh ugh. If I don’t like night running, I don’t like rainy running even more.

There was a group of young ladies lined up next to me. They checked the sky, exchanged glances, and then exited stage left. I really wanted to go with them, but I was committed to the next 3.1 miles, and tried to ignore the fact that I was getting soaked, and would have to do this thing with no music because I didn’t want to waterlog my iPod.

When we started, I was pretty annoyed to discover that I had screwed up when I set my watch for intervals – I wanted to try :60/:15 but somehow, I had pressed :60/:30. That was way too much walking for me, so I just went ahead and started ignoring the intervals, running by feel, rather than timer.

The rain continued through my first mile, and I was kind of pleased that I ran through most of that. Unfortunately, after that, things didn’t go quite so well. The course was crowded and puddle-filled, and I got stuck behind larger groups more than a few times. It reflected in my pace, and I wasn’t really thrilled with my finish.

That being said, it was a relief to know that I was able to get through a 5K without my hip dragging and without all the doubts and insecurity. It wasn’t a victory as far as time, but it did incredibly positive things for my mindset.

I made my way back to our tent to hang out. However, even though the rain had cleared up, the bad weather was still lingering.

We enjoyed a few post-race drinks and watched the clouds roll in.

It started raining again, and we finally decided it was time to head out. We were starving and we joined up with several other teammates for a late night dinner. It was a nice way to end the evening, even though we wound up being out way past my bedtime.

And so I guess it’s safe to say I’m back. I’m not particularly displeased with how the night progressed, and I’m looking forward to Monday’s 5K as a way to better gauge my progress (morning run with better weather). The one nice thing is that, since my injury, I’m not feeling the same self-imposed pressure I used to. Maybe because I’m starting to mix activities up a bit so running isn’t the central focus. It’s definitely not a bad thing.

Do you race better in the morning or evening? In torrential downpour or mild weather?

Has your outlook on running and racing ever shifted dramatically after an injury or a break?