Sorry to have kept you waiting for this race report: after so long without writing them, it’s been a little tough to get back into the swing of it. Without further ado, here’s the tale of my fourth Florida Striders Memorial Day 5K. 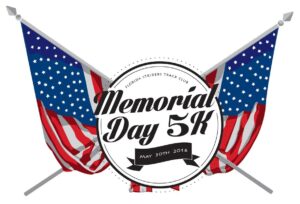 This race holds a special place in my heart. After all, it’s the first race I ever ran, and I’ve made it a point to come back each year. It’s been a great way for me to check my progress through the years.

I knew this year wasn’t going to be a PR, just because I am coming back from my injury. I also knew that it probably wasn’t even going to be a great race. I just wanted to get myself out there and back in the game. I have fallen out of the habit of racing, and the more I throw myself on the mercy of the course, the easier (and more familiar) it should get.

At least, that’s the way I plan on looking at it.

The original plan was for Mr PugRunner and little man to accompany me. However, little man was adjusting to summer vacation, and had spent the last few days in the pool and staying up incredibly late at night. As he should be doing. Mr PugRunner and I decided not to wake him up on this Monday. If he got up on his own, then Mr PugRunner would bring him to the race, 25 minutes away. If not, well, there would always be next year.

I hadn’t made any other particular plans to meet up with anyone, but some of my girlfriends were there, and I was thrilled to see them.

We all had our own goals for the morning, and that was just fine by me. I had plans to be alone in my head for this one.

While this race is never huge, the Striders boasted record attendance. It was wonderful to see.

It was beautiful seen so many people out in support of those who paid the ultimate sacrifice in service to our country.

After the National Anthem and a moment of silence, we were off. The 8:00 start time was rough. Even with all the tree shade in the surrounding neighborhoods, the heat and humidity was crushing. I was really only semi-prepared for it – I think my hydration was as good as I could get it, but I was sweating hard before I even hit the first mile mark.

Such is running in Florida.

I played a lot with my intervals. Since I didn’t have any lofty goals, I tried a combination of running for as long as I could and then strictly sticking to my :60/:15 run/walk time. It was nice to be able to catch a breather in the humidity with the walk breaks, but I was doing ok with the longer running, too.

Mentally, I just ticked off the distance. One foot in front of the other. I just wanted to be consistent and feel ok.

Really, it was all fine.

I was flat when I crossed the finish. One thing I have felt lacking in my runs in the ability to conserve enough energy for that final kick. As I am getting more consistent in my training, I plan to add in more strides to get it back. The lack of that sprint makes the ends of races much more anticlimactic for me, and I would really prefer a little more of that adrenaline rush.

I met back up with the girls for victory photos.

The bling this year was gorgeous: much larger and brighter than the three past races.

I was darn proud to have earned it.

Unfortunately, when I got back to my car, I was treated to the surprise of a dead battery. Womp womp. I despise car issues and was feeling pretty frustrated: Mr PugRunner was almost a half an hour away (they never made it out), and while my parents lived close to the race site, I hated to bother them. Papa Bear headed my way, but one of my coworkers came to the rescue by asking his friend to give me a jump. I was so relieved that I wasn’t going to have to get a tow, and was able to get the car home safely (spoiler alert: we got a new battery and all is well).

Once again, runners save the day.

I think it’s safe to say I’m finding my groove again. It’s going to be a process, and I’m not always incredibly patient, but I am doing my best to avoid any more injuries and still continue with the sport I love.

What’s something you love about the running community?

When you have a not-so-great race, are you able to find the positives in it, or do you write the whole thing off as a negative?