It’s time to welcome in September! August was pretty successful in a lot of ways. We’ll take a look at how I did as well as my September goals after the week’s training recap.

Errands, hanging out and family time. The best way to spend a Sunday, as far as I’m concerned. Well, minus the errands, because I don’t love those, but you get the idea.

This class was much more fun than the last one. I really enjoyed it and felt like it was a great workout.

It was a quiet Monday – little man did his homework and went to karate and we called it a day.

It was a lovely morning for a five miler. The humidity was high so I just went with the flow.

Afterwards, I tidied up and started prepping dinner. Mr PugRunner  was going to Ronald McDonald House to help with dinner for the residents and so my parents were going to join me and little man for spaghetti and meatballs. I made extra so Mr PugRunner could serve some to his buddy, who was coming over later for the Fantasy Football draft.

It was a fun night, and little man even got to practice selling his popcorn for Cub Scouts.

I screwed up my courage and went back to another spin class. This time, I was able to stand up in the saddle for a couple of the moves: not for very long, but I was starting to feel a little more stable and confident. I can’t believe how much I sweat in this class. I still think I hate it, but it feels so great to work that hard.

In the meantime, we were keeping a very close eye on Tropical Storm Hermine, which was working it’s way towards the west coast of Florida, gaining and strength and threatening the coast. We’ve had a pretty inactive season, so it was worth considering.

Little man had a bad dream, and asked me not to run so I could snuggle with him, so I did. I hate when he gets scared, so it was the least I could do.

After he went to school, I decided to do another turn at spin. This class was even better than the day before, and I did even more standing. Yay me! I actually really like the climbing, with the tension cranked all the way up. Of course, I was dripping by the end, but I decided to try out Body Recon, which was next on the schedule. My friend assured me I would enjoy it.

The class seems to be a continuous stream of 60 second exercises. We did cardio, weights, kettle bells, and abs. I guess the premise is that you can do anything for 60 seconds. It moved very quickly, and I liked the constant change up of things.

I showered and went out for sushi with Mr PugRunner.

We were waiting to hear if the county was going to close school the next day – surrounding counties were doing so because of the threat of winds and tornadoes. We did some last minute food shopping, just in case, and were actually pretty relieved to get the text that little man would have a four day weekend.

Little man was nervous when he got off the bus. Of course, rumors were flying and he was a little scared about what might come. We did our best to reassure him that we were safe and tried to make it a fun night. He played with all the other kids on the street, and then we settled in with a movie and late bedtime.

Mr PugRunner decided to sleep downstairs with the TV on, just in case, so little man slept in our room. I stayed up late enough to catch the 11:00 PM storm update, and then it was time to hunker down.

It was kind of a dull day. We watched a lot of weather reports and lounged around. There was one tornado warning in the early afternoon. Little man wanted nothing to do with it.

Finally, the rain clouds moved on and we were able to get outside for a little bit. We took the pugs for a walk, and let Molly ride in the wagon so she could get some fresh air, too.

I wasn’t up for a long run, so I did five miles again. It actually felt really good.

The rest of the day was pretty busy. We went to the mall to pick up some new Miami Hurricanes gear for the new season, and got build-your-own salads from a place in the food court.

I love chopped salads, especially with lots of yummy stuff.

We had a BBQ at a friend’s house and then Mr PugRunner had a buddy over for the first Hurricanes game. The Canes dominated the Rattlers 70-3! 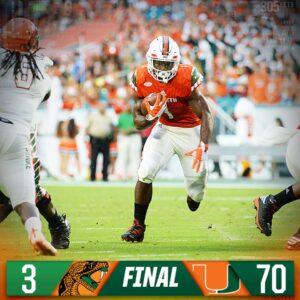 The season is off to a great start!

Ok, so let’s check out how August’s goals went.

1. Continue with increased mileage – After a very slow start this year, I ended August with 89 miles. I probably should have gone for 90 for OCD purposes, but I didn’t. The bump from three to five miles for my regular training runs has been pretty effective, as far as boosting my strength and my confidence.

2. Yoga, yoga and more yoga – Ehhhh….. So there wasn’t a ton of yoga in August. It just didn’t fit into my schedule. However, that doesn’t mean I let the cross training go by the wayside. I have been dedicated with my body circuit, and added in some spin and other workouts.

3. Secure coaching for goal race and establish goals – I have my questionnaire and just need to get it filled out and submitted. That will happen this week.

4. Register for another 5K – Check! I registered for and ran the Jaguars 5K Stadium Challenge (and Fun Run).

It was fun, and it was good to get out there again.

5. Get back to running with Mr PugRunner – Mission accomplished. Mr. PugRunner got his new shoes and has been out a couple of times. He doesn’t have a goal in mind yet, but it’s good to see him out there.

Overall, I think I did pretty well. So what’s next?

I haven’t visited Philly since an elementary school field trip! I’m staying with a great running friend! I’m going to meet some of my fellow Rock ‘n’ Bloggers! I’m trained for the distance! My hip hasn’t been giving me any trouble! These are all good things, and there’s no reason not to just enjoy the experience.

2. Hydrate more/cut back on my Diet Dr Pepper habit.

I had been doing REALLY well with my balance on this. My soda intake had been way down and my water consumption was way up. Somehow, along the way, I’ve gotten lazy about that. I’m sure that it is making a negative difference in my performance, so I’m going to crack down.

I do need to be more careful about my sugar intake. I don’t want to be too restrictive, but I can certainly make some healthier choices and increase my protein. Time to get on board with that.

I have really been enjoying mixing things up in the cross training arena. I know I haven’t been on my road bike in a while (the weather hasn’t been optimal for it), but I think I’ve been making it up in other ways. It can only make me better, so I’m just going to keep it up.

It’s always fun to try something new, and it’s time I broaden my horizons a little. Stay tuned – this month I’ll be trying a new activity for the first time and I can’t wait to share it with you!