With that said, it’s time for the Weekly Wrap with HoHo Runs and MissSippi Piddlin!

The Evergreen Pumpkin Run has quickly become one of my favorites. It’s a great distance for a training run and the ambiance of the historical cemetery is unique and beautiful. Recap to come, of course, but this was how I spent Sunday morning.

For the afternoon, Mr PugRunner had planned a culdesac party to hang out with some of our neighbors. We had a great turn out and all the kids spent hours playing an having fun. I was exhausted, but I was so glad it happened. The trick is going to be remembering to do it more.

Happy Halloween! Technically, I was supposed to run 12 miles on Sunday, so I hustled to make up the two that I missed.

The fog made it super creepy, so I guess it was a perfect Halloween run.

I also made little man spiderweb pancakes before school. He was absolutely tickled.

The rest of the day was dedicated to getting everything ready for trick-or-treating. We were planning to have friends over for a themed dinner, and then let the kids go get their candy.

It was a blast. Mr PugRunner and I took turns escorting “Star Lord” and my favorite part was probably the family who was handing out Jell-o shots from a cooler in the wagon they pulled with them.

Since Monday night was pretty late, I decided to skip my run in favor of body circuit. It was the right call.

But on Wednesday, I was right back at it. Four 1600m repeats with a warm up and cool down. Blergh. I didn’t want to do it. I didn’t feel great and it was hot. But I talked myself into a short run. Then since I was out there, I figured I could at least do five miles. But if I was doing five miles, then I could maybe manage to do the repeats. And so it happened.

K and I hit the road early for an easy four. I am having a blast running with her, and I’m kind of thinking I may join her for her first big race in February. We shall see.

Best Damn Race published one of my pieces on fueling before a big race. Check it out here, and remember, the code RUNPUGS saves you $5 on any Best Damn Race in any city, including New Orleans! 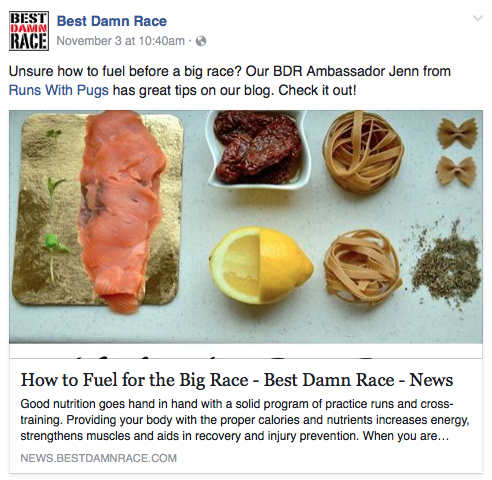 After that, it was off to work, and then home again to finish packing for Savannah.

Mr PugRunner and I celebrated our 10th anniversary with breakfast. We are going away together in a few weeks, so we kept the celebration very low-key.

I made sure my bags were ready, before we headed over to little man’s school for his honor roll assembly. We are so proud of all the hard work he has been doing.

When we got home, Meghan was waiting for me. She had driven up from her house and we were going to carpool the rest of the way to Savannah for the Rock ‘n’ Roll Savannah Marathon & Half Marathon Weekend!

Thanks to some traffic, we arrived at our destination around 5:00 PM. Kind of annoying, but the expo wasn’t too crowded and we were able to pick up our packets for all three races we would he running that weekend.

Full recap of the whole weekend is coming up, but we got our things, did a little shopping, said hello to some friends, got dinner and checked into our hotel. All we wanted to do was get some sleep.

Morning came far too early, but we were ready for it. I promise, I will share all about the big day: the weather, the VIP Experience, the friends, the course… It’s coming!

But in the meantime, know that I had the best time and hope to be back next year.

While we were running our hearts out, little man and Mr PugRunner were off on a different adventure: an overnight campout at Kennedy Space Center.

Seriously. Is that not the coolest?

They got a tour of the facilities

met a real-live astronaut, visited Mission Control, and slept under a rocket ship.

I was a little jealous I missed out!

After the past seven days, I am quite ready for a nap. There are still two more races on the books for this year, so I can’t take a break yet, but I’m looking forward to a breather.

Are you coming to the end of your race season? What’s next for you?