For the most part, I love the Evergreen Pumpkin Run. 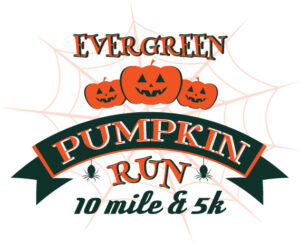 It’s a great size, on a fairley interesting course, and it’s the perfect distance for me to double up on a race (with bling!) and a training run. In that past few years, the race has sold out about a week prior, so it’s definitely one to register for way in advance.

Granted, for the last few years, it’s been ridiculously hot and humid, but there’s no controlling the weather, so we deal with it as best we can.

Steph and I drove to the race site together. Parking is limited (runners can park inside the cemetery, but have to stay until the end of the race or on the streets surrounding the cemetery), so carpooling is the preferred way to go.

Neither of us had picked up our packets, so after we found our spot, we figured we would grab those, return to the car to drop off the shirts and bags and then do our bathroom stop and get to the start line.

You know what they say about the best-laid plans.

While packet pick up was smooth and easy, we hit a snag with the port-a-potty lines. By the time the National Anthem started, we were still about 20 people back on line, and I just couldn’t take it anymore. Since the first 5K of the course loops back and passes the restrooms, and since this was just a training run, I told Steph I was just going to have to stop in three miles.

Due to the race being at maximum capacity, the director started us in two waves, a few minutes apart. Somehow, we got out with the first wave, but it didn’t really matter.

The first 5K loops through the pathways of the cemetery. At the end of that, the 5K runners break off and head to the finish line, while the 10 milers turn to leave the grounds. The paths are narrow (which is why the race has a strict cap) and uneven, but well shaded. There is one water stop between mile 1.5 and 2.

Our first three miles were basically a rush to get back to the starting area and the bathrooms. (This is becoming a habit at this race, and I think next year, I’m going to need to pick up my packet in advance so I don’t have to make the long trek back to the car and then hope to get into the restroom before race start.)

With the 5K runners gone, things thin out a bit. The next portion of the race is comprised of two out and backs: one is on a path that leads away from the cemetery, and the second is on the road alongside the cemetery. The first of the two is kind of dull. It starts with a water stop and then there are several intersections and train track crossings – the area is pretty industrial, so not much to see. It’s not shaded and this is where things usually start getting hot. Things improve on the second out and back, at least in the interest category. The road isn’t shaded, per se, but there are a lot of trees, and there is a glimpse of the faster runners making their way back through the cemetery paths.

The fog lifted and the heat and humidity started in, quite unapologetically. I felt ok, but drained quickly. The one thing that kept me going was that I *think* these two out and backs were reversed this year. I’m not 100% on that, but my brain seems to remember it differently in years past. Either way, since it was different and unexpected, it helped the miles pass. At some point, I needed an extra break, and Steph went on ahead. I was fine with that. It’s nice to have a buddy, but I was ok finishing on my own, too.

The race finishes on the cemetery paths, following the same course as the first three miles. It’s nice to be back in the shade, and also because it’s easy to tick off the last landmarks.

For some reason, this race always measures a little long. There are a lot of twists and turns, and some weaving, so I guess it adds up. It’s a bit rough to see that 10.00 tick by on the Garmin and know there is still more to go, but it’s no longer a surprise.

Even though the race has been handing out medals to the runners over the last three years, the course is lined with pumpkins for runners to take when they are finished. For some reason, I have never claimed one. I guess maybe I just don’t want to have another thing to carry back to the car. But it’s a nice touch, and the pumpkins are always pretty sizable and well shaped.

Per my coaches, I was supposed to go at this race slow and easy, and that’s exactly what I did. It was hard holding back and getting myself in the right mindset – in fact, I told Steph that I kind of just wanted to finish the 5K and then go run the rest of the miles on my own because I was getting all anxious and pressured. However, I figured that I was already out there so might as well suck it up.

It was a lot of fun running with Steph – I miss getting to see her.

I love that the medal glows in the dark.

I was pretty tired afterwards, and glad to get a shower and a meal. Plus, I got to wear my cute race shirt. The designs have been great.

Do you have a favorite fall race?

Do you ever race the 10 mile distance?