I was really, really looking forward to this day. After grocery shopping, I was on my own. Little man and Mr PugRunner went over to a friend’s house to get some help with their Pinewood Derby car and I was free to just veg. It was heavenly and so very needed.

It was a day off for little man, and I was really excited to see him when I got home. Even nicer was that he didn’t have any afternoon activities, so once I was home from work, we were able to hang out a bit.

The boys wanted to go for their training run so I asked to go with them. It was nice to get out of the house and get my legs moving.

Kait and I met for our morning run. The humidity was back in full force, but we slogged through it. There is really something to be said for the winter slump, even if it doesn’t technically feel like winter here.

But we still planked. Because friends who run together plank together. Or something like that.

Little man started running club at school. I was pretty shocked that he asked to do it, but he was very enthusiastic so I signed the permission form. Parents are allowed to join in the running, but I had a work call that afternoon, so was unable to attend the first session. I promised him that I would start attending – my Tuesday miles are going to increase exponentially. As is my ability to run any time other than first thing in the morning. Stay tuned for more on that.

Another quiet day. I wasn’t really feeling well, so I was glad that we didn’t have much on the agenda.

Due to scheduling, we had agreed to do our long run on Friday, so we kept Thursday’s miles on the lower side. It was a good run.

The rest of the day was not quite as fun. I had to help Mr PugRunner get one of the cars into the dealership for some recall work, and then take him back when it was finished. In between I did a little shopping for some running fuel and new clothes. Ok, that part was a little more fun.

The boys had Cub Scouts and got more info on an upcoming camping trip and the Pinewood Derby. I’m really looking forward to both.

Sometimes, that first long run after a break is kind of like ripping off a bandaid. I have been dreading and dreading these miles, but with a friend along for the ride, it was much more manageable. I still wasn’t feeling entirely great, but I didn’t regret the run one bit.

I really wanted to go to the movies, but I had been promising little man I would come to school for lunch and it was a good day for it. He was really happy I came (and brought him takeout), and we had a nice chat through his lunch period.

Proud mommy moment? Report cards were posted and not only did he make the honor roll (again), but he was selected by his class for the “respect” award. So proud of that boy.

Saturday morning proved to be quite the adventure: some of the contributors of the St. Augustine Moms Blog got to meet up at Aerial Athlete for a session on the silks.

It was so intimidating and so amazing all at once. I had to push really hard through a lot of my limitations (not letting go, being comfortable upside down, etc), and I really want to go back and push a little harder.

We had a much anticipated date night. Mr PugRunner had gotten me tickets for Book of Mormon for my birthday last year and it was finally time to go!

The show was phenomenal – irreverant and sharp, but so witty and clever, too. I was so glad we were able to finally see it!

In other news, the winner of the lovely Nourish soy candle is…. Sarah G.! 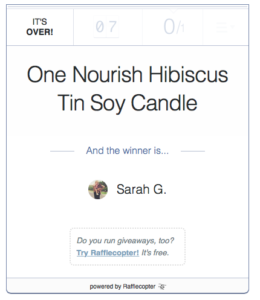 Congratulations, Sarah! We’ll connect to I can get that sent out to you!

What’s something new that challenged you recently?