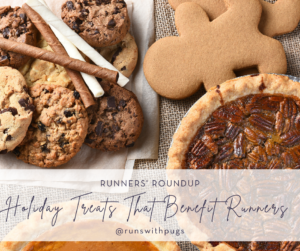 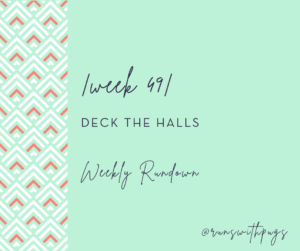 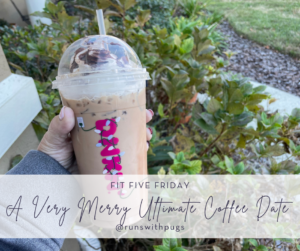 Sunday was an interesting day. After I braved the grocery store, I made this chocolate churro dessert (with Nutella dip), and we went to our friend’s house for some help finished up little man’s Pinewood Derby car.

It was a really lovely afternoon, but a nasty storm was brewing. We got home about 20 minutes ahead of a tornado warning, where we had to take shelter. Nothing materialized by us, but there were areas of Georgia that were absolutely devastated 🙁

Back to school, back to work, back to normal. I was really struggling with my motivation this week and it was very challenging to get myself going. I dragged through the day, got little man to karate (he is almost ready to test again!) and was pretty happy to get myself to bed.

The morning’s run with K was fabulous – in fact, it was so good that we lost track of time and went an extra mile. Oops. On the downside, we got a rather rude reminder: we have been rather lax about mixing things up. As we were making our way down our usual route, we saw a man hanging out near a closed store. He didn’t approach us, or even seem to notice us, but it made us realize that we needed to be more aware and less predictable. Just in case.

It was also a double run day – parents are welcome to join in at Run Club, and little man asked me if I would, so of course, I brought my running shoes to work and went to school right after my shift. It was tough running in the field, but I hung out with little man and some of his buddies and had a really nice time. He seemed to appreciate it.

Wednesday was an awful day. I was completely off all morning, my anxiety was in full gear, there were some situations that cropped up during the day that just threw me even more off kilter, and I couldn’t wait to get home and go out to a much anticipated girls’ night.

Unfortunately, Mr PugRunner has been working through some serious sinus issues and had his worst bout yet. He had finally started taking some meds, but he wasn’t in any shape to parent so I canceled my plans. I was able to watch a movie at home, but it wasn’t quite the same.

Having learned our lesson from Monday, K and I changed our route. I didn’t love it as much, but variety is the spice of life, or something like that. This run was less wonderful than Monday’s – we just couldn’t get in a groove. Our legs felt heavy and every step was a huge struggle. We got though it, but it wasn’t pretty.

I had to run some errands and check out a space for an upcoming party, but I really wanted to be home in my PJs.

The evening was a double whammy: little man’s school had a literacy night with dinner and a professional storyteller. We stayed for some of that and then scooted to his Cub Scouts meeting. I don’t often get to attend those meetings, and it was cool to watch him and his den-mates complete one of their Bear tasks.

Mr PugRunner and I met at little man’s school for his “Character Counts” award ceremony. Our school celebrates certain character traits throughout the year, and each class votes for one student who it feels best embodies those traits. Little man has earned a Character Counts award each year since Kindergarten, and this time, his classmates voted for him for “Respect.”

It was a great way for him to end his school week. We had a nice movie night, and I turned in early.

Much as I wanted to sleep in against the freezing temps, I was all in for the Wolfson Children’s Challenge Ultra Relay. I knew I wasn’t going to be able to stay all day, but I did want to be around for the team as long as I could.

Full recap to come, of course, but between my own 5K leg and some more running, I was able to score 9.1 miles. And I thought to myself that maybe running a 30K wouldn’t be so bad. Hmmmm.

It took a long time to warm up once I got home. Mr PugRunner cancelled date night in lieu of a trip to the doctor (finally) and so we did some more time on the couch.

Incredibly unimpressive week. I am a little frustrated with myself right now. I feel like I’m just not able to get all my training in, and it overwhelms me. I know it will all be ok, but I know that my body is missing yoga and circuit training and I need to find a way to make it work. Unfortunately, I am neither zen nor patient, so I have to focus on cutting myself some slack.

February – I’m coming for you!

Does winter get you down?