Guys, this week was SO much better. Of course, having hot water makes things so much more manageable, so my outlook was considerably improved.

Of course, I will post a full race recap at a later date, but this was absolutely amazing. I did NOT love the 10:30 AM start, but the weather was decent, so that helped.

After a delicious and well-deserved lunch, we went home for a quick nap before hitting the road again to attend a Superbowl party. I was a little worried that little man would be too worn out to enjoy himself but we all ended up having a blast and I’m glad we went.

It was a  pretty uneventful day, which was fine by me.

and then another two at Run Club with little man. Mr PugRunner showed up and surprised us, too, which was really nice. While it is definitely hot and sunny, the kids don’t complain much, so it’s easier to manage.

We went home, hoping for a chill evening.

As we were finally heading to bed, a nasty storm whipped up. The sound of it all hitting the house was pretty alarming, and Mr PugRunner decided to pull things under cover on the patio just in case. The power went out and somehow, I ended up falling sound asleep (probably just exhausted). The storm brought with it an EF1 tornado that touched down in a neighborhood about five miles from ours, causing major damage to several dozen homes.

It wasn’t a great day. Just one of those days where I thought I left one of the pugs out of his crate (he doesn’t respond well to that), forgot my lunch, was behind on errands and all that. Mr PugRunner helped me out by getting little man from the bus so I could take care of everything else.

I was glad to be done that night.

K bailed on our morning run and asked if we could do it later in the afternoon. I had been thinking about four miles this day and two miles on Friday just to shake things out, but figured four miles at night would have to suffice.

Instead, I went to yoga,

grabbed coffee with a friend and had lunch with Mr PugRunner.

After dinner, the boys went to cub scouts and I laced up. It was a really, really tough run. I just don’t enjoy nights, and my feet were hurting. Even with the wonderful company, the miles dragged.

First up? Little man’s Honor Roll Ceremony. He works hard in school, and he is always so proud of his accomplishments.

I gave him a kiss goodbye and drove to Jacksonville for the 26.2 with DONNA expo. I needed to collect the team packets and get them distributed to our runner. L met me there, so that was one down.

This is such a great expo, but I get so overwhelmed by all the vendors and booths. I ended up not buying anything, but I did sign one of the big posters on behalf of our team.

Saturday was a day of absolutely nothing. I did deal with a nasty fire ant infestation (victory was mine), while the boys went to get some supplies for an upcoming camping trip. We had a nice takeout dinner and watched a movie, and that was about that. I had to get a good night’s sleep for DONNA Day!

There are eight weeks until the Publix Savannah Women’s Half on April 8. I am confident in my base, and this week, I got in just over 16 miles, with an hour of cross-training. In the upcoming weeks, I’m going to be hitting it harder, and with more purpose. It’s going to mean some more early mornings, but I’m not afraid!

Will you be joining me there? Now, code PUGS will save you $15 on your registration to the half or 5K! 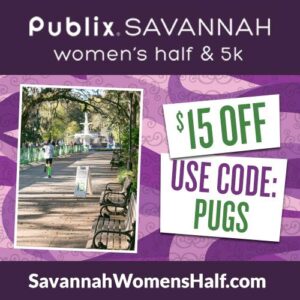 Do you ever have those days where nothing seems to go your way?