This is a sponsored post. March To Get Screened has provided me with complimentary entries to give away, as well as two for my own use, in exchange for promotion of the event. All opinions are my own.

On Sunday morning, we were able to take our time getting ready. The March To Get Screened 5K Run/Walk didn’t start until 9AM, and packet pickup began at 8AM. This was pretty late for a morning race, and it was a nice break. 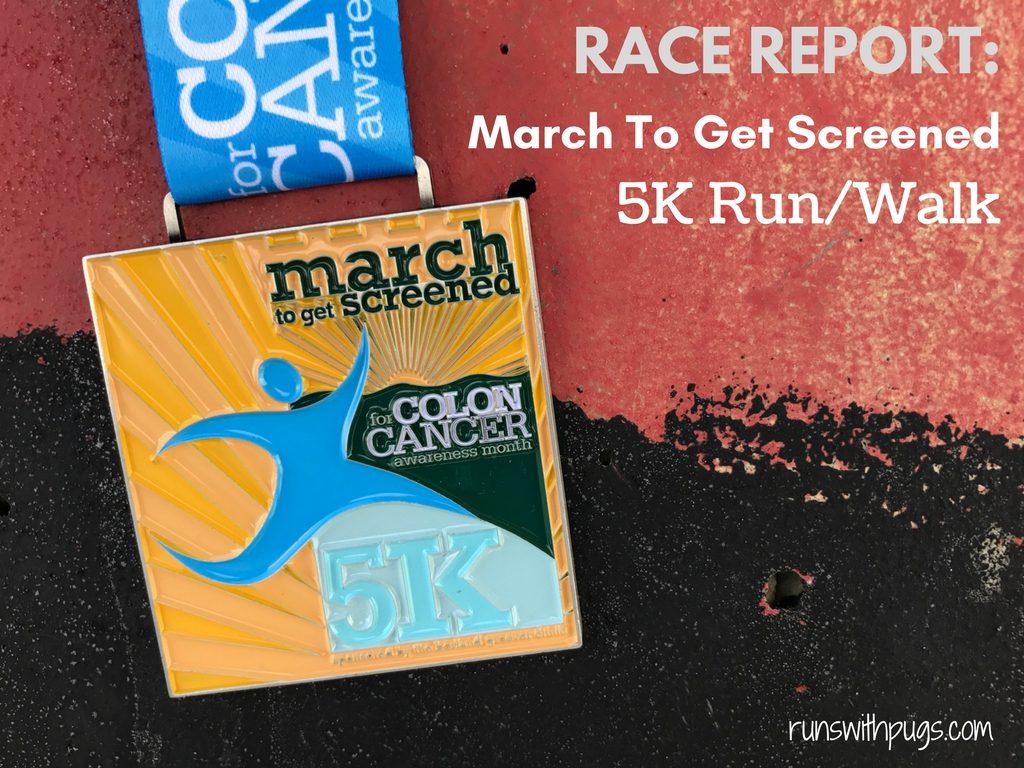 We found parking in a public lot right by the start line, and hopped out to grab our bibs. We also received string bags and soft cotton logo t-shirts. We stashed everything in the trunk and joined the crowd waiting to head to the beach.

There was plenty to do – volunteers were handing out blue beads, leis, sunglasses and tattoos. There was a face painter and balloon artist (little man obviously hopped into line for a balloon animal), and another vendor was handing out coffee, hot chocolate and chicken biscuits.

The area was full of people, alone and in teams, dressed in blue. There was a definite camaraderie in the air.

It was sunny but windy and cold. I was glad to have layered up, and even more glad that I remembered an ear warmer for little man.

After a visit with C, who I haven’t seen in AGES,

and a trip to the portapotty, we made our way to the sand.

The course had changed from the last time I had participated in the event. This time, we would head north, under the pier, passing the finish line along the way, continue for just over 1.5 miles, turn around and come back. The wind would be a factor on the return trip.

Prior to the start, a few trainers led everyone in a warmup session. After that, March to Get Screened Founder and colon cancer survivor Jan Pratt welcomed everyone and spoke a bit about the importance of annual screenings to help detect and prevent colon cancer. It’s such a critical message and just a simple exam can potentially save so many.

With that, we were off.

I wasn’t really sure of my strategy. My legs were tired from the two races on Saturday, but the weather was cool, so I shortened up my intervals and dug deep. Mr PugRunner and little man wanted to walk, so I left them to do just that.

The sand was packed and really flat, which helped a lot. I’m not usually a strong beach runner, but I did feel good, so I pushed. It was really a glorious morning, and before I knew it, I had made the u-turn and was heading back.

March To Get Screened is a very walker friendly event, and I passed a lot of teams in themed shirts as I was heading back. Among the humorous one-liners, there was one group whose shirts all read “Losing is NOT an option” and it gave me chills. I repeated that mantra in my head for the remainder of the course.

It was tough having the finish line in sight for a full 1.5 miles, but finally, I passed the 3-mile marker, cut through the churned up sand and finished.

There was more water at the finish line and finishers received a medal (last year was the first year of medals for this particular event). A nice throng remained on the beach to welcome back the rest of the field. I had a quick drink and then got back on the course to find the guys.

They had decided to start running a little, so I kept pace with them until they got to the finish line.

As always, the awards ceremony took place at Lynch’s Irish Pub, right across from the finish line. Runners could get a complimentary beer, listen to live music by Darren Corlew, and enjoy some delicious menu items. We didn’t join in the festivities this time, but the after-party is inevitably a great time.

To end on a really high note, March To Get Screened reported that this event helped raise over $50,000 for colon cancer research, education and awareness, surpassing 2016 by $10,000! That’s an amazing victory and those funds will be spent finding a way to end colon cancer once and for all.

Do you have a colon cancer awareness event in your area?

Do you run with other family members?