About a month ago, I talked myself into registering for my first sprint triathlon. I am still not entirely convinced it was a great idea (because I’m anxious like that), but, like it or not, it’s happening.

I am kind of excited to be trying something new.

I had a rough outline of how to train worked out in my head. Obviously, I had the running part down, and it was easy enough to add in cycling, but I planned to get in the pool over Spring Break. Our community has a pool with a span of 25 yards to swim laps. It’s not fancy but it serves its purpose. However, Spring Break roared in with high winds, lows in the 30s and highs in the 50s and 60s, so I took a hard pass on that.

In the meantime, I happened to see a Facebook ad for the Y Not Tri Indoor Tri at one of Jacksonville’s YMCAs. 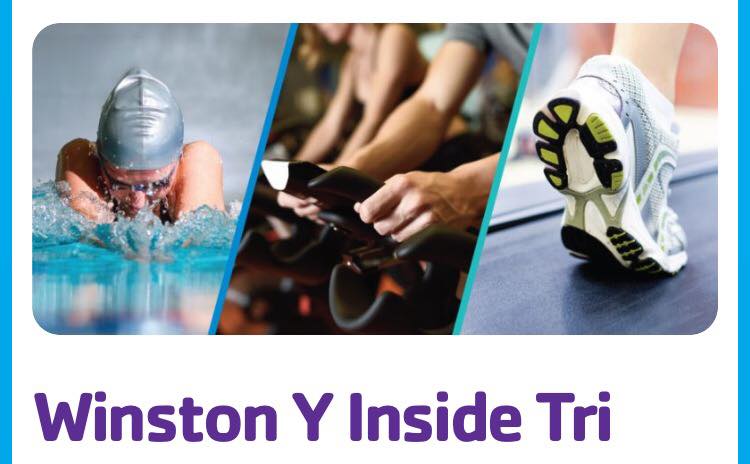 We are not members of a Y, but the event was open to everyone (non-members just had to pay a little extra). I mulled it over for a few days and then registered. I figured even it was indoors, it would be a great way to get a feel for switching from the pool to the bike to the road. 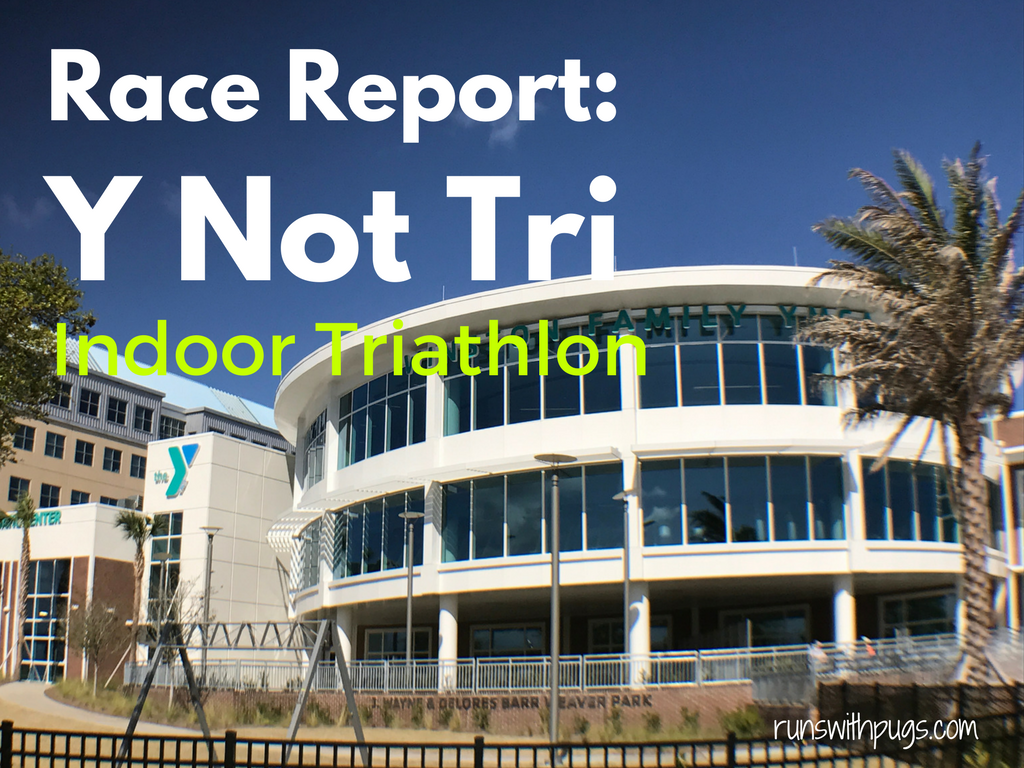 What’s an Indoor Tri, you ask? Well, it’s a multi-sport (swim/bike/run) event where participants execute the activities indoors, completing as much as they can within certain time parameters, rather than having to achieve specified distances. 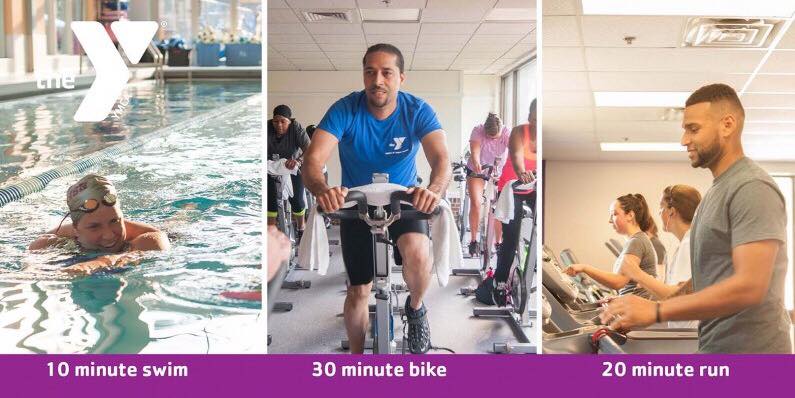 Basically, it sounded like a great introduction to the sport, and maybe make things a little less anxiety-inducing come April 23.

Athletes would report to the YMCA on Friday or Saturday to pick up their packets (including a bib and event shirt). We were free to look around the facility and acquaint ourselves with the location of the pool, bikes, treadmills and locker rooms, so that we would know where to go on Sunday. Our instruction email said that volunteers could help us write down our settings for the bike, but it was pretty busy when I was there, and I didn’t want to trouble anyone. It was always easy enough to set up my bike at spin class, so figured this shouldn’t be hard.

We were also emailed our wave times for Sunday (wave 1 started at 9:00 AM, wave 2 at 9:35 AM and wave 3 at 10:10 AM), and requested to show up about 30 minutes in advance to be marked, set up our transition area, and be ready to report to the pool five minutes prior to the wave start. I found myself in Wave 3. On the one hand, I am all about getting up and out for fitness related stuff, but on the other, I didn’t have to wake up too early, and could still arrive ahead of my wave in case I had any last minute questions.

I confess. I was really nervous. I kind of didn’t want to go by myself, but sometimes, you just have to put on your big girl pants and go for it.

I arrived at the Y in advance of the first wave, and had plenty of time to orient myself.

and one of the staff members escorted me to the locker room to show me how to operate the locks and where I could find the back entrance of the pool. I don’t think I’ve been in a locker room since high school, so it was a little disconcerting. K told me there were private rooms if I wasn’t comfortable changing in public, but I realized I probably wasn’t going to care that much in the moment.

She also took me up to the bikes and helped me figure out my settings. They were a little more complicated than what I have used, so I was grateful for that assistance. I noted all the numbers in my phone and hoped I would be able to make the adjustments when my ride time arrived.

After that, I returned to the lockers and set up my transition as best I could.

And then it was time to wait. I camped out on a window seat near the pool to watch some of the action. It was actually pretty calming to watch the two previous waves complete their swim. Finally, it was time for one last trip to the restroom, to put on my cap and goggles and head out to the pool.

I managed to get the end lane to myself – some people doubled up in their other lanes, but I was glad I didn’t have to worry about running into anyone. I was a little nervous – I hadn’t been in a pool in about a year, and although I know how to swim and consider myself reasonably decent at it, I’ve never been in an actual timed situation. There were several volunteers stationed at the end of the pool, keeping track of time, recording laps and calling out encouragement.

When the whistle sounded, I started pretty strong. Forgetting to actually start my Garmin in the process. Good job. I wasn’t particularly skilled at pacing myself or being too consistent, so I just did what felt good: I managed three good laps of nice freestyle, and then switched between breast stroke and freestyle for the remainder of the ten minutes. I didn’t ever have to stop or take an actual break, but I did get a little panicky at some of the chop from other lanes slapping at my face. On the plus side, I know to expect it now, which will keep me calmer during the real thing.

At the final whistle, everyone returned to the shallow end of the pool, got their official completed laps (I swam 8 laps plus about 1/4 more, but only the full lengths counted), and retreated to their respective locker rooms.

Ten minutes ended up being a lot of time. I used my towel as a bit of a shield, dried and changed my top (I brought a sports bra with an actual hook closure so I didn’t get stuck if I wasn’t completely dry), then my bottom. I was able to get my socks and shoes on, grab my phone, headphones, ArmPocket and water bottle of Nuun, and make it upstairs in plenty of time to choose a bike.

A volunteer made the appropriate adjustments for me, which was really nice. Everyone hopped on their bikes, the volunteers zeroed out everyone’s computers, and the bike segment began.

I felt pretty good going from the pool to the ride. It took a few minutes to kind of settle into a groove and find the tension that felt best, but I figured it out.

I confess, it was boring, just sitting in one place and staring ahead. Way different than being out on the road. People were very much in their zones, so it felt weird trying to start a conversation, although the volunteers were really helpful coming around and seeing how we were doing. One of them even picked up my phone for me after I dropped trying to change my music. That wouldn’t happen on the road, for sure!

I did notice that some people were mixing up their routines (increasing their tension and then peddling in a standing position or doing really crazy sprint intervals). Me? I just did my thing and worked to get in as many miles as possible.

Getting off that bike was somewhat unpleasant. Everything felt kind of tight and unresponsive. Boo.

Treadmills were located only a few feet away and I quickly selected one. For some reason, the five minutes passed really quickly. I (made a mistake and) didn’t bring a different pair of shoes for running: I had my Catalysts, which are great for cycling and for speedwork, so I assumed they would be ok for twenty minutes on the treadmill.

Once again, volunteers checked us and made sure our machines were zeroed out. I didn’t feel like I was ready when they said “go” but I certainly wasn’t going to waste any time.

Treadmill running isn’t my jam. In a crunch, I’ll endure it, but I would really rather not.

This was no different, and I had a hard time getting comfortable. Even one of the volunteers commented that I looked stressed.

We really had a beautiful view, so I tried to focus on my music and the river.

After a while, my right leg started to feel a bit achy. It has been bugging me rather regularly, but the treadmill was just exacerbating the feeling. My strategy was “slow and steady” and, since run/walk intervals are pretty complicated to manage on the treadmill, I ran all but one minute of the 20. Granted, it was nothing epic, but it was an accomplishment for me, nonetheless.

I felt really good when it was all done. I was incredibly pleased with my swim, happy with my run, and while my run wasn’t great on this day, I am confident enough that I can get it done.

This was a fantastic opportunity and the perfect way to get my feet wet (literally) in the sport of triathlon. I still have a little work to do in advance of the big day, but I think I have a pretty solid handle on everything.

My plan is continue to work on ride/run bricks throughout the week, and hit a few more targeted workouts in the pool. On no training at all, my swim felt good, so it shouldn’t take me too long to achieve a bit more strength and endurance. The swimsuit worked out great and while I hate the idea of being wet while I ride and run, that’s just part of the sport. I have to add a sports bra under the suit for a little extra support, but that won’t be a big deal.

Let’s keep our fingers crossed that all goes well.

Have you ever done an indoor triathlon?