This has taken a while to write. I was waiting for the professional race photos, which are trickling in slowly. I can always add photos later.

2017 was the 40th anniversary of the Gate River Run 15K. That’s fairly exciting when you think about it. I should have been more pumped to run it, but I was dragging mentally. The bulk of my ennui was how quickly plans kept changing. I was invited to the Girls On The Run Solemates shindig, which was really exciting, but then my host got the flu (I still got to go and had other friends there, but I hated that my host missed out). I had a friend who was going to run with me, but then she had to bail due to other commitments, so another friend wanted to join me, but then SHE got really sick, and I was back on my own.

There was nothing to be done about that, so let’s get to it!

I arrived at around 6:30 AM and got my assigned parking spot at the FJCT building where the Solemates event was being held. We had been advised to be parked by 7AM because that’s when the road closures would start, and with so many people trying to get into the area, traffic builds quickly.

It was still pretty chilly out, so I was grateful to be able to stay warm inside. There were real restrooms (with no line), and a great spread of bagels, bananas, fruit, coffee and water. I met up with my other friends who were there and we grabbed a table. My stomach was being cranky, so I definitely took advantage of the restroom more than once.

Being inside and away from the bulk of the runners made it hard to gauge the crowd mood and when it was time to start getting into the corrals. I think we left with sufficient time (the Solemates also provided private gear check, so we could just leave our stuff while we were running), and I was able to make one final portapotty stop.

The Gate River Run starts a little later – 8:30AM. This means that things heat up quickly. It’s all part of the experience, and I was prepared with a handheld of Gatorade.

I crossed the start line close to 8:45. At this point, my strategy was just to run and see how I felt. It’s so crowded in the beginning that popping in and out of intervals is difficult, and I made it all the way to the Main Street Bridge (Mile 1) before I needed my first walk break. My fourth Gate River Run was off to a positive start.

Things stayed pretty crowded all through the first bridge and into the San Marco area. I thought about how last year, I wasn’t able to run any of the Main Street Bridge because of my hip and felt extra motivated to push this year. My right glute was (and has been) annoyed with me, but I was able to work it out on my walk breaks. I felt pretty good, and although it was warm, the humidity didn’t seem as ridiculous as in the past.

This is the heart of the race. So many people are out in all the beautiful neighborhoods. They cheer, hold up signs and offer refreshments. There’s lots to see and with the live bands playing along the route, there is more than enough to keep one’s mind off the actual running.

I had Gu with me, but I was more than happy to accept a cold orange slice and a popsicle along the way – the sweetness of the fruit and the sugar of the popsicle were everything. In the past, I’ve snagged sausage and beer, but this time, I didn’t want to stop.

The end of this race is pretty brutal. There is a long stretch of highway leading to the Green Monster. And then it’s just the interminable climb to the top of the Hart Bridge. This year, the wind was, indeed a factor. After the summit, the last mile of the race is a winding downhill, which can be treacherous on tired legs and failing form.

I put my head down and focused on my music for the whole of Atlantic Boulevard. It seemed a little shorter this year, and soon I made the left and started the climb to the bridge.

My buddy Mike was out in a sombrero, cheering on all the runners on the ascent. I didn’t realize how tired I was until he started yelling my name and taking selfies (it’s what he does). He gave me a hug and asked if I needed water or Gatorade and I realized I just needed to be done. He told me to get over that bridge and sent me off.

At the start of the metal grating (again, treacherous for tired feet), a runner wiped out. It’s really hard watching people fall, either by tripping or from exhaustion – I got a thumbs up from her and kept going. 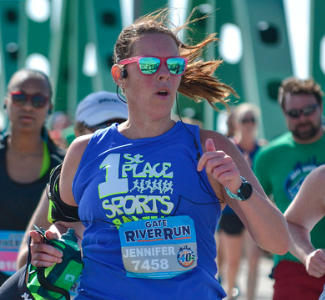 Finally, I reached the 1600m timing mat (there is a contest for fastest downhill mile). I was just about to open it up, when a runner saw the photographer a few yards ahead of me, cut across most of the course and attempted to get a pro photo of her leaping in the air. The whole thing seemed to happen in slow motion: she ran, launched herself…. and crashed flat on her face directly in front of me. I had to brake hard to keep from tripping and falling over her. I stopped to try to help, but she would not get up. Two women came back (maybe they were with her?) and created a road block so other runners wouldn’t trip. She finally sat up and seemed to be ok, short of some road rash, so I ran off.

My groove had been interrupted, but I got back in stride and finished pretty strong.

I met up with a girlfriend and we went to grab a free beer (the event is all you can drink) before heading back to the SoleMates event. We were both pretty happy with our performances.

We enjoyed the outdoor festivities for a little, but we were both starving, so we returned to the FJCT building to get some food. There were burgers with all the toppings, salads, chips and cupcakes. And drinks. Everything was delicious and it was nice to chill in the air conditioning and enjoy.

It wasn’t until I got home that afternoon that I realized I had, in fact, PR’d. Which was just huge and unexpected. I was fairly sure my PR days were over, but maybe there is still gas in the old tank.

I say it every year, but it bears repeating. The Gate River Run 15K is really one of the best races in Jacksonville. Not only is it an amazing running event, but it’s just a wonderful all around experience. The community and crowd support is second to none, the course is always a challenge, and the atmosphere is always incredible.

Even though I wasn’t feeling motivated at the start of the race, things worked out. I was sufficiently trained, and even though I was a little discouraged at having to run 9.3 miles alone, I found a good place in my head and ended up reaping the benefits with a personal best on this course. I didn’t stop for selfies or photos, passed on most of the treats being handed out and took advantage of feeling good. I hope more races can go this way in the future.

What’s the local race that stands out as representative of your running community?

Have you ever had someone in a photo-gone-wrong situation during a race?