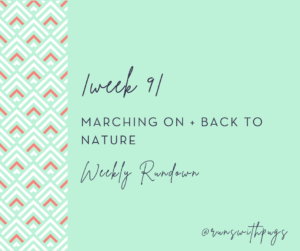 Things are starting to slow down on the running front. I have a few 5Ks on the calendar (including one on Thursday night), but no big plans on the immediate horizon.

Somehow, I managed to complete my first triathlon! I promise that race report is coming!

After the race, we were off to a friend’s pool party. It was really the perfect way to come down from my swim-bike-run adventure. We had some drinks and some delicious food and chilled in the pool and hot tub. Perfection.

Obviously, after Sunday’s endeavors, I was pretty well ready for a rest. I spent the day at work, and spent my evening writing and catching up on housework.

I broke this run into two parts: four miles with S, and then another 1.5 on my own at home. It’s been a decent system, even if I am getting up a little earlier.

After work, I met little man at school for tri club. This session called for bikes and helmets, and little man did great with his transitions and maneuvering. I’m excited to see him in action on race day.

Little man started volunteering to help out with the lower belts in karate, so he is doing back-to-back classes this night. I’m really proud of him for the hard work he is putting into his sport.

I also got a pretty sweet surprise in the mail: new Brooks Adrenalines in the new Rock ‘n’ Roll pattern! I love the electric guitars! They were a birthday gift from my parents, and I love them to the moon and back!

I opted for a solo run so that I could sleep in some. I also earned my Rock ‘n’ Roll Virtual Tracks MP3 Player medal (and also the challenge medal) AND got to do it in my new kicks! Yay, me!

The rest of the day was a whirlwind: shopping, cleaning, packing. Mr PugRunner and I had a nice lunch date and turned in early.

We were up at the crack of dawn to load the car. It was time for little man’s birthday celebration! This year, in lieu of a party, he asked to go to Disney. Since he is finished with testing and school is winding down, we opted to take four days and do it. Even more fun, a few of our friends are annual pass holders and decided to join us for part of the weekend.

Our first day was spent in Epcot, and little man was ready to take on tons of new rides.

We got pretty lucky with most of the lines, and had our Fast Passes all lined up to help with the rest.

He was so excited.

Towards the end of the day, we split up: Mr PugRunner took the bus with one of his buddies back to our hotel, while little man and I rode a few more attractions and then took the car over.

We checked into Port Orleans Riverside and really loved the property. It was our first time there, and we found it quaint, quiet and manageable in terms of size.

The evening was spent lounging around the pool and the food court. We were all exhausted but we somehow didn’t get in bed until much later than usual.

We had planned Animal Kingdom for the actual big day.

Little man said he was ready to take on Everest, and since the wait was short when we arrived, we popped right on!

After lunch and a birthday cupcake,

we did a few more rides and returned to the hotel for swimming and drinks. It was the perfect way to end an amazing day.

Due to the trip and the crazy amount of walking we did, I didn’t bother with a long run. The mornings were cool enough that it would have been nice to run on the hotel grounds, but it also would have worn me right out for the fun days ahead. I was ok with my decision.

Not having any large goals is both good and bad. It’s summer, so it’s definitely getting to be too hot for any serious mileage, but it also kind of messes with the motivation.

I confess, the next week will be slow-ish, just due to a few fun events going on. Also, the end of the school year is coming, and that will put a bit of a wrench into the schedule for a bit. However, I’ll be back in business, and mixing it up, after that.

What’s on your summer calendar?

I am not a doctor or medical professional, nor do I play one on the internet. This blog reflects my personal experiences on my own fitness and running journey, and the processes that work for me. Before you begin any exercise regiment, please consult your physician.
Stinging rain, cold wind, and just a whole lot of

The bad news: we got rained on!!! Booooooo! The g

Every month this year, I’ve been committing to s

Happy Monday! Headed to the bridge for some hill

Had some company for an easy walk today. Thanks to

❝Whatever you think you can do or believe you ca

Sometimes, you just have to remind yourself that y

Twinning with our @roadid and @dogid! Wearing thes

I struggled getting out the door this morning. I c