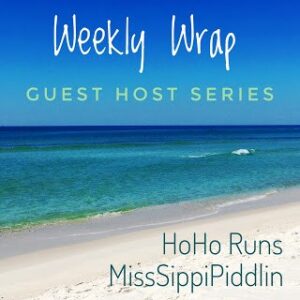 I am working really hard on ramping up my miles and building my base. The weather was also awful this week – I welcomed the rain because of our drought, but I am ready for it to even out now.

I am calling it a rest day, but for anyone who has ever spectated at or participated in a triathlon, you know it was anything but restful.

We had to be at the venue at 6:15 so that little man could put the rest of his gear in transition. He didn’t start until a little after 8:00 AM, so it was a lot of driving and waiting. Once he started, it turned into a lot of sprinting around for me and Mr PugRunner – we were able to watch him at the pool, walking his bike in and out of transition, the end of the bike course, and the entirety of his run.

He did so well and we are so proud.

When we got home, we honestly just wanted to chill but some buddies invited him to the pool for a bit, so of course, it was back in the water.

And then, I am fairly certain we just watched movies and chilled. It was a long day.

Little man and I headed out for our mile, and the rest of the day was pretty normal.

Mr PugRunner took little man to work and then to karate that evening. Little man has been consistently taking karate classes for the last four years and has been talking about needing a break for the summer. We don’t mind – we had opted to have him forego karate camp this year in favor of some other things he wanted to try, but we had asked him to discuss with his sensai before putting things on hold. In the course of that conversation, he was invited to test for his first advanced belt (!) so he will continue with his classes until this upcoming Saturday, test, and then resume classes when school starts. it’s amazing how far he’s come.

The weather had been awful – lots of rain and thunderstorms – so I ran close to home, just in case.

I made it through a very wet and drizzly five miles, and then got ready for work. I was not amused with the all day downpour, and was even less thrilled with the tornado warnings sounding my entire drive home. Fortunately, the storms headed out to sea without doing too much damage.

I went out to dinner with some of my neighbors – it was a lot of fun, and it’s something I hope we can do more.

Happy Global Running Day! I got the whole family out for a run! Whoo hoo!

After spending two days at his dad’s office while I was at work, little man finally got a play date with his bestie. I think he was happy to have someone to play with, as opposed to entertaining himself at work.

This was a yucky, rainy, miserable day. Boo. To be honest, I wasn’t really feeling too motivated to do much of anything, so we stayed in our PJs and lounged. These aren’t my favorite days, but sometimes, they are necessary.

Little man had been BEGGING me to make slime, and I had finally gathered all the ingredients. So we made glitter slime and smooth slime, and he was just the happiest kid on the face of the planet.

At long last, the weather was clear. I got a bit of a late start and the boys followed behind me on their bikes. They had almost caught up to me, when little man lost the pedal on his bike. I helped try to get it back on, but we couldn’t figure it out, and so they ended up having to walk their bikes home. We agreed to look at it over the weekend.

That afternoon, my parents came over and we ran a few quick errands before going to our historic downtown to hide our kindness rocks. We also found four rocks that others had painted and hidden!

We rehid those as well, and then celebrated our efforts with ice cream sandwiches from Piece Pie.

My parents also stayed for the Cub Scouts’ Raingutter Regatta. Basically, it’s a more casual version of the Pinewood Derby – scouts build catamarans out of balsa and precut sails and then race them in water-filled plastic rainwater, by blowing on the sails with plastic straws.

During their non-racing times, they took a water safety lesson, learned to play badminton and made fidget spinners out of hot glue, all of which will earn them badges and belt loops.

Little man went undefeated in every round, and won first place for the entire event! We couldn’t believe it! He was absolutely over the moon and is excited for his next summer activity.

Saturday – Run for the Pies 5K

We slept in a bit, and hung out around the house. After lunch, Mr PugRunner took little man to one of our local bike shops to get his pedals fixed, and I tried to take a nap.

That evening was Run For The Pies. It’s a crazy fast and popular 5K – the early race is for the male and female qualifying elites, and the later race is the open, where the first 200 people win a pie for crossing the finish line (if they do so under the time constraints). I had absolutely no chance of winning a pie, but I had never run this race, so I was ready to give it a try.

Race report to come, but it was a blast, despite the fact that it was at night and humid and muggy as all get out.

Almost 15 miles this week, so that felt really good. I want to get back on my bike, now that the rain has stopped. I’m really nervous about riding on slick, wet roads for some reason. Camps are starting up this week, so we shall see how my schedule works out as far as training. My next race is looking like the Celebration 5K on July 4, and I am excited to feel a little bit back in a 5K groove.

How was your training this week?

Is the slime craze a thing near you?