Well, it’s the last week of 4th grade for the special guy in my life, and so I am busy trying to wrap my head all around that. Crazy, right?

Obviously, there has been a lot of festivities and so much to do before the start of summer, but we are four days away from the end of all that! Whoo hoo! IN other news, it’s been a fairly good week of running and work outs, so at least I’m keeping on top of all that.

My mother’s day request was to run a race, which turned into me, Nana and little man getting a room on Jekyll Island. And me running a race.

The Turtle Crawl 10K was pretty freaking fabulous, and was just what I was looking forward to. Full recap to come, of course!

After the race, we had breakfast at our hotel. and did some more beach walking. Little man really wanted to find some sand dollars… and did we!

While we were wandering, a park ranger rode up to us. It’s turtle season, and she wanted to share the Diamondback Terrapin she had found and was taking back to the Turtle Center to be tagged and recorded before release. She was so informative about the turtle and its habits, and even let us all hold her! Day made!

Mr PugRunner and Papa Bear joined us for brunch, and we had a lovely day before driving home.

I was absolutely wiped out from the weekend, and was beyond grateful for a day off of pretty much everything.

My legs were so sore and so heavy, most likely from all the sand walking over the weekend. I was convinced that if I just started running, I would be able too hake it, but I stayed rather achy throughout the run.

I really wanted to go to the gym, but I was still sore and tired, so I begged off. It was going to be a long day.

First up, S and I had breakfast with the woman who will be taking my former position on the PTA. Then, S and I went shopping for all the fill-in items for the basket raffle our school was holding on Friday. It was literally a shopping marathon – I don’t think I’ve ever spent so much time in Target at once in my life.

After I got little man from school, it was time for a Scout Leadership Dinner. We got tons accomplished and we are all very excited for the upcoming year. We are lucky to have so many awesome people with so many great ideas.

In the meantime, Mr PugRunner and little man were at a dinner with Mark Richt, coach of the Miami Hurricanes. I’m not sure which one had the better time.

We did an easy 1 mile warmup, followed by 8x400m, with a cool down. I was fine not getting to that full four miles.

As soon as we got the kiddos from school, it was time to get to work packing and wrapping baskets. We had so many great donations, ad well as other fabulous thing she had picked up, and with everyone pitching in, we got so much accomplished.

The administration and teachers put together the nice breakfast for the volunteers and room moms. Our principal came in to thank everyone for all their hard work in the first year of the school, and we all sat and enjoyed a great meal. Afterwards, I went to snag a few last minute items for the night, helped S wrap the final things, and then went home to get ready for the evening.

Our final event of the year was a Time Capsule Ceremony, with food trucks and a basket raffle. It was a wonderful – we got to watch our Principal bury a time capsule to be opened in 20 years and people were buying tons of tickets for the raffle. We had things like pet baskets and beach baskets, but also tickets to Disney and Sea World, local attractions and even an XBOX! We had a blast with the family!

Little man ended up winning a basket with Gooder Sunglasses, a Garmin Forerunner 35 and three one-on-one training sessions with a personal trainer. You can guess what I got from that basket.

Oh. I also lost my first toenail. I kind of prided myself on never having lost one, but I guess all good things come to an end.

I wanted to get in some longer miles and S obliged me (even though it was her birthday!).

We finished up and I took little man to a group fitness class at Anytime Fitness, with other contributors and readers from the St. Augustine Moms Blog.

While the moms did box jumps and sandbag rows, the kids got to engage in a ninja skills class. They had a blast, and so did we.

But wait! That’s not all!

Little man also had a triathlon clinic for his upcoming event! We ran home, loaded up his bike and gear, and hit a drive thru for lunch. We arrived at the clinic right on time and little man got going. 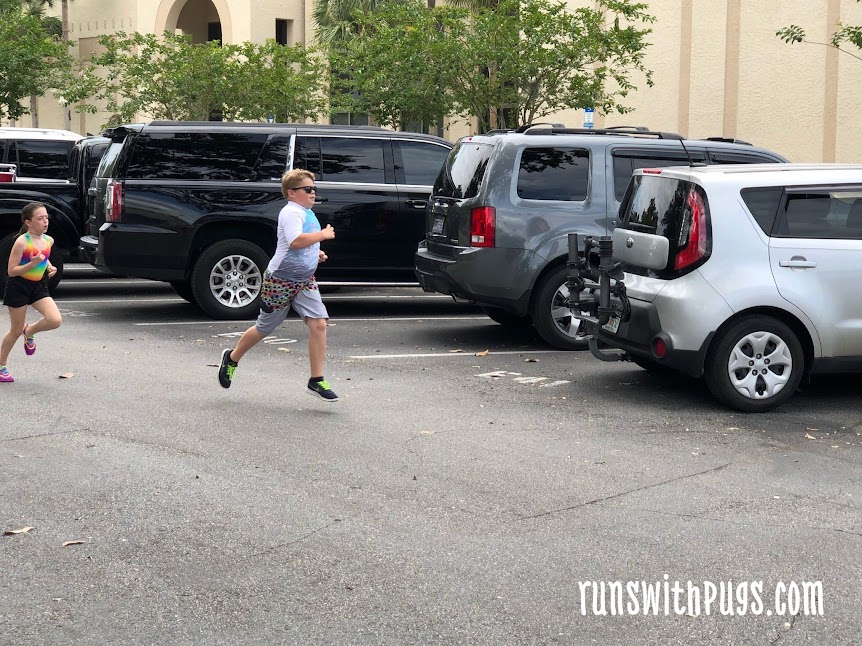 It was an intense workout – three hours split up practicing for the four disciplines of the triathlon. Little man was a trooper, swimming about 1200 yards, working on his transition, and getting tips on bike handling. He and his buddy did so great and we are stoked for race day!

While we were out, Mr PugRunner did some grilling and we had friends over for dinner. Little man and their son treated us to some optical illusions, tying water bottles to plastic cups with fishing line in order to look like they were making the cups float while they poured the water. It was so cool to have them do something so hands on, rather than just playing video games.

This week, we are going to gear up for a kick butt summer! On Memorial Day, S and I are registered for a local 5K, and I have my fingers crossed that the weather holds. It’s been raining every damn day for the last ten days, which is absolutely atypical for our area. Rainy season isn’t until June, and even then, it will only rain a little bit in the afternoon, not all day like this. The kids are on edge.

How do you do with your toenails?