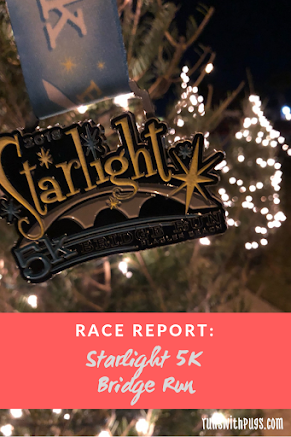 We weren’t initially going to register for this race. It was on a Saturday night and almost an hour away. The December race I wanted to do ended up being a little bit more inconvenient and in a not-so-great area, so I made a call on the fly and registered the whole family.

Another friend joined us for the evening, and we all drove down to the race site, being a bit generous on our time. We still had to pick up our packets and we weren’t sure about the parking situation (there was free street parking, but we had no idea how crowded it would be or how far we might have to walk).

We timed everything well and scored a spot a few blocks from the start line. The four of us were able to pin on our bibs, send the shirts and bags back to the car with Mr PugRunner and even get in trips to the portalet.

As the start time drew closer, the race director took a moment to share course directions. I had expected little man to stay with Mr PugRunner and G, but while we were waiting, he announced he was going to run this race on his own. I was unprepared for his decision, but tried to rally quickly to give him instructions (stay to the farthest side on the open portions of the course away from cars, don’t cut in front of people, be careful on the trail portions of the race). I hoped that if I could keep ahead of him and Mr PugRunner could stay behind him, we would have a fairly decent safety net.

He wasn’t changing his mind, so we lined up and waited for the gun.

The course left the small oceanfront park, crossed a block, went right then left for the first trip up the Flagler Bridge. It wasn’t as high or long as Vilano, but it was a bit of a workout. Little man had sprinted out well ahead of me, but I overtook him about half a mile in. We chatted a moment, and then he fall back. At the bottom of the bridge, there was a turnaround for the return trip.

Little man was just a few minutes behind me. I high fived him as we passed, and when I saw Mr PugRunner, I let him know that little man was still going strong and to keep an eye out.

I finished the rest of the bridge, and then navigated a little stairwell to the access road underneath. We ran away from the ocean for a bit, before turning left on to a packed dirt trail. It was definitely getting darker, the majority of the light provided by the setting sun.

The trail gave way to a wooden boardwalk that cut through the intercoastal wetlands. It was a little narrow and just slightly tricky to navigate, but the view was stunning. I really hope to visit the area again to enjoy a bit more of the beauty.

After all of that, we were back to the road. There were a few more twists and turns, and then it was right to the finish line, line with lit up mini Christmas trees.

The finisher’s chute was fairly narrow, so I wedged myself in to wait for little man and the rest of the crew.

He came in hot about 10 minutes behind me, and proudly collected his medal. Unfortunately, I couldn’t get a picture of him because people kept blocking the chute. There was no finish line photographer, either.

I texted Mr PugRunner to let him know that I had little man and then we wandered off to enjoy the after party.

Every bib had a ticket that could be submitted for a punch card, good for samples from local vendors and restaurants. Runners were entitled to a glass of sangria from Flagler Beachfront Winery, a donut from Swillerbees, s’mores kits, hot chocolate or coffee, and pulled pork sliders from Bayne’s BBQ & Southern Kitchen.

We were happy to chow down!

It was a beautiful, cold evening, with a huge and stunning full moon.

This is a definitely a do-again race. Little man loved it and asked if we could sign up for next year. I was really proud of him for pushing through on his own and I was thrilled that he seemed to enjoy it.

The shirts and medals were cute and nice quality (the medal glows in the dark), and I really loved how the course encompassed several different types of terrain, keeping things interesting.

My only complaint would be the lack of on-course photography. There were some fabulous opportunities on the bridge and boardwalk, and at the finish line, but maybe this is something that can be worked on in the years to come.

This will be a fun holiday tradition for our family going forward.

Do you ever get to run more than two different kinds of terrain in one race?