You are here: Home / Uncategorized / the other side of the finish line

Now that I’m a runner, I find myself spending a lot of time putting together my annual race calendar. There are a lot of factors to consider: schedules, travel plans, budgets, holidays. I try to be considerate of the time I am taking from my family, and also try to ensure that Mr PugRunner is able to train and register for the races he wants, too.

There is one other thing I am keeping in mind as I make my plans: giving back to the community that has given so much to me. Which is why I spent this past Saturday morning volunteering at the Jacksonville Bank Marathon.

Kristin actually suggested this one to me, and since I wasn’t planning on running anything as I recovered from Space Coast and prepared for ZOOMA, it seemed like a grand idea.

I was really excited about being able to experience a race from the event side (as I have a background in event planning and management) and it was important to be able to contribute something to a local race. Volunteer support is critical to the success of an event and it also provides a different perspective, which can be pretty valuable.

Kristin and I decided we would work at the finish line with medal distribution. We were a little ambitious and signed up for three shifts, and when all is said and done, I wish we could have stayed longer. As race day got closer, Kristin mentioned thinking it would be nice to work at one of the aid stations on the course, but looking back, I think we were in a pretty good location.

Things were pretty crazy around here with my mom and stepdad in town, Christmas, a quick trip to Orlando and other things, so I wasn’t paying much attention to the weather until someone posted on Facebook that we were expecting temperatures in the high 60s with a 60% chance of rain.

There was nothing to be done, and when my alarm went off on Saturday morning (ok, let’s be honest. Four-thirty is too early to be considered morning), conditions seemed decent. It was a little warmer than I expected, and the sky wasn’t too cloudy. I probably should have remembered a poncho or lugged along Mr PugRunner’s waterproof jacket, but I was feeling brave. My only nod to the rain potential was to bring flip flops and a visor.

Parking was kind of a nightmare (although I had been warned of this in the email I received). I wasn’t really familiar with the race area, and it was dark out, so finding a spot was a little unnerving. Fortunately, I followed some cars and people dressed in running clothes to a residential street a few blocks away from the starting line and managed to get a spot along the curb. I had to write down the street names on the intersection so I could find the car later, though, because I had no idea where I was.

As I was walking towards the start, I heard someone call my name. It was Kristin. She had just arrived. I hopped in her car and helped direct her to a spot. Like an angel, she had stopped at Starbucks and brought coffee (thank you!).

The start line was crowded and busy and we didn’t really see anyone “in charge.” The race was supposed to start at 7:00 and our shift at 7:30 so we decided to watch the runners cross the start and then find our station, rather than bother the volunteers who were working at the bag check-in.

After the gun sounded, we found our way back to the finish line and located one of our contacts. We met up with the rest of the medal volunteers and got to work. 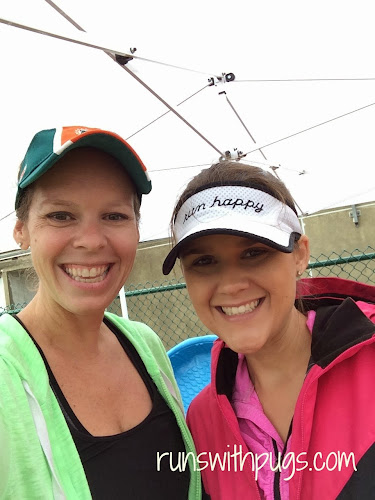 We were set up about 20 feet from the actual finish line, under a few tailgate tents. We had a ton of boxes, filled with medals for both the half and full marathons, each individually packed in plastic bags. Before the finishers came in, we had to unpackage and hang the medals on a wooden rack and then bring them out to the finish line to hand to the runners.

We jumped in right away.

It was actually kind of relaxing work – rhythmic and simple. We chatted with the other volunteers and got to glance around to see all the water and food stations being set up. It was kind of neat getting that behind-the-scenes look.

In the meantime, clouds were rolling in and the wind was kicking up. I’m not sure when it started, exactly, but at some point, the heavens opened.

I cannot begin to tell you how miserable it was. And if it was awful for us, under a (leaking) tent, I can’t even imagine how it was for the runners out on the course. As half marathoners began to cross the finish line, we heard reports of horrible humidity and even worse visibility. In some places, the rain was so hard, runners couldn’t see the road. Ugh.

Even with our protection, my feet and legs were drenched. We had to push up on the tarp to dump water several times to minimize leaking under the tents, and got soaked in the process. It was freezing, too, despite the humidity, and I was glad to see that the runners were able to get space blankets and soup to warm up.

Our group just kept unwrapping and hanging and handing over to the volunteers who stood at the actual finish line. After the bulk of the half marathoners had finished, we had a bit of a break until the marathoners would start crossing, so we mostly gathered back under the tent, had a little something to eat and drink and worked at cleaning up the mess of disintegrating boxes and plastic bags. 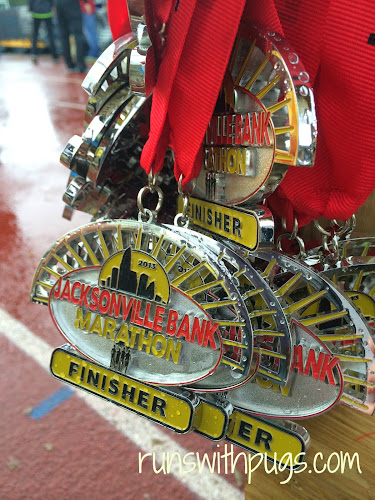 The rain stopped for a bit and the sun struggled to come out, but it was a brief respite before coming back with a vengeance. Finishers huddled under any overhang or tent they could find, shoes off, sweaty and soggy.

Kristin and I were scheduled to stay until 1:30. At around 12:30 or so, the race staff started breaking things down. It was a long process, and the finish line remained intact. At about noon or so, one of the guys reported that there were 40 people still out there. They started trickling through, to applause and cheers, and I really wanted to be there for the very last runner. The staff reported the last marathoner as still five miles out, and there is no way we could have stayed. I know she had family or friends waiting on her, so I know that someone was there to give her the (very deserved) medal when she crossed the line.

It was an eye-opening experience.

I loved being at the finish line. Even with the miserable weather, it was exhilarating to see the runners come through – some were elated, some were so stricken with emotion that they didn’t seem to even know where they were. Some grabbed their medals and bounced off while others fell sobbing into the arms of family and friends. Many were running their first big race. One man was completing his 300th marathon. You couldn’t help but to smile and feel your heart warmed.

It was harder to see other finishers. The conditions were tricky: cold AND humid, which led to dehydration and cramping. We saw faces stained with tears and singlets stained with blood. Two gentlemen flat out collapsed after they crossed the timing mats, victims of what seemed to be excruciating cramps. It was agonizing to see them, curled up in puddles, screaming, and being unable to help them. The EMTs were awesome. They had to move their home base inside after a few rumbles of thunder, but they kept staff right near the finish line to keep an eye out for runners who were struggling. They deserve a special round of applause for their attention and care.

I would have liked to have had an FAQ sheet for information to help some of the runners and spectators. With the conditions, results got moved around (obviously, pieces of paper posted on a chain link fence in a monsoon isn’t going to be too successful) and we weren’t always sure where to direct people with questions. We learned quite a bit on the job but it would have been nice to have correct answers when asked.

The other thing I learned is that, no matter how much oxygen or energy it takes, I plan on thanking every single volunteer who crosses my path at every race I run (I always smile and usually say thank you, but it’s going to something I’ll pay more attention to). Whether handing out medals, or distributing water, or collecting bags at check in, they work their butts off and without them, the race experience would be significantly reduced. I was disheartened that some of the runners and spectators were less than polite, no matter how hard we may have tried to help them or answer their questions or point them to someone who could help them.

It was a privilege to be witness to everyone’s story that day. There was triumph and defeat, elation and disappointment, but at the end of the day, every runner overcame adversity, no matter their official results. I was proud to be a part of it.

And I was also thrilled to meet fellow ZOOMA Ambassador, Meghan! She was running her redemption race and did an awesome job! I also met Caitlyn and I am looking forward to getting to know both of them better!

I am planning to volunteer for at least one race a year. This is a great one, since it falls at a time of year where it’s hard to squeeze in an actual race on the calendar. There are others during the summer that might work for me as well, when I don’t plan to be racing because of the heat. It was a great feeling and an amazing experience and I was glad to be a part of it.

Have you ever volunteered at a race?