You are here: Home / Uncategorized / in which i start over. sort of.

One of my friends, K,  has been talking about starting running. She recently had her second baby and she wanted something to get back into shape. She has seen many of our immediate and extended circles begin with Couch 2 5K, finish the journey and move on to the next levels (depending on everyone’s individual goals). However, K was nervous about doing it on her own. Since she lives close to me, I agreed to run two of her three daily weekly sessions with her.

We were supposed to start last week, but frigid weather and the potential of “wintry mix” were factors. She wasn’t interested in any of that, and I can’t say I blamed her one bit. We decided to reconvene this past Tuesday night, after dinner (giving me long enough to make sure little man was in bed).

Since neither of our neighborhoods is ideal for nighttime running, with lighting and sidewalk issues, we selected another one for our joint training. We met at the appointed time and took a few minutes to get set up: me desperately trying to beat the laces on my right shoe into submission, she getting her new C25K app started.

It’s been a while since I worked with an app, but the structure of this one seemed fine. For day one, we would do a 5:00 warmup, followed by eight sets of 1:00 running/1:30 walking and finishing up with a 5:00 cool down. Easy enough.

We were about one set into running when we felt the first of the raindrops, and we were on our third set of run/walks when the heavens actually opened.

It was so ridiculous. Not in a funny way.

But, we were almost halfway, and we were already wet, so there was no point in turning back. On the plus side, the cold rain absolutely took K’s mind off the fact that she was running. I can’t say it was enjoyable (I know that I hate running in the elements, so I can’t imagine she was much happier about it), but it felt good to press on.

As the rain fell harder, I made the executive decision that in lieu of a cool down, we would make a mad dash for the covered overhang of the amenity center and mill about there instead. Obviously, not something to skip regularly, but given the circumstances, completely warranted.

Especially when the heavy drops started driving into my eyes and messing with my contacts. I was rendered practically blind for a few minutes, because  the excess water made my lenses blur and move around on my eyes. Not the most fun, especially when I still had to drive home. Fortunately, the downpour slowed to a light drizzle (how convenient, Mother Nature. Thanks for the laughs) and I was able to get my vision right again.

Without the cool down, we netted 1.22 miles. Not so bad for K’s first go. She said she felt really good afterwards – not winded or overworked, which is great. I’m so proud of her and so glad her overall impression was positive. I hope she’s looking forward to her next session as much as I am. 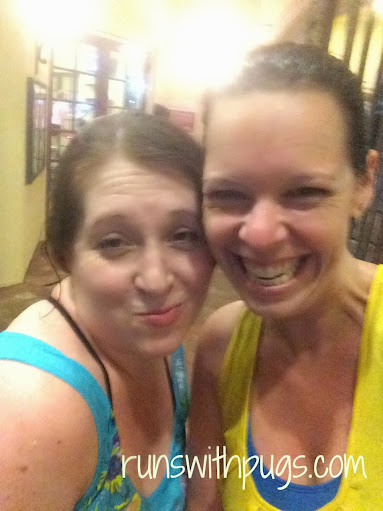 Oh, and I guess it’s safe to say I’m keeping the new shoes after the beating they took last night. I cringed every time I hit a puddle. They came through alright, though – not too dirty.

So now, I’m out the door for this week’s speed work. Hopefully, last night’s run/walk was a nice little warmup for this morning (Incidentally, the temperatures are significantly higher than this time last week so I’m going to be a lot happier about it).

Don’t forget! There’s still time to win a free entry to The Flavor Run in Jacksonville on April 5. Check it out here! It would be especially great for new runners, a fun girls’ morning out or for some family togetherness.