A little over a month ago, I got a bit of a bug up my butt about the all-new Seven Dwarfs Mine Train.

I really needed to ride it.

Since our Disney annual passes would be expiring soon, I decided to plan a quick day trip to the House of the Mouse to celebrate the end of the school year. It started out very simple. On the day after school ended, little man and I would hop in the car early enough to arrive at Magic Kingdom at rope drop. We would ride our three Fast Pass + rides, along with anything else we managed to find with a short-ish standby line, and head home in the early afternoon.

We invited Mr PugRunner. He has been incredibly busy with work, but decided he would join us for the day.

Then he got an email with a special offer for stays at the Hilton Bonnet Creek. We couldn’t turn down the savings, so he booked a night there.

Then I started looking around for some kind of breakfast at the resort, and realized it was still Star Wars Weekends. On a whim, I called Disney Dining to see if we could score a reservation for a Star Wars specific character dining experience, newly introduced this year.

Somehow, I got lucky, and we scored a 9:40 AM slot. We would stroll into Hollywood Studios after the early crowds, perhaps jump on a ride and see a character, eat and enjoy the experience and skip out before the motorcade. Done and done. Mr PugRunner would be thrilled at the leisurely approach (far different from the commando method I implemented last year.

And so our weekend was planned. We packed, double-checked our FP+ reservations, and counted down to the big day.

On Friday morning, we loaded up the car and hit the road. We drove separately. After we left Hollywood Studios, little man and I would be continuing on to visit with my grandmother for her birthday, while Mr PugRunner had to get back due to some other obligations. We managed not to hit any traffic, and got to the parking lot at about 8:40 AM. We weren’t too far from the entrance, so we skipped the tram and chose to walk to the Ticket & Transportation Center.

The monorail was broken down, and there was a sizable line for the ferry. I had been hoping to be inside the park no later than 9:15, so that we could maybe hit some of the features in Fantasyland before our 9:45 Mine Train FP+ time, but time passed, and it became clear we wouldn’t have much leeway. I  always get anxious over holdups and delays, but we tried to remain positive, using the time to apply sunscreen, talk about other things we’d like to do, and make a game plan for the rest of the day.

Finally, we were on our way.

We went through bag check and the turnstiles, and finally emerged on to Main Street.

We followed the street around the hub and past the castle towards our goal, only to be halted by the fact that Mine Train was, in fact, broken down at the moment. Womp womp. The cast member on duty told us not to worry, that our Fast Passes would be valid all day, and to just check back to ride later. I do have to say that there were some dedicated guests who remained staunchly in the standby line. Lord only knows how long they had been waiting, and continued to wait, in the blazing sun, but props to them.

Somewhat deflated, we got a snack of hummus, chips and veggies, and Mr PugRunner made plans to meet up with his friend and family, who were also visiting Magic Kingdom that day. While they finished up in Tomorrowland, we visited Goofy’s Barnstormer, Voyage of the Little Mermaid, used our second Fast Passes at Peter Pan’s Flight and then hit Prince Charming’s Carousel.

Our friends found us and as the kids went on the Carousel a second time, Mine Train opened back up (it was about noon). Since our friends also had Fast Passes, we decided we would all ride together, and got in the queue. It moved very quickly – so quickly that I really didn’t get a chance to take it all in, other than the fact that it was dark and pretty mine-like. In fact, my eyes had some difficulty adjusting to the extreme change in lighting.

Somehow, Little man and I ended up in the front row. Bring it on.

The ride was great. It wasn’t a thrill coaster by any means (nor was I expecting it to be), but it was long, the swinging cart technology was pretty cool and unique, and the theming inside with the jewel mine and dwarfs was really cute. There were some fast turns, some little drops and some cool things to see. Little man LOVED it. I’m so glad we got to ride.

At this point, we were getting hungry, and still had some time before our last Fast Pass at Big Thunder Mountain Railroad, so we went to one of our favorite counter-service places, Columbia Harbour House, for their delicious Broccoli Peppercorn Salad. We then said our goodbyes, and parted ways.

After Big Thunder Mountain, we got a chance for a break. Mr PugRunner had to take a phone call, so we got little man his first Mickey Bar (how it has been this long, I have no idea)

and I offered to go to a Fast Pass kiosk to get one last time for the day, while the boys headed over to Tom Sawyer’s Island. To be honest, I don’t think I’ve ever been there, and it seemed like a chill place for everyone to hang out while Mr PugRunner got his work done.

There was one thing I couldn’t manage to get for this trip, and that was a Fast Pass for the Anna and Elsa Meet & Greet. Like most other children, little man loves Frozen, and it would have been great for him to be able to share an interaction with them. He didn’t know they were doing photos and autographs, but he did see a sign saying that Anna and Elsa would be featured in the new Festival of Fantasy Parade (this whole “reading” thing can be a blessing and a curse), so we found a place to watch, over by Splash Mountain.

We had a great spot, but for one cluster of women, there on some kind of wild girls’ trip, who behaved really rudely: they were jumping, elbowing, leaning against the rope to reach out to the characters. Cast members had to admonish them several times, and it was really unfortunate that they couldn’t behave politely. However, the parade was magnificent. It was a refreshing change in floats and costumes, and we loved getting to see some of the newer characters on display.

Of course, the stars of the show were Anna, Elsa and Olaf.

My personal favorite was the huge, steampunk styled Maleficent dragon, which breathed fire at a somewhat less impressive Prince Phillip. 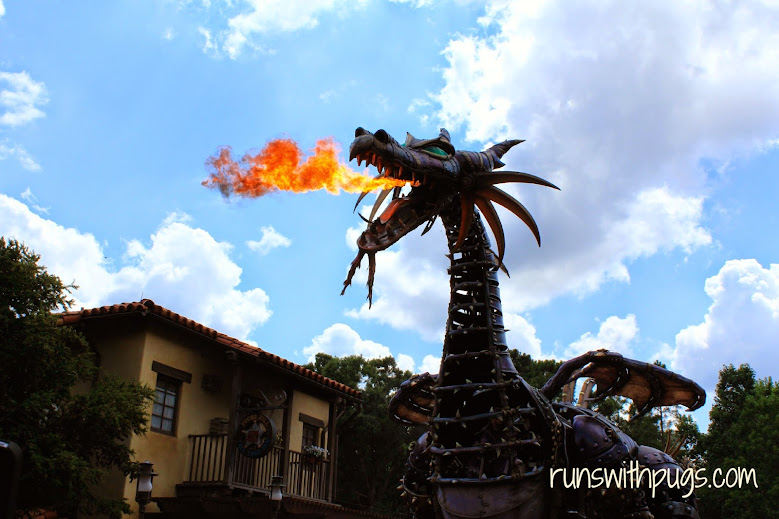 Since we were at the end of the parade route, we were able to follow the parade all the way to the hub, and see most of the floats pass the castle, on our way back to Buzz Lightyear’s Space Ranger Spin.

We very rarely see the parades from that vantage point, so it was a nice experience.

We rode our last ride and then it was time to go. It was hot and getting more and more crowded. We toyed with the idea of meeting up with our friends to dinner, but then we decide that we just wanted to go back to the hotel, eat something there and maybe go the pool before bed. Maybe.

Hilton Bonnet Creek has some great casual restaurants, but Mr PugRunner was in the mood for Italian. We had noticed La Luce many times, but it always seemed a bit intimidating as a place to go after a day at a them park, with a tired child in tow (read: lots and lots of white linen). Upon check in, Mr PugRunner inquired if we would be ok to dine there as is, and they said absolutely.

Dinner was magnificent. Mr PugRunner ordered the Spaghetti alla Vongole, which he pronounced different from his favored linguine and clams, but full of flavor and very tasty. I chose the daily risotto, which was creamy and studded with slices of grilled sausage, red and green peppers and provolone cheese. I didn’t come close to finishing it, but not for lack of trying. The boys wanted dessert, but I was pretty full, so I offered to split the La Luce’s famous butterscotch pudding with little man. 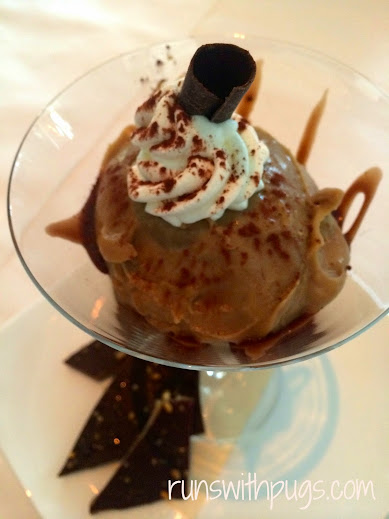 Served with real whipped cream and homemade toffee dipped in dark chocolate and sprinkled with sea salt, this completely lived up to the hype. Had I know how delicious it was, I might have skipped dinner entirely and gone for two servings. We will definitely be keeping this particular restaurant in the rotation when we stay at the Bonnet Creek again.

Stuffed, we went back up to the room. Mr PugRunner and little man opted for a dip in the pool, while I took a nice, long bath and tucked into bed early. I was exhausted. I think we all fell right to sleep that night, with dreams of Hollywood Studios in our heads.

If you’re a Disney lover, have you had a chance to try out Mine Train yet? What did you think?