One of the things we look forward to in the summer is getting to vacation with my brother- and sister-in-law and their kids. We normally spend a few days in the Orlando area, usually going to Disney, but this time, they mixed it up and chose Vero Beach as their destination. Plans were made and early on Sunday, we took the drive to Disney’s Vero Beach Resort. 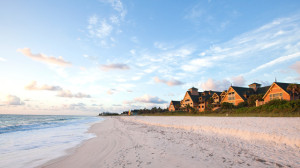 This particular resort, somewhat surprisingly, was very unassuming, positioned on the corner of a rather typical intersection, neither really set back nor glaringly obvious. Once inside, however, it was like the main road didn’t even exist and we were transported to another world.

We arrived in time to enjoy brunch at one of the hotel’s several restaurants. Offerings included custom omelets, pastries, Mickey waffles (of course), chilled seafood, roast turkey and some other yummy things. Little man was most ecstatic that he got to have macaroni and cheese and a little dessert before noon. It’s the little things.

Our room was huge and lovely, with a private balcony overlooking the Atlantic. I was a big fan of reading in bed, with the french doors open, listening to the waves and enjoying the breeze.

On that first day, we loaded up the beach bags and headed down to the water. The waves were a little rough, but it was perfect for little man to try out his first boogie board. He did great! 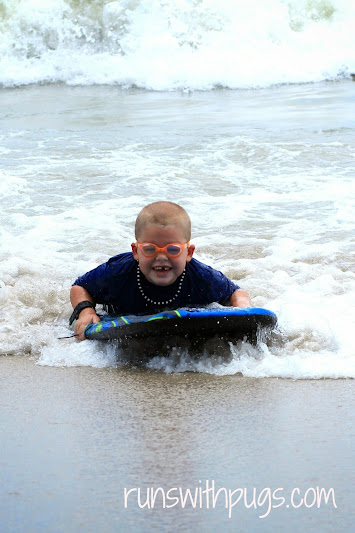 The storm clouds gathered and dissipated, and we moved to the pool across the walkway, so that we would have a shorter sprint if the heavens opened. The cousins played on the twisty water slide and swam, and finally, we headed back up to the room so we could get ready for dinner at Squid Lips. It was a really fun and casual restaurant with a gorgeous view of the water. There was live music and a beautiful coastal breeze, and the food was pretty delicious, too. 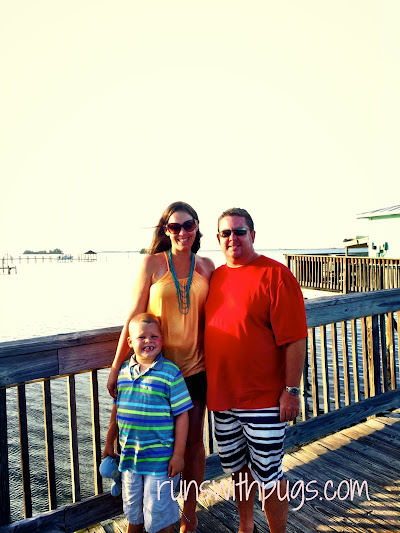 We lingered, enjoying the company and conversation, until it was time to call it a night. That fresh salt air can wear a person out, and mostly everyone was heading out super early the next morning on a fishing charter, so they need some shut eye. Since I was staying firmly planted on dry land, my plan was to stay up late on the beach to see if I could catch any sea turtles hatching from their nests.

Vero Beach is apparently home to a huge contingent of nesting loggerhead and green sea turtles. The beach was dotted with staked off nests, just waiting for little hatchlings to emerge. 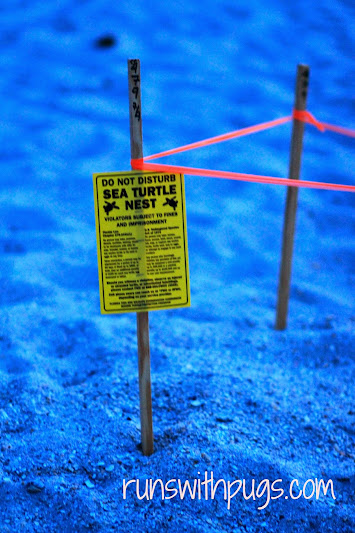 The babies usually emerge at night, heading down the beach, attracted to the moonlight dancing on the waves. The resort asked that if you visited the beach at night, to refrain from using flashlights or artificial light, and to keep the drapes on your room closed after 9:00 PM to avoid distracting the babies from their journey to the sea.

I didn’t last long. The sunset was obscured by the clouds, and as a result, the moon wasn’t all that bright either.

I planned to get up early and check out the beach in the morning while the other were heading to the boat, to see if anything had happened overnight.

Imagine my surprise and delight when I noticed two sets of tracks, clearly visible from our window! 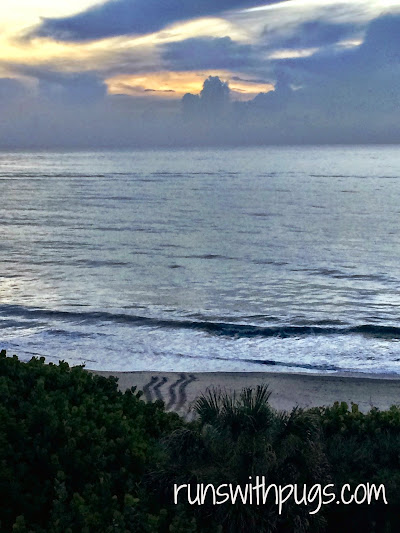 I wasn’t able to investigate right away, because I wanted to say goodbye to the family as they departed on their fishing trip, but we later learned that a mama loggerhead turtle had come up to nest in the night. The new nest was marked and the eggs will hatch in 45-60 days.

The rest of the day was pretty quiet. I went for a run (more on that in my weekly recap), and then my sister-in-law, nephew and I went to see Transformers: Age of Extinction. It wasn’t the best, but it definitely helped pass time on a low-key rainy day. In the meantime, little man was having a hard time on the charter. Just like his mama, he got violently seasick (three times).

Catching some fish helped make up for it. No matter whatever else is going, that kid can always whip up a beaming smile.

We had planned to attend the character dinner at the resort, to meet Pirate Goofy and Pirate Donald, maybe followed by s’mores at the campfire. Unfortunately, our reservations were at 8:05, and quite frankly, we were, to quote little man, “plum tuckered,” so we canceled our original plans and ventured out to a tiny but tasty Italian restaurant (whose name escapes me) down the street. We took our time, enjoying the meal, and also enjoying the view. A storm was rolling in and the clouds gathering over the water were just magnificent.

As we were driving back to the hotel, the storm cleared enough to yield to this stunning sunset. I actually made Mr PugRunner pull over, turn around and then let me out to run (barefoot) up a bridge to capture it.

Since s’mores were cancelled and lightning was still coming down, rendering a late-night beach walk dangerous, there really was nothing left to do but go to bed.

However, with the morning came a new set of turtle tracks! Little man was awake, and so, in our pajamas, we scampered down to the beach to check things out.

We were there before any of the biologists came to investigate: the first one rode by to mark the trail, while the second one offered more insight into the nest.

It was so amazing to see those eggs. Apparently, each turtle lays about 100 of them. They are soft and papery, rather than hard, and buried beneath the sand. The biologists dig down just so they know where to set up stakes to mark the nest as protected. Getting an inside look at that was indescribable. I only wish that we had seen some of the babies, making their way out to sea.

All too soon, it was time to pack the car and make the drive home, but we definitely plan to return. It was too peaceful and beautiful not to. We enjoyed this particular hotel, but there are other properties in the area that would be great to try as well, and I hope we get the chance to do so.

Do you have any vacation spots relatively near your home that you visit?

Do you vacation with family?

14 Responses to vacationing in vero