This time next week, I will (hopefully) be strutting (or hobbling) around a theme park, weighed down by some golden bling

eating all the things and taking all the selfies. Pictures or it didn’t happen, right?

It’s all come down to now.

Talk about pressure. I’ve been training for more than half a year. So many hours and miles and words dedicated to what amounts to five or six (or seven) hours. Not counting staging and corral time. Which is eternal.

I’m not sure how I’m feeling. I’m waking up incredibly early in the mornings and it seems like I am grinding my teeth while I sleep. Way to stay easy breezy, right? I need to get myself together.

After running 20 miles on Saturday, it seemed prudent to take a day (or two) off. But that didn’t mean I was off the hook from my alarm.

Kristin and I were meeting at the Jacksonville Bank Marathon to cheer on some of our wonderful friends and all of them (we had volunteered at the same race last year) . For one of them, it was a complete surprise. A bunch of us had gotten together to make some inspirational posters (sayings included “Humpty Dumpty had wall issues too” and “Your feet hurt so much because you are kicking a$$!”) and we were thrilled to show them off. 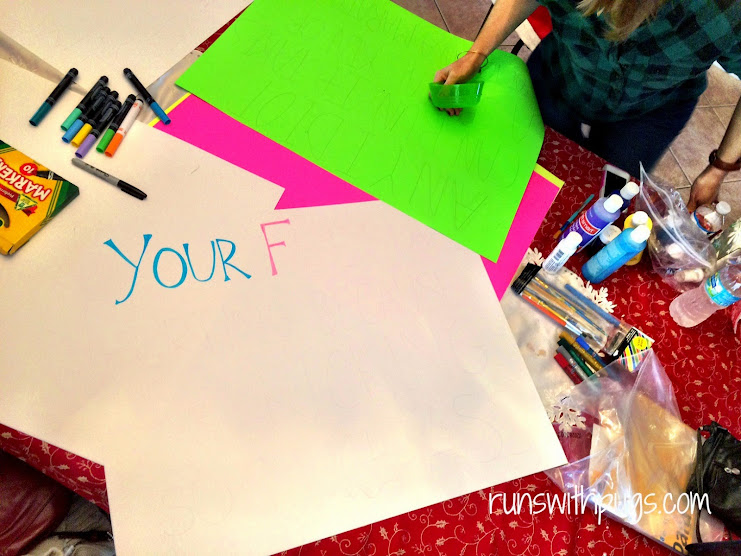 We arrived in time to watch a lot of the half marathoners coming in to the last bit of the race: a turn to the track, which looped to the finish line. Even better, we got to wave to a bunch  of our friends. Then we took a bit of a break and headed into the stadium to hang out and wait at the finish line for our marathoners. Watching them come in was, once again, inspiring and awesome. So proud of these athletes.

I need to point out that the weather, again, was miserable. Last year, it was humid with a torrential downpour. This year started out cold and misty, and quickly changed to muggy and hot with a fully blazing sun. The athletes definitely suffered and it was hard to watch.

However, we had yet another reminder of why the running community is the best. Less than half a mile from the finish, a young man fell down. It seemed like he was cramping. A bike rider stopped immediately to assist, and had some difficulty getting him back on his feet. The runner’s legs just weren’t cooperating, and so the cyclist began supporting him to walk. A woman stopped her race to get under the runner’s other arm, and the three of them walked their way to the finish line. It was beautiful and a reminder of how amazing and selfless people can be.

We met my parents for lunch at one of my favorite BBQ joints. Delicious.

Mr PugRunner took the afternoon off work so we could all go see Night at the Museum: The Secret of the Tomb.

I wasn’t sure if little man would be into it, considering he hadn’t seen the first two movies in the series, but apparently, inappropriate monkeys are hilarious regardless.

It was a little sad to see Robin Williams on the big screen in one of the last movies he made in his lifetime, and I teared up a bit towards the end in an exchange between Ben Stiller’s Larry Daley and Williams’ Teddy Roosevelt:

Larry Daley: I’m not sure what I’m doing tomorrow.

Amazing how a little twist on perspective can change things around.

We ended Tuesday with an epic sunset.

New Year’s Eve! It was a busy day.

We had a few errands to run and then we were off to an early New Year’s Eve party so the kids could have a faux countdown and drink sparkling cider and celebrate before actual midnight.

We hung out with our friends, and then made the trek to Nana and Papa Bear’s house for NYE Part II. We snacked on delicious appetizers and then lit some sparklers outside.

Little man was staying for a sleepover, so we scooted home before it got too late. I was exhausted and have to admit that I couldn’t make it to midnight. I had a few sips of champagne before I had to call it a night.

New Year’s Day is Mr PugRunner’s birthday. I let him sleep in a bit, since little man wasn’t home and we rarely get the opportunity. We went out to breakfast and then chatted with my parents to formulate a plan for the rest of the day.

Little man had been busy. He had participated in the community’s Polar Bear Plunge, jumping (or sliding) into the pool in 48F temperatures. Brave child. I don’t know that I would have had the gumption to do the same.

Not even for a hug from the Polar Bear himself.

We kind of lounged around the rest of the day and then met up for dinner at Bonefish Grill. After a lovely meal, it was back to the house for ice cream cake and presents.

We had lunch with a friend and her daughter and then visited the book store and walked around the outdoor mall a bit. New books in hand, we went home to finish working on little man’s Christmas present. 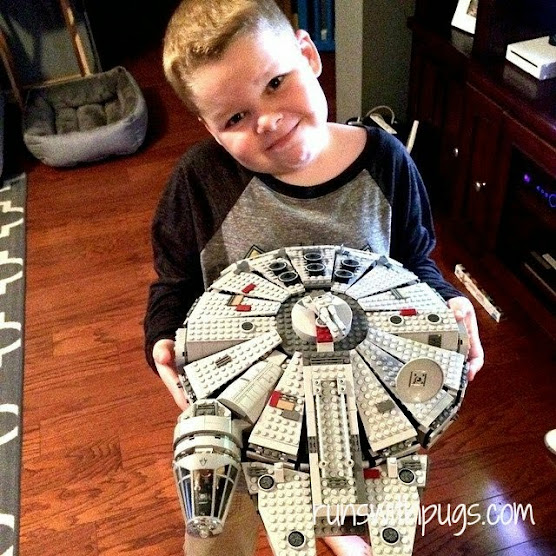 Much as I wanted to do the whole thing myself, I sat on my hands and offered assistance only as requested. He did an amazing job, and it is just so cool. Not ashamed to admit I’ve played with it a bit.

This was a great morning. I got to meet up at 1st Place Sports with some of my fellow ZOOMA Florida Ambassadors for the last training run before ZOOMA Florida in Amelia Island on January 17. There were three groups of runners, going distance of ten miles, six miles and three miles, with pacers, as well as some great giveaways from Feetures! I am incredibly excited for this race in just under two weeks. It’s going to be so much fun!

Later that evening, we celebrated Nana and Papa Bear’s seventh wedding anniversary. We had a delicious Italian dinner and stayed up way too late in the lobby of their hotel, just chatting and enjoying. It was a lovely night and we wish them continued happiness.

The taper continues this week. I have a few planned runs, to keep my legs loose, but I guess we shall just see how it goes. I am going to pay special attention to my water intake as well as my nutrition this week. I have already made some hard boiled eggs for meals and snacks, and will be focusing on lean proteins and staying away from anything too sugary or fatty.

How did you celebrate the coming of 2015?

What are your best tips and tricks for getting through the taper?