Boarding and embarking on the Disney Dream here.

Our first night at sea here.

When we woke up, we were pulling into Nassau.

And it was my birthday!

Mr PugRunner, little man and I had no plans of leaving the ship that day. He and I had already been to Nassau (read about our trip to Atlantis here and here), and we didn’t think little man would enjoy shopping in the port or wandering around town, when there was a whole ship full of activities waiting for him.

My parents, on the other hand, did want to get off the Dream to see the Bahamas. We thought that would be great for them, especially since it would be my mother’s first time out of the country.

We are early risers, so we enjoyed our verandah a little bit as everyone was showering and getting ready.

Our plan was to meet for breakfast in the Royal Palace. Darmika had advised us that it was the best breakfast on the ship, and since we don’t love buffets, it sounded right up our alley.

On our way down, we swung by Guest Services. The CM who helped me with the race registration had said to come on down to get my birthday button, and so of course I did. The CM on duty also gave little man and Mr PugRunner buttons that said “I’m Celebrating!”, which was super sweet.

At breakfast, little man was thrilled that the bread service prior to the meal included chocolate glazed donuts (stay tuned for a post devoted to the meals and dining areas).

They boys and my parents treated me to some lovely gifts for my birthday: a Pandora charm, gift card to my favorite running store and some awesome new sunglasses! So sweet and so generous. 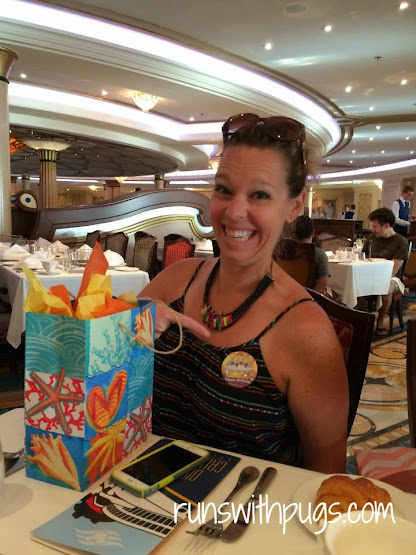 As we finished our meal, the Captain announced that guests were clear to disembark the ship, so we said our goodbyes, planning to meet at the Cabanas dining area at around 1:00.

And then? Well, the day was ours. Little man had gotten wind that Avengers: The Age of Ultron was playing onboard, and there was a 10:30AM showing. In 3D. Whoa. Even though he had just seen it, the idea of seeing a movie on a ship was pretty tempting, so Mr PugRunner agreed that they could go (I was doing well on the motion sickness front, and had no desire to try my luck by sitting in an enclosed room with 3D, so I was out).

We had movie theater snacks in the room, and when we returned, Patrice had left a little gift in the form of three bandanas for Pirate Night, and another birthday button. Awesome! 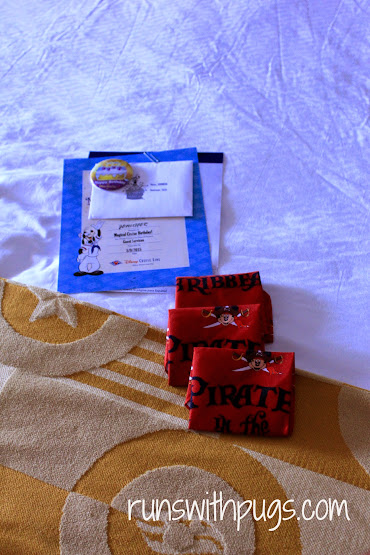 We did a little exploring of some of the lower decks while we waited for showtime.

Left to my own devices, I decided to take my book and go to the pool deck to read. It was busy, but not chaotic and I scored a table with a little view of the Funnel Vision so I could have a movie running in the background. It was fabulous.

I returned to the stateroom to pack the pool bag and then it was time to meet.

Nana and Papa Bear had a great time exploring the shops in the port. I think that next time, they will probably venture further and try out Atlantis.

We had a lovely lunch with a glorious view.

Back to the pool!

The pools were definitely more crowded than earlier, but little man didn’t seem to care. CMs came out to lead some games, and the kids had a blast participating and cheering others on. So cute.

And of course, there was plenty of time to chill out with Papa Bear and a frosty drink.

After a while, little man wanted to hit the Oceaneer Lab so we got him checked in and returned to the adults-only pool. We enjoyed a drink and I was able to do a little reading, before the wave phone buzzed and little man wanted to be picked up. It was time to start getting ready for dinner, anyway, so I packed it up and we headed for showers.

We were excited for Pirate Night!

Before our seating time in Royal Palace, I wanted photos with Pirate Mickey, so I got on line with Mr PugRunner and little man finished getting ready. 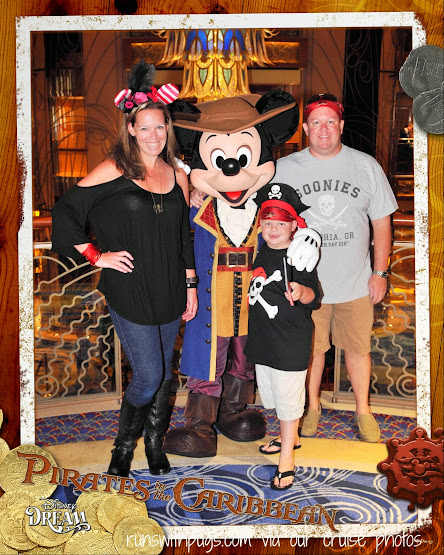 We also managed to get right up to Pirate Minnie!

And then little man wanted to do pictures in front of some of the backdrops that were available. 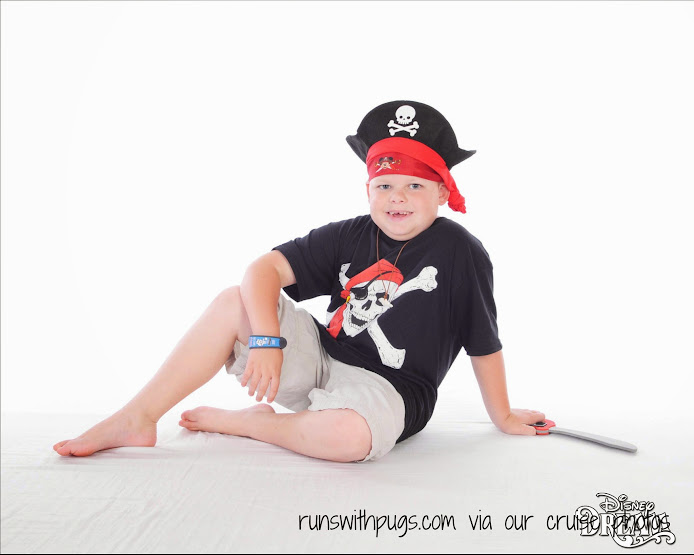 Feeling very pirate-y, we sat down to dinner,

and I was treated to a special birthday dessert and a song from the servers. 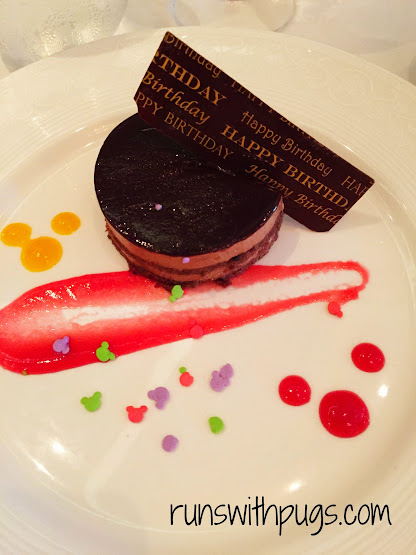 And then we made our way to Deck 11. The main elevator bank was slammed, but one of the CMs passed the tip that if we just walked to the bank located towards the back of the ship, we would probably have no wait. He was right, and we got up to the pool deck with no hassle. 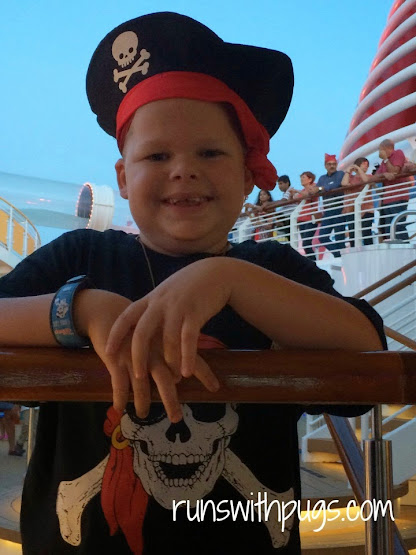 The pools on deck had been covered to make way for the huge dance party that was to go down, and the deck was hopping!

There was a great stage show that was also mirrored on the Funnel Vision, for those who might not have had a great vantage points. 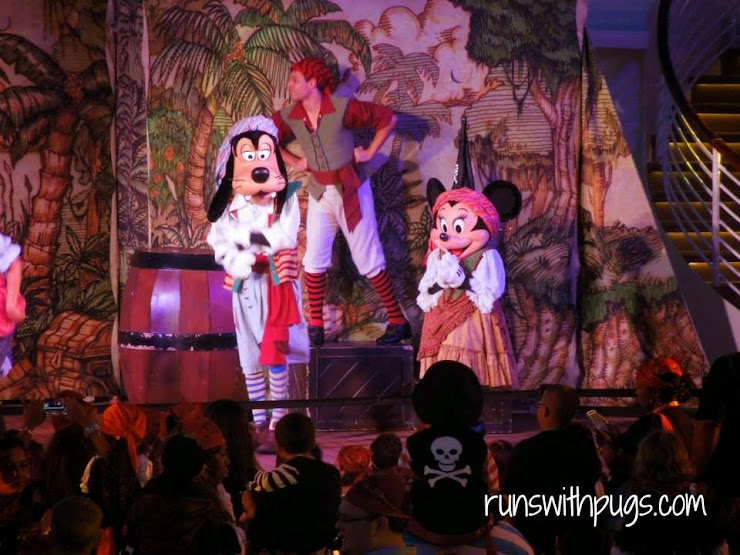 Cast members were set up throughout the crowd to help lead the dancing and singing and a lot of the kids were thrilled to follow along!

The party lasted maybe 30 minutes, wedged neatly between main seating and second seating. It was very cute, featuring appearances by lots of great characters like Pirate Mickey and Captain Hook, and it was awesome to see everyone all dressed up in their own pirate gear (thanks to my friend T for insisting that I borrow her Pirate Minnie ears for my outfit).

We especially loved this pirate’s parrot.

Papa Bear, Mr PugRunner and little man certainly got into the spirit of the evening.

But the grand event was still to come! Fireworks!

Disney Cruise Line is touted as the first line to offer fireworks displays from a ship. The show is weather permitting, and we were lucky that the windy night wasn’t a factor.

It was a late night! The fireworks were scheduled to start at 10:00 PM per our Personal Navigator, but after a live-action show (featuring the incomparable Captain Jack Sparrow), it was 10:30 before the first one lit the sky.

I will admit to goosebumps. And not just from the chilly wind.

It was a beautiful display, with fabulous accompanying music. We probably could have stayed out there all night! Once again, we missed the live stage show, but unfortunately, we couldn’t be in two places at once, and I couldn’t see missing out on fireworks at sea.

However, all good things must come to an end, and we made our way back to our stateroom for the night. We were on our way to Castaway Cay and we were all excited for a day on this island!

How do you prioritize scheduled activities on vacation?

When traveling are you an early bird, a night owl or do you burn the candle at both ends and hope for the best?